An Instance of the Guidelines Post and Book Giveaway 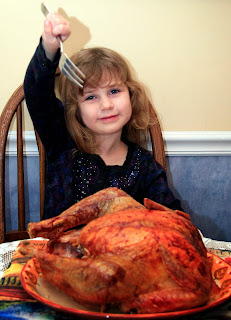 An Instance of the Guidelines Post and Book Giveaway

When Jay Hartman of Untreed Reads put out submission guidelines for The Killer Wore Cranberry: Room For Thirds, I was intrigued.  The first two Thanksgiving anthologies had done very well.  Jay has published two of my books.  He actively promotes publications to a worldwide audience.  Untreed Reads editor, K.D. Sullivan, had done such a wonderful job with my work that my books ended up sounding more like I had written them than my initial submissions did.   If you’ve ever had a truly outstanding editor, you know what I mean.

The only problem was that in the guidelines Jay made it clear he wanted a story that used a food associated with Thanksgiving as the murder “weapon” and the story had to be funny. I had no idea on earth of how to do that. One person killing another person has never struck me as particularly humorous.

I immediately started writing... something else.  But the idea of combining such disparate elements as murder and humor was percolating quietly in my mind.  While visiting my mother, I picked up The Dream of Scipio by Iain Pears.  He is the author of An Instance of the Fingerpost, which may well be the best historical novel I have ever read.  The Dream of Scipio is a wonderful complex novel set in three time periods with themes that hold the book together.  I recommend it highly.

Ordinarily I would have just read and enjoyed the book. I might have written a review for WWK.  However, thanks to Delta Airlines, I had five hours with very little to do  at a so-called “departure gate” inside the airport terminal in Provo, Utah.  So I savored the book in small bites in between walking the floor and talking with my mother.

I also had time to analyze some of the techniques Pears used.  I don’t mean to over-simplify but I recognized one technique as the author describing in some detail what would have happened but did not happen due to trivial events.  It occurred to me that I could use a similar method to help me construct an amusing homicide.

As Steven King has written, it takes two or three “moving parts” to create a short story.  I had one but, an idea plus one usable technique is not enough scaffolding to support a story.  I started writing. I created something resembling a puffed up outline.

Then I noticed Pears also had a tight sequence of events for each major character, interrupted at intervals by the tightly knit plot involving a different character and time. When I added that to the other piece plus the idea and the guidelines, I was able to write an actual short story.

Of course, I didn’t know how successful I had been for some time.  Now, you can read the story and see for yourself.  The Killer Wore Cranberry: Room For Thirds is now available at the Untreed Reads store.  You can even buy all three for a special price at http://store.untreedreads.com/ 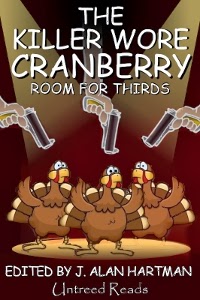 Also, thanks to the generosity of Untreed Reads I can offer a free copy to someone chosen at random who leaves a comment and a working email address.

Has reading a particular book or author effected your writing?
Posted by Warren Bull at 12:00 AM

Isn’t it interesting how writers combine elements they stumble across into their own unique work. All stories have been told before, but never in just the same way. Congratulations on another publication success.

I loved the first volume and need to buy the second and third anthologies. I wrote a short for the second, but it wasn't picked for inclusion. Maybe next time, but congratulations to you, Warren, for your humorous short.

Congratulations on your story being chosen for the anthology! Who's the cute little (and hungry) model?

E.B., Thanks. You know how hard it is to combine humor and murder

Shari, I don't know. I downloaded the photo, legally, from a website

Ah, a free book giveaway! As someone who can't begin to afford to buy all the books I'd like, and then can't manage to read the ones I do have in a timely fashion, I can't resist an opportunity to possibly add to the "stack."

And I love short stories.

Thanks for the post--it serves as a reminder to not only enjoy what we read, but to take a minute to uncover why it works for us.

The Killer Wore Cranberry, Room for Thirds -- What a fantastic title! You can just tell the stories inside will be entertaining, and I'm intrigued by your "story behind the story."

It sounds like a fun read, Warren, and congratulations for being chosen for it. However, I don't have an e-reader so I probably won't have an opportunity to read your story.

Congratulations on your story being chosen, Warren! The anthology sounds like fun and I look forward to reading it.

Warren,
I actually own all three books so I'd prefer you give the free copy to one of the other commentators; however, I want you to know how much I appreciate the point you made in this post. I've been struggling with two stories -- both have good base ideas, but aren't working to my satisfaction, but thanks to your post, I think I see the missing element. Debra