The Effect of Sunk Costs on Writing 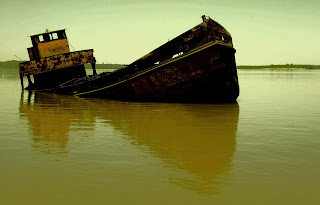 The Effect of Sunk Costs On Writing

I recently read an article about sunk costs in businesses.  The basic idea is that after putting money into an enterprise that cannot be recovered, it is harder to be unbiased in evaluating when it is time to cut your losses and walk away.  Part of the perceived value of a choice is the time and money already invested in it even when there is no way to recoup it. People uninvolved in the history of a choice do a better job of deciding when to walk away from a losing option than people who already have an investment of time and energy in that option.

In the realm of writing, the concept applies to a number of things such as making the decision to continue with or set aside a Work In Progress, staying with or leaving an agent or publisher.  I remember two venues where the publisher commented on how well I wrote submissions but did not accept them for publication.  After three attempts (3 strikes) I stopped making submissions to either of them.

(I would prefer to get a note that an editor hates my writing but will publish my story anyway.)
A mere three attempts with a novel would not be nearly enough to decide to stop sending it to agents or editors.  An author can expect to spend years and dozens if not hundreds of submissions trying to get a novel accepted by a major publisher or an agent. Of course authors now have other options.
Often when I write a short story with a particular venue in mind, the story is not accepted by that venue.  Then I submit it elsewhere.  Sometimes the criteria stated for a submission is unusual enough that I hang onto the story until I find another venue with similar criteria.  My favorite short story to read at book signing took the longest of all of my stories to get accepted and accumulated the largest number of rejections plus favorable comments I have ever had.

What sunk costs have you experienced?
Posted by Warren Bull at 12:00 AM

How about three years of sunken costs, Warren. At the beginning of this year, I started writing another WIP. But after talking with my husband, who said I would be wasting two years if I didn't see this book through, I went back to it. I have five beta readers. I've received three of their comments--it's now 2 against 1. But I have to revise it no matter what I do--major revisions. I'm going on with another script. In my spare time, I might try to fix this one, but at very least I need a break from it. Hidden costs? They are innumerable.

This fact leads to two issues, one of which you raised and the second you did not.

The key point you raised was how do you evaluate an unfinished project to determine whether or not to sink more time (or money or whatever) into it? As you say, it is often difficult for those heavily invested in a project to make good decisions about whether or not to kill it.

That means we need to accumulate a group of trusted advisors who can provide us with good, independent, feedback.

The second issue is that each day becomes a sunk cost in life. Therefore, each and every day I should try to find things I enjoy doing. That way I enjoy the process even if I have to walk away from an unfinished project.


E.B. I have been there, believe me. However, every successful writer I know has at least one unpublished
and unpublishable novel at home. I believe writing, getting feedback and revising are part of improving skills that writers need whether the current WIP ends up published or not. Time spent on these activities is not wasted.

Thanks for your observations, Jim.

Warren, I worked for over four years on EVERY LAST SECRET, then had it rejected by one publishing house (where editors liked it) as "uncommercial." But it was worth hanging in there since it won a national competition, was published by a major house, got all kinds of great reviews, was a finalist for the International Latino Book Award, and started my continuing series.

Great article. Warren's comments should reassure any writer with an unpublished manuscript in the drawer. The writing, even for stories never published, plays an important role in developing your skills.

Since most of my writing is for my own satisfaction, and sometimes it looks to me like it might be publishable so I move in that direction with it, it had never even entered my head that maybe some of my writing should be "abandoned." You give me a new perspective on it!

I only have one middle-grade story that I've abandoned, but not so much because I don't think it would be a decent book if I did finish it, but mostly because my writing took me in other ways.

Writing is something I enjoy doing so I don't regret the expense of conferences, printer cartridges, papers or anything else and never thought of writing as a loss of money even before I had short stories published or went indie with my books. It's certainly a lot cheaper an activity than many others like golfing, sailing or being involved in the horse business or many other activities.

I also recognize the law of diminishing returns, so when I've sent a mss to as many people as I think might be interested, I set it aside. I don't spend as much time on marketing as I do on writing. Now, with eBooks, I'm thinking of pulling out my old mss and considering publishing them myself.

I don't want to ever be one of those writers who spends ten years writing the same book, hoping to "get it right" this time.