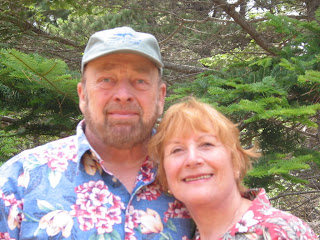 Today on Salad Bowl Saturdays we have a two for one sale brought to you by the writing team of Bette and JJ Lamb. They not only write together they live together. Join us today to see how that works.

Two heads are better than one, even if one is a goat’s head, says an old proverb.
But first, a warning: collaborating and cohabitating is not the easiest way to write a crime novel.
Ideally, you need two people with close to the same level of writing experience, similar approaches to telling a story, and the temperaments to spend long periods in the same room exchanging ideas … without killing each other.
We had none of that going in … except for the no mayhem part. In addition, our temperaments are worlds apart. It was a matter of meshing a career writer – journalism, short stories, and PI series – with an artist-RN.
The collaboration started after the RN/artist/sculptor kept bugging the writer to write a novel based on her “great idea.” After months of I-don’t-want-to responses, the writer brought the artist a ream of paper and a portable typewriter and said, “If the idea’s so great, you write it.”
The feisty ex-Bronxite said, “Okay, I will.” And she did. (Ah, but she found the portable “too slow,” and electric “too noisy,” and then experience with the small amount of memory in a Selectric quickly turned us into a two-computer family.)
The actual collaboration started with short stories, and soon moved on to novels.
First bump: the collaboration thing was a new experience for the writer, who’d always flown solo for both fiction and non-fiction. And there were discouraging warnings from others that trying to write and sleep together could destroy any marital relationship.
We tried a number of approaches – writing alternate chapters, adopting certain characters, specializing in certain types of situations, and various combinations of these. What works best? One of us writes a first draft, with continuous input on plot development and characterizations from the other. Then we swap places for the second draft … and so it goes.
For the final version, we sit down side by side at the keyboard and go through the entire manuscript, sentence by sentence, paragraph by paragraph. And, yes, it does get very noisy at times.
The amazing thing, at least to us, is that the final draft takes on a third voice that combines (we hope) the best of each of us. That best also takes in the fact that the nurse/artist/sculptor has, from the beginning, been the most imaginative killer of the two through four medical thrillers and a suspense-adventure tale.
When we finished the first book, Bone Dry, we agreed, and were adamant, that we had no interest creating a series. So the next two books, Heir Today … and Sisters in Silence, were standalones.
But we missed Gina Mazzio, our nurse hero from that the first book … and so did our readers.
Never say never.
Gina’s nemeses in Bone Dry was a despicable couple who were stealing treated autologous bone marrow of near-death cancer patients and holding it for ransom.
In Sin & Bones, Gina became curious about nurses disappearing from her hospital without a word, or any other clue. Before you could push a call button, she was caught up in the deadly dangerous illicit trade in human body parts. 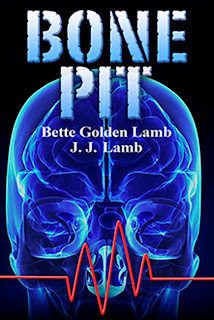 In the most recent book, Bone Pit, Gina takes a much-needed break from hospital nursing and goes off on a travel nurse assignment with fiancé Harry, also an RN.
Instead of an anticipated semi-vacation in the wilds of northern Nevada’s gold country, they discover their employer is deep into a murderous scheme to manipulate clinical test results for an experimental drug scheduled for FDA approval as a cure for Alzheimer’s.
The book is a tumultuous ride through medicine, mines, madness, and murder.


The fourth book in the Gina Mazzio RN medical thriller series that we were never, ever going to write, no matter what, is tentatively entitled, Bone Deep.

Jan, my sweety who some WWK readers have met, does not want to be a writer, but enjoys being my first, second and last reader. We do have battles over commas – we mostly agree on how many; it’s the placement that’s under dispute.

How do you handle grammar disagreements?

And why were you never going to write BONE DEEP, but now are?

I've often thought it would be fun to collaborate with another writer. But I also know there have to be conflicts, in plot, characterization and tone. Getting the story into a single vision is hard enough with one mind working. How do you achieve that single vision with two minds worrying the story?

I've heard that hanging wallpaper together was the ultimate test of a relationship, but I think writing together has to be right up there. Fascinating to hear how you two work it out. Sounds like a terrific series.

My hubby and his brother are always throwing ideas at me. Eventually, I know they're going to want to write the story with me. I'm sure if that ever happens there will be far more car chases and explosions in a book with my name on it:)

My sister and I started writing the first book together, but that didn't last. Our voices were so different. Also, we didn't live very close together, so I continued writing it alone. There are a few minor things of hers I left in it, but very little. I know some people can do it well, but it must be hard.

Hey, thanks for all the comments. We appreciate them,
B&JJ

Jim: Grammar disagreements are settled by the Chicago Manual of Style, the AP Stylebook, and sometimes pure stubborness.

E.B.: As we noted, we do the plot together, keep the characterizations in line as we go along, and literally hammer out the final version side by side at one keyboard.

Shari: We've also done our share of hanging wallpaper together over the years!

Sarah: Have to set the ground rules before you start. Sometimes you have to say, do your own story .. if I need an explosion or car chase, I'll call you.

Gloria: We have a local writer who co-authors with her sister via email, twitter, telephone, and whatever other communications system is available to them. But then, maybe their visions are closer together to start with?

Again, thanks until next time.

I admire your ability to live together and write excellent books together -- and all the while you keep smiling and don't stab each other (at least, not in front of witnesses. Keep up the great work, you two!

Peggy: We never show the bruises or stab wounds (physical or mental) to anyone!
And a big thanks for caring.
B&JJ

Peggy: We never show our bruises or stab wounds (physical or mental) to any one.
And we do appreciate your caring.
B&JJ