The Book Only I Could Write

Today at Salad Bowl Saturdays we welcome Terry Shames, who is sharing the joy in the publication of her debut novel, which comes out on Tuesday. Today, as her title indicates, she is talking with us about writing the book that ONLY you could write.

Today isn’t the best day for me to be serious because at approximately 6 PM last night, a box of books arrived at my doorstep. A box from my publishers. A box of MY books. My debut novel. 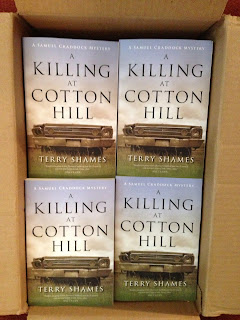 Luckily I was going out to an author’s event, so instead of spending the evening alone gazing at the books with a daffy smile on my face, I took along a copy to the event. All the authors there were appropriately giddy on my behalf because they all know that your first time is special. There were lots of toasts to my books and me. I had a great time. And then we got down to the business of the evening, which was a talk by three highly-esteemed authors—Daryl Wood Gerber (aka Avery Ames), Juliet Blackwell, and Kate Carlisle.

As I listened to them, I realized that each of them had written books that they felt uniquely qualified to write. Daryl/Avery has been a lifelong cook, and when the opportunity arose to write cooking-themed mysteries, she jumped at the chance. Julie talked about how her career in anthropology led her to a fascination with the realities of witchcraft—which translated into her popular, delightful (and well-researched) witchcraft series. Kate Carlisle writes a series centered around bookbinding. How esoteric can you get? But she said she had loved physically creating books with the art of bookbinding since she was a child.

At a recent meeting of my writers’ group, one of the men remarked that A KILLING AT COTTON HILL was a book only I could have written. Really? It’s from a man’s viewpoint, and I’m a woman—and it’s in first-person. I think what he meant was that Samuel Craddock’s experiences in the small town in Texas where he has lived most of his life are experiences that I observed through my own, unique perspective. Part of the perspective came from my adoration for my grandfather. Something of a hellion when he was a youngster, by the time I knew him, he had mellowed. Having lived an economically precarious life, he felt compassion for the downtrodden. Having worked hard, he valued hard work. And having felt the sting of unfair practice, he valued fairness.

Listening to him talk about those values and seeing him live them gave me a strong sense of what they meant. When I sat down to write about a man in a small town in Texas as the hero of a mystery novel, I channeled those qualities into my character. Strangely, I never thought of it that way until I had written two Samuel Craddock novels. And then I realized that what my writing buddy said was true:  this was a book only I could write.

I wonder if other writers have the sense that they are writing something they are uniquely qualified to write. Dennis Lehane sets his books in the gritty Boston neighborhoods where he grew up; his name conjures Boston. Nancy Pickard puts you clearly in a small town in the Midwest. Think of Laurie R. King and Sherlock Holmes pops to mind. My friend Susan Shea writes with absolute assurance about the world of a professional who raises funds on behalf of a museum—because it’s a world she knows well. Who can see the name John D. MacDonald and not think of a boat in Florida? 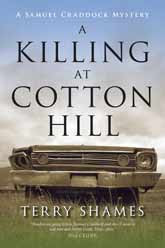 Raised in the wild state of Texas, at age six, Terry Shames began a life of crime, stealing money from her grandmother to buy a notebook—beautiful blank pages where she could write a story. A terrible liar, when her mother grilled her, she confessed and the notebook was confiscated. Although her criminal career was short-lived, her life of crime writing was launched.

Her debut novel, A Killing at Cotton Hill Seventh Street Books/Prometheus, will be available July 16, 2013. It is the first of a series set in the fictional town of Jarrett Creek, Texas, featuring ex-Chief of Police Samuel Craddock.

Terry is on the board of Norcal Sisters in Crime and is a member of MWA and ITW. She writes a blog 2nd and 4th Wednesday of the month on www.Theladykillers.typepad.com. Read more about Terry on her website, www.Terryshames.com where you can also find purchase links for A Killing at Cotton Hill.
Posted by Jim Jackson at 12:00 AM

Congratuations on your first published book! I know it's a thrill.

I think most of us write what we know & are comfortable with (even though we still have to do tons of research!)

When I write about the laborers in a steel fabrication plant or fiberglass manufacturing facility, for instance, I can close my eyes, picture the machinery, hear my co-workers talk and feel the weight of the hard hat on my head and the steel-toed boots on my feet. I like to think that comes through in my writing.

Congratulations I think we all write unique books because we have unique life experiences. My novels are set in the middle 1800s. I'm old but not that old. Even writers whose works have that timeline don't write like I do. I don't write like them. I follow my interests and create my explanations of events where we will never know exactly what happened.

KM and Warren, I think what you are saying is that we write about the characters and life experiences that we know--the rest of it we can get from research!

And we write what interests us, what we feel passion for. If a writer sets out to ride the latest trend, writing what he or she thinks will sell, the result almost always falls flat and lacks soul. Readers can tell who simply mails it in and who has poured everything ino a work. The more pouring, the better the book. In that way, authors who are true to themselves write the books that only they could write. And if you have a strong password on your computer, you can feel confident that no one else will write your book!

Congratulations, Terry, on your book and your strong password!

I co-author the Gina Mazzio RN medical thriller series with J. J. Lamb. I've been an RN for most of my life and have watched people experience every human emotion from bliss to utter despair. Writing these medical thrillers allows me to tap into a wellspring of experience. It also provides an opportunity to show others what a privilege it is to help people in need.

Congratulations on your debut novel. What fun!

People who know me and read my books (both fiction and nonfiction) say that it's like sitting across the table from me -- so I have to figure only I could have written them!

Congratulations, Terry. It's a great feeling, isn't it. Good luck on having it sell very well. I'll be looking for it when it comes out.

I write about a small fictional town in NE Ohio where I've lived all my life. I also have a gardening theme to my Catherine Jewell Mystery series because it's a passion of mine. You are right that writers who include some of their life experiences into their books - like your grandfather - write a better and more believable book.

Thank you for all the congratulations. And I really enjoy reading the comments. I'm very interested in what makes people choose a particular subject for their books. I have many interest, and yet when I chose to write about this small town in Texas, it took off.

Been along for the ride on this one and couldn't be happier that it's here, it' out there, and now, on to the next one. Congratulations, Terry.
J.J. Lamb

Right, JJ. On to the next one.

Best wishes for your book, Terry! Not to brag but I was probably the only person who could write my book about a mystery at a Beatles fan convention. How many mystery writers have been to a con? My second book is set at a movie studio, based on my experiences working at one. Write what you know!