How To Identify A Beach Bum

I’ve looked for pictures of beach bums on the Internet. There aren’t any. The picture on the left is typical of Internet beach pictures—from a Victoria’s Secret catalogue. Is she a beach bum? No! The hair, clothing, skin and pose are all wrong.


Because there is such a dearth (1) of beach bum pictures, I will attempt to define the species by taking a pragmatic approach using myself as an example. After fifty years of beach bumming (2), I proclaim myself an expert. I know the intricacies well, and I have successfully mastered the art. Let’s begin by donning figurative binoculars to identify a true beach bum.


·       Slickened skin and a particular odor--Putting on sunscreen before brushing teeth is a
common practice since beach bums never know when they will go to the beach. Like the
most practiced Girl Scout, they are ever prepared. If an opportunity presents itself before
breakfast, the beach bum will forgo the Cheerios to watch the sunrise over the ocean (on
any east coast).


·         Lack of hair styling—Blowing hair dry occurs naturally at the beach. Not only is there no need to style hair, but it would be a futile act. The salty humidity penetrates sleekly coiffured hair turning it into a jumbled thick mess.


1. The Pony Tail—Prevailing winds, especially on the Outer Banks are such that female beach bums with hair long enough to band do so. (See: jumbled thick mess)


·         Lumpy, rumpled clothing (or the 12 hour bathing suit)—After applying sunscreen, the beach bum puts on a bathing suit even if no time has been set to go to the beach. (See: ever prepared) This causes varied issues, good and bad.


1. No underwear (3)—Beach bums distain underwear preferring to wear a bathing suit from sunrise to sunset. They have no problems whatsoever with the practice.


2. General disheveled appearance—Due to wearing bathing suits under clothing, their appearance, depending on the suit, may have unusual lumps and bumps. Although beach bums understand that clothing must be worn in certain establishments off the beach, their preference for no underwear and beach creed necessitate throwing on clothing over bathing suits. (See: ever prepared)


3. Limited wardrobe—Because most of their time is spent on the beach, beach bums’ clothing is worn only a few hours per day so they rewear (4) the same clothing over the course of several days. Beach bums do not iron while at the beach.

4. Fishy smell—While not all beach bums fish, many do. They seem not to notice the odor of fish on their clothing or skin.


·         Skin colors—In the winter, you may have difficulty identifying a beach bum due to the color of their skin. However, if you were to examine a naked beach bum, his/her bathing suit lines would still be evident. This phenomenon increases with the age of the beach bum. In the summer, beach bums have raccoon eyes due to wearing sunglasses perpetually. Many are two toned because they favor laying or sitting on one side more than the other, such as readers who get more sun on the front of their bodies so that their backs are lighter, although tanned overall.


·         Lack of make-up/nail polish—All beach bums wear sunscreen. Few wear make-up. Make-up doesn’t apply well over sunscreen, and this, too, is a futile practice. Most beach bums like to swim in the ocean, which will take most make-up off. Lip balms containing sunscreens may be used. Nail polish is of little value to beach bums because of the exfoliating action of sand, which wears or chips polish away. Nails are polished, but sand polishes the natural nail.


·         Vehicles stuffed with beach paraphernalia—Chairs, coolers, boogie boards, surf boards, towels, beach bags, umbrellas, toys, etc., (See: jumbled, thick mess) can be found in the backseat, trunk or hatchback of the beach bums’ vehicle at all times. (See: ever prepared) For maintenance, the items may be rinsed of salt and sand, but then they are restored to their proper place in the beach bums’ vehicle.


·         Beach pictures—Beach bums’ computer desktop and home are littered by pictures of the beach, such as the one below from my laptop. 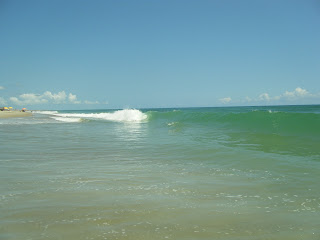 
(1) Although I’ve spelled this word correctly, the word should be spelled “dirth.” Beach bums are nothing if not practical people who use expedient language, such as “cowabunga” while surfing or boarding to explain their feelings. No matter how historic, any word that rhymes with “worth” or “Perth” should not have “ea” in its spelling.


(2) Beach bum is a noun, but it can also be an action verb—to bum, she/he bums, they are bumming. However, the verb is never subjectively passive as in “being bummed”—that is an entirely different, non-beach oriented verb.

That's right, E.B. Just rub it in for those of us in the landlocked Midwest!

I hope you're writing about beach bums. That would make a great background for a mystery series!

Glad you're having such a good time!

I've always lived within three hours of the ocean, Linda, and I feel sorry for those of you who can't get to the beach within a few hours. If I lived where you do, I'd feel cut off and claustrophobic! Being able to see the ocean makes me feel free. Its expanse of water and sky without people allows me to relax. My husband and I have been known to go to the beach at 6 a.m. and stay until 6 p.m.

Yes, my mystery is set on Bodie and Hatteras Islands in the Outer Banks. My MC, Abby, swims in the ocean daily, but when her abusive father reappears as a demon from a hole in the sand where she trapped him and he drowned, she stays out of the water. Running into a shark would be a more welcome sight to Abby!

Love it, E.B. Like Linda and Warren, I'm far from an ocean, but when I visit my California daughter, we always go to the ocean. It's the same when I visit my Tacoma, WA, sister.

However, almost all my vacations are spent camping in forests and mountains, and always with some form of water; lakes, rivers, streams and waterfalls. I like visiting the ocean, but I feel more at peace in the forests near a babbling brook or stream.

As for beach bum clothes - it sounds a lot like my gardening clothes minus the swim suit. I am totally scurvy at home and wear the same clothes for days except when I leave home.

They were out when my kids were young, Warren. If you were a beach bum, you'd move!

Yes, Gloria. Anytime the activity takes precedence over clothes, it's a good sign. Like writing in your pjs!

OMG, I need to go put on sunscreen! I was born in Santa Cruz and can never get enough beach time! Thanks E.B

My first introduction to the ocean was the Jersey Shore around Seabright during summer. Too crowded for my taste and I spurned it for the mountains. It wasn't until I again lived in Jersey a decade later that I discovered Island Beach State Park.

I could get up in the dark, throw my bicycle on the back of the car and get to the park shortly before daylight. I'd leave the car several miles into the park, well away from concession stands at the north end. I'd find a parking areas with only a few spaces, meaning there would be lots of space between the roasting bodies.

I'd ride the bike back to town, have a leisurely breakfast, ride back to the car and then hit the beach. After six or seven hours, I'd head back home, thereby missing the traffic jams in both directions.

Obviously, I wasn't a beach bum by the standards you set forth, but I did enjoy my time. Now, I get to the beach during the winter -- an entirely different, but equally enjoyable experience.

Thanks for dropping by, Michele--I'm still mad at you for leaving me high and dry though!

I surprised myself at how much I like the beach during winter. It's much better when the temperatures are above 50. The best shells are found during the winter. I walk down the beach in a winter coat while my husband patiently waits while I shell. He's getting into shelling too now.