When Pigs Fly and Dogs Surf

I love a parade! It’s energizing--filled with up-tempo music, color and pageantry. The most impressive one, in my opinion, is the Tournament of Roses Parade in Pasadena, California. With its magnificent floats covered in plant material and flowers (most floats have more flowers on them than an average florist uses in five years) it truly is the granddaddy of ‘em all.

This year’s hopeful theme was Just Imagine. I interpreted

it as the creative spirit triumphing over negativity and obstacles. I think these imaginative floats succeeded in bringing “impossible” ideas to life. Who would believe a float could be built for six surfing dogs including, Tillman, the superstar surfing/snowboarding bulldog?

But it was. The “Surf’s Up” float was the longest and heaviest float ever entered in the Rose Parade. It contained 6,600 gallons of water and used a wave machine to generate a wave a minute for dogs to hang ten on. At one point, as this float started to make a sharp right turn from one major road to another, announcers enthusiastically speculated it might not make it. But of course it did. (To watch video of the surfing dogs go to: http://www.youtube.com/watch?v=0JLva0y3ppg ) 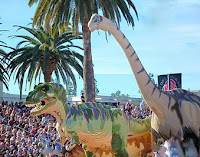 Another favorite, especially among the elementary school set, was the prehistoric dinosaur float. The head of the green dinosaur was ingeniously decorated using Brussels sprouts. Kids take note: Apparently there are other, better uses for this vile tasting vegetable.

While I wasn’t present at this year’s Rose Parade and had to watch it on television, I’ve attended three times in the past. The first time I was seated comfortably in the grandstand. The next two times I was squashed together with humanity on the cold, hard sidewalk. However, the floats seemed more impressive looking up at them from my position on the sidewalk. They loomed overhead creating gigantic shadows on the ground making me feel very small. 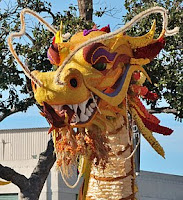 Yet, when I viewed the floats close-up at the post parade display area, it was easy to see that they were impressive not only because of their large size, but because of the meticulous attention to detail. Each rose had its own vial filled with water to keep it fresh and volunteers had painstakingly attached tiny seeds and flowers to create beautiful floral mosaics.

only succeed because of the planning and hard work that goes into making vision a reality. I imagine designers and engineers created many plans then added, subtracted and made changes until each float was exactly right. Sometimes success is due to quick thinking and prior planning--as in the case of the malfunctioning float that needed a tow.

I smiled when I saw a float with pigs flying planes. “When pigs fly” is a phrase implying that something is so impossible that it would never happen. But by believing in ourselves, hard work and pressing on through obstacles, our creative visions can triumph. Yes, in 2012 dogs surf and pigs do fly!

Photographs courtesy of Christopher Martin.
Posted by Kara Cerise at 12:05 AM

I've been down about my writing for a few weeks--perhaps because of the holiday break when I couldn't write--but I think I have performance anxiety. Is it good enough? We anyone like it? What do my critique partners really think?

Your message helps. Thanks, Kara.

Since I'm an avid gardener, the idea of watching a flower parade makes my mouth water. I'm so happy the plants are well-cared for. Do they donate the plants afterwards to hospitals, etc?

More and more with writing, I find details matter so much.

People do amazing things on those floats. That's my wife's favorite parade.

I'm also encouraged when I see creative ideas come to life despite the odds, E.B. It gives me hope to follow my dreams however impossible they seem.

I think all we can do is believe in ourselves, press on and be true to our own message.

Pauline, I've read that they donate some of the flowers to hospitals and other organizations. Although, I think a lot of the flowers can't be donated because they have been glued on the floats or have wilted under the hot sun.

The parade is even more amazing in person, Warren. Volunteering to decorate a float is near the top of my bucket list.