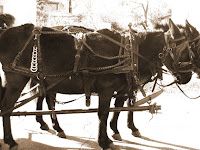 Earlier this month, while lying on the couch recovering from a clutter clearing accident (darn New Year’s resolutions), I watched a Christmas movie that I had recorded in late November. It was a TV mini-series set in the old west. I was transported to a simpler time where skies were blue and free of smog; horses ruled the road and people looked well-groomed and impeccably dressed despite harsh conditions.

In one scene, an old codger named Nicholas, played by actor Ernest Borgnine, drove a buckboard wagon to transport a badly injured sheriff home. The story question at that moment was: would Nicholas be able to get the sheriff home in time to be with his family for Christmas? It was a nail biter so you can imagine I was completely engrossed.

Yet, I became distracted when I noticed a dust cloud with a glint of silver rolling down a dirt road in the background. What the… I bolted upright from my prone position and grabbed for the remote, knocking over a bottle of ibuprofen in the process. Stop. Rewind. Play. Land sakes! That shiny object was a 21st century truck (or SUV) rocketing down the hill heading straight for the pioneers. Well, that took me out of the story.

by completely unnoticed. Since the scene featured an actor with the star power of Ernest Borgnine, I imagine the movie crew would have been very careful. Plus, they are usually watchful for intrusions on the set and if they miss something, professional editors catch it in post-production. One explanation is that the editors noticed and decided it would be too much money to digitally erase the truck. Or, maybe it slipped by unnoticed because everyone was SO focused on the characters’ actions and dialogue in the foreground that they didn’t pay attention to the background.

I wondered…am I concentrating solely on my characters’ actions to the exclusion of the background details, too? Did the murder in my story take place on the third floor of a two story house? Was the body buried in a flat prairie one day and in a mountainous terrain the next? Did the middle-aged murderer really grow 6” taller by the end of the book? Yikes.

I think continuity mistakes are inevitable in a first draft since a story evolves as it is written even if one uses a detailed outline. After completion, every major and minor change requires the writer to check for consistency throughout the book. The only way I know to do this is to keep track of tedious details, be vigilant during editing and get critiques.

How do you catch discrepancies that suddenly materialize and threaten to barrel through your story?
Posted by Kara Cerise at 12:05 AM

You bring up a good point, Cara. I always hope my critique partners catch those glitches, but in the end it depends on me. I hope I'm able to catch most of them, or better yet all of them. Your post makes me want to go back one more time to my completed ms.

Gloria, I felt the same way after spotting the glitch in this movie. Just one more pass through my WIP, then another...

I'm trying to find the best way to keep track of the details. I've used spreadsheets, OneNote and plan to experiment with Mind Mapping but I don't think there is a sure fire method to prevent these types of mistakes.

A few days ago I noticed that a pistol in a short story I'm working on fired one round more than the clip held. A critique group and an editor missed that, although they definitely caught other errors. I always need to edit the edits.

I have to watch out for making mistakes on revision. Because I'm so "into" the story, I forget that my character doesn't know something at the beginning, which isn't a mistake and because of the timing is appropriate. Over editing can create glitches where there were none.

During the first draft I try to make notes of times, places, and what characters look like. By about the second or third revision, I'm worried about who knew what when. Do the plot points follow in a cause and effect way? And so on. I understand why a writer might still want to make revisions even after the book is published.

That's a good point, Warren. Even though we may have critique groups and editors who catch errors, we are responsible for editing the edits.

Another good point, E.B. Over editing is way to create mistakes. I've gone around and around with revisions only to find that it was correct in the original version.

Pauline, I also understand why an author would still want to make revisions after a book is published!