Newspaper Article Headings: AKA Where have all the copy editors gone? by Warren Bull

Newspaper Article Headings: AKA Where have all the copy editors gone?
by Warren Bull 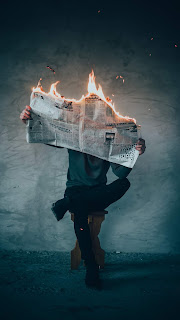 Image by Elijah O’Donnell on Upsplash

These are funny. Good point about copy editors!! Seven foot doctors was my fave.

Man struck by lightning was my favorite.

Thank you for giving me a morning chuckle! I love them all!


Warren, so funny. I'm still smiling over this. I enjoyed all of them.

I think that shooting juvenile defendants just might constitute cruel and unusual punishment, and I don't see how it will cut down on gun violence.

Hilarious! Thanks for my laugh for the day.