Last week a five-minute blast of very high straight winds hit our property in Michigan’s Upper Peninsula. In the hundred feet between our house and cabin and the lake, we lost all or parts of eight large trees: three hemlocks, two spruces, one cedar, and two maples. I haven’t explored the south end of my near-shore property, so there could be more. I have traveled most of the paths that wander through the remainder of my eighty acres looking for damage and found nothing major.

Why the disparity in damage levels, and does this have any larger significance beyond me having serious chainsaw work ahead of me?

When I bought the land in 1997, the trees at the lake’s edge were generally towering white pines and sprawling white cedars. The next tier of forest consisted of black spruce (60%), white pines and white spruce (10%), and deciduous trees (mostly red maple, white birch, quaking aspen – 30%). Beyond that 100-foot line, the deciduous trees became dominant with evergreens accounting for at most a quarter of the trees.

The black spruce were already starting to die from blight. A diseased tree would first exhibit the problem in the fall when many of the needles at the treetop turned yellow. By the next fall, the tree would be dead, and within three years the top would blow off, leaving a twenty-five-foot stub, which generally fell in the following decade. After twenty years of this infestation, perhaps five percent of black spruce near the lake remain.


The spruce deaths have opened the understory for new growth, and a mass of balsam, pine, and hemlock have reached up to fifteen feet tall. During this period, a few of the white pines, which were already past their prime and on their decline, have also died, losing their needles and dropping branches as the years pass. A third source of destruction occurred when beaver “harvested” up to a third of the large deciduous trees in that first hundred feet, including almost all of those at or very close to the water.

One advantage of all this woods-thinning is that we have a much better view of the lake from our house than when we first built it. The bad news is that when we consider the density of trees taller than twenty-five feet in that first one-hundred feet, there is no forest. Those trees have become a collection of individuals.

Those of you without significant forest experience may not realize that trees in a forest grow differently compared to the same tree in a suburban yard. Because of the lack of competition in the yard, trees grow out, expanding their canopy using long limbs that require thick trunks. The quest for canopy space in a forest requires rapid vertical growth. Light reaching the floor of a forest signals affected trees to grow tall as quickly as they can so they can grab that small spot in the canopy. Lower limbs are quickly abandoned. Strengthening the trunk takes a back seat to reaching height quickly. This results in tall, thin trees whose trunks are often brittle.

Twenty years ago, high winds that whipped across the lake were met by a dense collection of trees. Pines formed the core of the defensive front. Tall and supple and strong, and backed up by the large numbers of spruce behind them, they forced much of the wind to deflect up and over the forest. Now the big trees are isolated, with large gaps between. High winds are no longer deflected up; they retain their strength, sweeping past the pines, and pounding individual trees with their full force.

The unbroken wind uses the densely packed needles to apply extra leverage to individual trees, causing those cedar and spruce trees with shallow or weakened root systems to tip over. Trees with stronger root systems, like maples, birches, and hemlocks, remain standing, but the unchecked winds apply immense force to their leafed out or needled upper portions. If the trunk has a weaker spot, the winds can rip the tops of those trees off their bases. This is what happened to the hemlocks and maples. 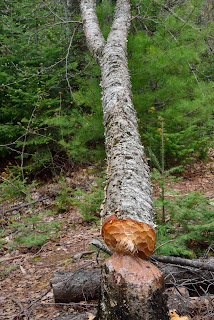 Collectively, the forest—before it was weakened by disease, old age, and beaver—could withstand almost any straight winds with only minor damage to the tall trees. Individually, trees are hard-pressed to sustain the periodic battering we receive in the U.P.

The birch and maple trees initially benefited when the black spruce died and dropped to the forest floor. There was more light for them. Their roots had less competition. When the beaver wreaked its devastation, it didn’t chew down the evergreens, leaving the towering hemlocks to stand alone. When a huge pine died, all the other trees grew faster using the extra light.

The tall trees that remain now claim a disproportionate share of the natural resources. Their leaves or needles gather most of the light. Their extensive root systems, hidden under the ground, absorb most of the water and nutrients.

The tall trees are now this forest’s billionaires. The black spruce were the forest’s middle class: hollowed by a disease that benefited those at the top of the food chain that claimed much of the canopy and feasted on the nutrients released to the soil. The understory trees are the forest’s working poor, struggling to get by on the scraps left by the big trees, but flourishing where they do receive enough light.

Those billionaire trees are living on borrowed time. When the winds come, the eviscerated middle class can no longer support them, and one by one they will be toppled.
Posted by Jim Jackson at 12:00 AM

Your analogy is apt and your description of the changing woods very interesting. I'm fascinated that the beavers don't take down conifers, but only hardwoods.

In Atlanta, the back of our yard was pine woods a hundred feet deep, with an understory of dogwoods and wild persimmon trees. In the aftermath of an ice storm, I watched single pine trees all over the neighborhood snap in two, their telephone pole-sized tops crashing on the ground. The pines in our woods survived, packed in next to each other. They also survived two category one hurricanes.

When we left, the pines were succumbing to pine beetles. Without their protection, the understory trees would weaken and die.

This is an interesting analogy. I'll let readers draw their own conclusions.

Certainly a fascinating way to look at it.

We only have seven acres, but we lose trees in heavy winds (so does the Girl Scout camp behind us.) The main culprit is very shallow soil--the bedrock is not far below the surface, so tree roots tend to be shallow, and a when the tree becomes too heavy for its root system to sustain, it blows over, usually pulling the roots out of the ground.

This entire area was clear-cut for charcoal in the not-too-distant past, and that interrupted the natural cycle.

I cringe when I see the old photographs of the big old trees that were cut & transported. Sometimes an entire logging crew is standing proudly on a stump. Did they have no appreciation for the hundreds of years it took for that tree to grow so they could take it down and devastate the area in a matter of days?

What a beautiful piece of property you have, Jim. I could spend hours and hours walking there and enjoying it. Even the tall spruce around my house that have died have not come down yet even in heavy storms. I lost two years ago and had a tree service take them down. I need to get a tree service out again to take them down because it's only a matter of time. In my woods there isn't a year that goes by that I don't come across fallen trees. My woods has all deciduous trees, mostly oaks, yellow poplars, maples and iron wood.

Wonderful analogy, Jim. The change to the understory in a few short years is shocking.

We do selective cutting on our property in Maine, as I suspect you do on your property. A certain amount is necessary to keep the forest healthy and we are lucky to have friends with years spent "in the woods" to advise us.

Mother nature's actions, on the other hand...we've used more than one tornado path to create new roads into the back of our property and been surprised by what mother nature allowed to grow up in place of the mature trees she brought down. In one case, a small grove of hazelnut trees!

Thanks to everyone for their comments. Each woods has its unique story to tell.