A Sort of Summer Storm 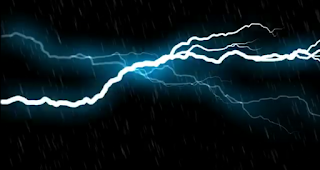 It was a dark and not-yet-stormy night, but the radar map and the Weather Channel both agreed—the storm was coming. I could see it flickering at the southeastern horizon, cloud to cloud lightning, a mild incandescent light show.

I knew I needed to put the chickens up before it hit. They’d already gone to roost, but I still had to latch the doors and close the nest boxes behind them, and I didn’t want to do it in the rain. I opened the back door, urged the dog to get his business done too, but he didn’t want to go out. This was not unusual—our dog hates nature in all its forms—so I shoved him out bodily and left the door open for him to come back inside.

And the door slammed itself shut behind him.

I hadn’t touched it. The wind must be getting up, I thought, and opened it again. There was no wind, however. The trees were still and silent, not even a rustle of breeze. I stepped onto the deck just as the dog shot back into the house.

The door slammed shut behind him, yet again.

I headed for the chicken house in my bare feet. I started off walking, but then I realized how deep the silence was, as if the air had thickened. As if there were no animals, no night birds, no insects. Just this dull cottony silence broken only by the sound of my footsteps.

I started running. My imagination shifted into overdrive, and I had the sensation that I was about to be sucked into the air, like Dorothy in The Wizard of Oz. So I ran faster. I hastily locked up the chickens—silent too, hunched inside their roost—then galloped back inside and shut the door behind me, breathing hard.

And then the wind rippled to life, and the first rain pattered down, and the heavy air dissipated.

My family has a complicated relationship with wild weather. We thrill to thunder and lightning, crowding onto our porches to watch storms coming, retreating inside only when the rain becomes horizontal and the sizzling bolts too close for comfort. My mother, however, has lost two homes to tornadoes, and she tells me that the feeling I had was probably one passing overhead. Or if not a tornado exactly, a pressure system of some sort, the eye of a meteorological black hole, dense and sucking and dangerous.

She is probably right. It is a reasonable explanation. But I am Southern born and bred, with ancestors hailing from the coasts of England and Ireland. We know that some nights are darker than others, that some winds don’t come from the compass directions. We remember the old tales of the Wild Hunt, and the Fey, and the Banshee. We understand that sometimes it is best not to think too hard about doors that slam themselves shut.

It is a bright morning as I write this. The breeze is still cool-ish, not yet warmed by the baking sun. The birds fight the squirrels over the sunflower seeds I have put out, and the chickens make crooning noises as they scratch and peck.

But there’s another summer storm coming tonight. And I plan on being safely inside when it does. With a candle lit against the darkness. Just in case.


*     *     *
Tina Whittle writes the Tai Randolph mysteries for Poisoned Pen Press. The fifth book in this Atlanta-based series—Reckoning and Ruin—was released last year. Tina is a proud member of Sisters in Crime and serves as both a chapter officer and national board member. Visit her website to follow her on social media, sign up for her newsletter, or read additional scenes and short stories: www.tinawhittle.com.

I like how you and your family enjoyed watching the approaching storms. When my children were small, I would act excited about the thunder and lightening so they wouldn't be afraid when they occurred. It worked, and we spent many an evening on our screened porch watching Nature's show. Lightening and thunder don't scare me--but a howling wind will send me to bed with the covers over my head.

That eerie pre-storm stillness does evoke something deeper than the purely meteorological but still I like watching a good storm. Too bad that means I have to be in one, too.
When we were driving cross country years ago I had the shift through eastern South Dakota, before the badlands, where the land is flat and the sky is endless. A sudden, complete darkness swooped down on us and pounding rain then - nothing but that feeling of being sucked upward. Very unsettling, for sure! Then the sun came back and we carried on, but for those few seconds - whew!

Once during a violent thunderstorm, we had a tornado pass over our house in northeast Ohio. I remember that the sky turned green, then pitch black before we heard a train-like roar. I was pregnant with my second child, the first a toddler. I wanted my daughter not to be afraid (we should have taken shelter in the basement, but we didn't have a storm alert system or a NOAA weather radio), so we reached outside the patio door for some tennis ball-sized hailstones to show her daddy, and then watched the storm strip two monster weeping willow trees of their branches.

We lived on high ground. The twister touched down in the center of town, and mowed down every tree on one side of the main street.

When we moved to Atlanta, we purchased a NOAA radio which tracked violent storms by the quarter mile in our area. And we did retreat to the basement.

These stories give me the chills. I too love the spectacle of wild weather. But in my nightmares, the monster coming for me is never of the criminal or undead sort -- it is always a tornado. There's nothing like the touch of a bad storm to make me realize how insignificant we are in the face of that kind of power.

Probably because my mother was never afraid of storms, I never have been, either. When there's a possible tornado coming at least one of my daughters call me telling me to get to the basement. I never pay attention because I have a horrible basement. I'd prefer to go into my
bathroom which is in the middle of the downstairs. The only thing that bothers me about thunder and lightning storms is that one of the trees around my house may come down or the electric may go out and I'll have to read by flashlight. My California daughter envies me when I get a thunder and lightning storm because it's very rare where she lives in California. She was thrilled when we got one when she was home caring for me after I left the hospital.

I have chickens, too, Tina, as well as a dog, who sometimes refuses to go out although not always.

I have seen the results of a tornado but I've never seen one. I remember the green sky during a tornado alert so it had to be close. And I enjoy thunderstorms, which sound like God's fireworks.

The chickens don't seem to care about bad weather. The dog, however...

I remember when I was younger, every time a storm would roll in, I would start to gather my things because I knew my grandmother would be coming to school to get me and take me to home, where we had a basement. I slept in that basement sooo many times. It felt very safe, which is why I probably enjoy storms now -- I had a secure vantage point.

When we lived in Michigan, we had a few near-misses with tornados. One came across the street from our house, right down the railroad tracks (didn't tear them up) knocking down trees and electric power poles. The first time my younger daughter went away with a group, a Brownie trip to a nature preserve in Kalamazoo, a tornado touched down in Kalamazoo and did a fair amount of damage. I was listening intently to the radio, and when I heard that there was damage to stores and office buildings, I figured it couldn't be near them, since very few nature preserves have stores and office buildings.

I usually worked the midnight to eight shift in a steel fabrication plant, but sometimes I got kicked back to four to midnight. When tornado watches were called, they'd send someone up to the roof of the factory to keep an eye out for tornados. A few times we had to gather in a safer area, usually the ladies room, which had very sturdy walls and was in the center of the building. Although there were never more than two women on the shift, and usually just one (me), it was huge. During WWII, when women were operating most of the machinery, they expanded the ladies room to forty stalls. I could use a different one every day for almost two months.

They are like fierce beats unleashed, tornadoes. And just as fickle in their destruction. I will probably always live where they roam, though, so I'd best make my peace with them. Also, you showed much more presence of mind than I would have if my daughter were out with one roaming around.