It was a big week for readers in my little neck of the New England woods. We had appearances by two literary luminaries: Chris Bohjalian and Margaret Atwood. I couldn’t wait to see these authors I admire so much and my expectations were met, exceeded, and upended.

In his sleek suit, Bohjalian looked businesslike and every bit the best-selling author. I noticed a few notes stuffed into his copy of his latest book The Guest Room. This made me expect a structured, businesslike presentation: Introduction, Biography from birth to latest bestseller, and so on.

But the first thing Bohjalian did when he strode to the podium was laugh and express his astonishment that 65 people had come out to see him on the same night as Game Seven of the MLB championships.

Instead of a by-the-numbers presentation, Bohjalian wove a story, a story about a boy who had to wear orthodontic headgear for four hours a day and found refuge in the Miami Library, where he encountered books by Stephen King, Peter Straub, and Peter Benchley. He wove together his life as a reader, son of Armenian descent, father, and advocate for victims of trafficking. He told us that his daughter is the one who helped him understand himself as a writer. “Dad,” she said, “your sweet spot is seriously messed up young women.” He said that the effect he tries to create in his writing is one of dread, and he likes to walk that fine line between heartbreak and hope.

And just when he couldn’t be any more likeable, Bohjalian told us he had just seen Margaret Atwood in the lobby of his hotel, and, he confessed, he was too star struck to introduce himself. 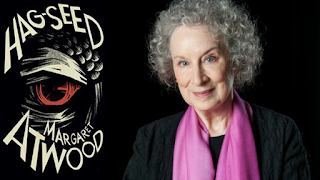 The next day I took my seat in a packed room of students, professors, and other readers to see Atwood, the Canadian author of the modern classic The Handmaid’s Tale, The Blind Assassin (winner of the 2009 Booker Prize), Oryx and Crake, The Robber Bride, and the just released Hag-Seed, a modern spin on Shakespeare’s The Tempest.

My expectation was a serious, soul stirring presentation by a serious genius. After all, the symposium is dedicated to the Creative Arts and Moral Vision. But Atwood wears her genius lightly.

She laughed at her own jokes, evidently never met a pun she didn’t like, and the first thing she talked about was her new graphic novel  (“Graphic novel is what you call a comic book” she said, “in hard cover”) about a part human, part cat, part bird and his battle against an evil half rat, half human. I’m not making this up. Angel Catbird is goofy, weird, and great. Part of the reason Atwood did this mash up was to bring attention to the loss of birds due to poison and pollution, habitat loss, and glass windows.

She then read an excerpt from Hag-Seed, which she set in a modern prison. The excerpt was gleefully profane and Atwood followed it up with a hysterical rap written by the inmates of said prison. Margaret Atwood rapping! That I never expected.

Have you attended any author presentations? Were your expectations met, exceeded, or upended?
Posted by Shari Randall at 12:00 AM

It is always such a pleasure getting to meet the authors of books that I've enjoyed or heard so much about. I remember meeting Edward Marston at the first Malice I attended and couldn't believe my good fortune. And at the same conference when Katherine Neville told me that she was writing a sequel to "The Eight," one of my favorite books, I felt like I had been entrusted with special information. To top that, hearing Diana Gabaldon, author of the Outland series, speak at a local bookstore was astounding. Who needs appearances by movie stars and politicians when you have favorite authors coming through town.

I have been to many author presentations: at conferences, bookstore events, and book festivals. I enjoy those where I learn a bit of the author, a bit of what went behind their books, and ultimately a bit about me.

The ones that are all me, Me, ME! or sell, Sell, SELL! leave me wondering why I wasted the time.

Cara Black spoke for over an hour at an Alliance Francaise event in New Orleans. The setting was intimate and quiet as she spoke in detail about her childhood in San Francisco and how she came to write her Aimee Leduc mysteries.

Let's hear it for Connecticut College! Shari, was Atwood's event open to the public?

Hi Grace, I'm with you! My favorite stars are writing stars!

Hi Jim, totally agree. These two writers are well-established, polished pros and there wasn't any buy-buy-buy at all. Part of the reason I went was to observe different approaches to author talks, and I was not disappointed.

Hi Margeret, Go Camels! Atwood did one seminar for students only and the talk I went to in the evening was open to the public (and jammed).
How I love the Aimee LeDuc books. What a treat for you to see her in an intimate setting.

What a stellar weekend! I'm still trying to wrap my brain around Margaret Attwood rapping. Thanks for sharing!

I've been to several presentations by Nancy Pickard who is a gracious and friendly speaker. I always come away with new ideas.

Shari, what a great two events you went to.

A month or two ago I went to hear a writer at a library about thirty miles away where one of my Sinc chapters is a librarian. She wanted as many of us as could make it to come. The author was Linda Castillo, who writes a series with a protagonist who was once Amish and is now the small town's chief of police. I found her talk fascinating, and her protagonist even more so since she lives in a mixed community of Amish and English. Since I live near the Amish and find their way of life interesting, I bought the first two copies of her books, and plan on getting more of them.

Like Warren, I also have heard Nancy Pickard speak as well as Hank Phillippi Ryan at our local Sinc chapter events, and found them quite interesting and with Hank, funny, too. And, of course, I've enjoyed the panels at Malice Domestic who have authors I like, and authors who interested me enough for me to buy their books.

What a fantastic weekend! I'm feeling a little envy here!