Okay, I don’t live in Alaska, Minnesota, the Dakotas, Wyoming, Wisconsin, Idaho, Montana, Upper Michigan, or any of the states further north, including upper New York State and the northern New England States, but  even here in N.E. Ohio it’s been darn cold this past week or so. Last week all the schools in the area were closed for three days, except for a few on a two hour delay.  When I delivered Mobile Meals last Thursday in temperatures down around 5 degrees in a car taking a long time to heat up, it took me longer than usual  because the side roads, although plowed, still had enough of a layer of snow that I wasn’t going to speed through my almost forty mile route.  When I did finish, it was so nice to get back to my comfortably warm house.

In the town where I pick up the meals to deliver, The Warren Family Mission, a Christian organization started by Rev. Chris Gilger, has three facilities now open not only to feed people, but to house those who need a warm place, especially in the brutally cold weather. Those in need are given a place to shower, a cot with blankets, clean clothes, a laundry to wash what they have and are served three meals a day. Currently they have beds for 175 people, and one doesn’t have to stay there to get a meal, either. They feed anybody who comes.

And then there are the animals. Animal rescue facilities take in as many neglected  cats and dogs as they can, and most people with farm animals; horses, cows, sheep, chickens, etc. see that their animals have food, water and shelter. Many people also feed the birds. I have five feeders up plus a suet feeder.

Other animals have three choices: Migration, adaptation, or hibernation.

Some birds and a few insects like some butterflies and moths migrate south.  Even some of the birds at my feeder in the winter have migrated down from Canada like the juncos.  Some bats, caribou, elk and whales travel in search of food each winter. Many fish migrate as well. Most of the insects that migrate move further down into the soil some as deep as six feet below the surface. Of course, all the cold-blooded animals like reptiles and amphibians go dormant.

Animals that remain and stay active in the winter must adapt to the changing weather. Animals grow thicker fur in the fall. Weasels and snowshoe rabbits change their fur to white to help them hide in the winter. Some animals like squirrels, mice, and beavers gather extra food in the fall and store it to eat later, but rabbits and deer spend the winter looking for moss, twigs, bark and leaves to eat. To stay warm, animals like squirrels and mice often huddle close together.

And then there is hibernation. The biggest problem for most animals in the winter is finding enough food. If an animal’s main source of food is scarce in the winter like insects or green plants, it may solve this problem by hibernating. This deep sleep allows them to conserve energy and survive the winter with little or no food.

Most hibernators prepare by either storing extra food in their burrows or dens to eat when they awake for short periods, or it is stored as body fat to be used later for energy. Hibernators have two kinds of fat: regular white fat and a special brown fat (brown adipose tissue). The brown fat forms patches near the animal’s brain, heart and lungs. Its main purpose is to provide extra body heat, and also to send a quick burst of energy to warm these organs first when it’s time to wake up. 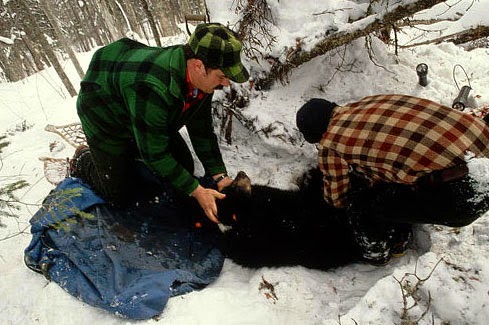 True hibernators go into such a deep sleep that they are difficult to wake and may appear dead. Their body temperature drops and breathing and heart beats slow down significantly. True hibernators include ground hogs, bears and some bats. Some hibernating animals like skunks, raccoons, and some chipmunks may wake to roam and eat if the weather turns milder. 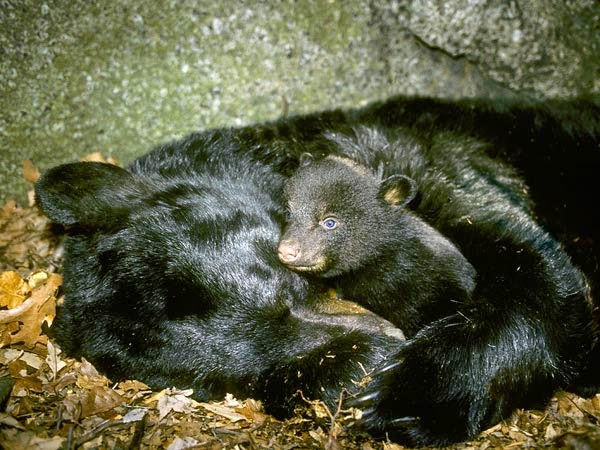 The largest hibernators are the bears. Their temperature doesn’t drop quite as low as other hibernators allowing them to wake quickly. They are unusual in that they do not eat, drink, or excrete at all while hibernating which can be as long as six months. Female polar bears even hibernate during their gestation period.

So how do human animals get through the winter? Many from the north, especially if they’re retired, migrate south. Others adapt by dressing warmly, making sure their furnace is working and the windows are draft free, etc. They shovel their walks and make sure their cars are winterized.  Full hibernation is not an option; however many spend more time in the comfort of their homes reading, sleeping and maybe eating a little more to put on a few extra pounds.  My method of getting through the winter is a combination of adaptation and a little bit of hibernation.

How do you get through the winter months?

Jan believes that “Seasonal Affect Disorder,” which involves sleeping more in the winter is not a disorder at all, but mammalian adaptation and she is proud of it, refusing to get up before the sun rises. It just gives me more time to write in quiet since I’m usually up well before six regardless of daylight.

Like Jim, winter is my time to write. No one wants to come see me so I don't have to entertain guests. Other members of my household have their pursuits (thank goodness!) so they are occupied with school and work. I used to hate winter. Now, it's my creative time.

Jim, I wondered why you were always the first to leave a comment and figured that you were an early riser. I'm more with Jan on this. In fact, even though the clock radio went on at 7:00 as usual, I promptly went back to sleep until close to 8:30. Late for me, but I hate getting up on these cold mornings.

E.B. I write more in the winter, too, mostly because there's no gardening to do and only the ponies and chickens to even go outside for. Unless it's warm enough to walk, I rush through those chores.

I picked up heavy barn coat on deep discount last spring at a tack shop. How people wearing this coat are supposed to do chores is beyond me because it's thick and heavy. Moving around in it is work in itself, but I manage.

I'm still riding. The barn has an indoor. It's not heated, so my instructor bundles up. I usually take off layers because I work up a sweat just saddling.

This has been a rough winter what with illnesses, so the barn is a respite for me. I'm lucky to have that haven.

Rhonda, I miss those days of saddling up a horse and riding. Except when I took my kids for riding lessons and for a brief time when I took them, too, I never rode inside. I was lucky enough to have nice trails near my home.

Although I don't have a heavy barn coat, my winter coat is large and rather awkward, but on these cold days it's quite comfie. It's my hands that get the coldest.

After the major winter holidays, I start announcing that I am ready for spring. It doesn't help. I like to travel during the winter. I like comfort food. There are some gorgeous sunny days. If I could hibernate, I would.

I turn on the fireplace(it's gas), and Lakota and I hunker down to write. If we aren't writing, we're reading. I go out only if I need something or to go to the gym. I pick my grandchildren up, too. Lakota is allowed out only long enough to do her business.

I find it a constant source of amazement that there is an entire country (Canada) north of the US, and much of it is very cold in winter. Not to mention the short days! I think the total lack of sunlight north of the Arctic circle would do me in.

Some friends from Scandinavian countries translate a saying from their homelands as, "It's never too cold--you just have inadequate clothing." They say that babies are often bundled up and put outside for naps. In the past, when one heated with wood or coal, the respite from the smoke inside was healthier.

Warren, I'd rather stay home warm and bundled up because I have more time to read and write then. I like my comfort food in the winter, too, which with the lack of walking most days when it's too cold, doesn't help keep the pounds off.

Jane, it sounds like a perfect place to be. My Maggie doesn't mind being out for awhile because of her coat, but when I'm heading back in, she's the first one at the door waiting for me to get there and let her in.


KM, I think I use to suffer from SAD after Christmas, but somehow after I got busy doing things I enjoyed - teaching and then writing, etc. I haven't been bothered by it for a long time. I do find that on days when the sun is out, no matter how cold it is, I feel much happier and more energetic.

My son, however, suffers SAD from the winter weather. But then he leaves early for work when it's still dark and doesn't get back until it's almost dark. Also, often he's working out in the cold or in unheated buildings.