An Interview with Krista Davis


‘I don’t have to see her. I can’t get her out of my head.
Maybe that’s the reality of ghosts. Maybe they live in our heads.’ 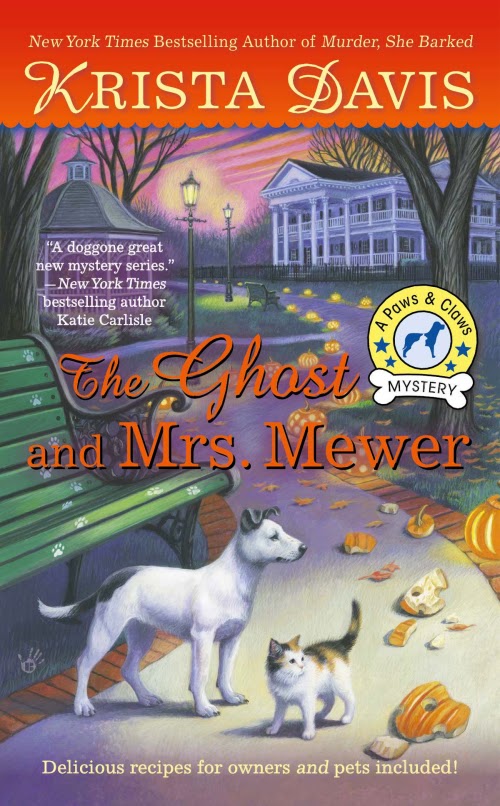 In The Ghost and Mrs. Mewer, Krista Davis’s second Paws and Claws mystery, main character, Holly Miller, makes the permanent move to the Sugar Maple Inn in Wagtail, VA. Set during the Howloween season, Wagtail comes alive, or dead, as the case maybe, with ghosts and murder. Holly greets the ghost-finding Apparition Apprehenders, the cast of a reality TV show, and their pets to the inn while keeping her skepticism hidden. But after a woman’s supposedly accidental death threatens to close down Howloween, Holly investigates. Trixie, her dog, and Twinkletoes, her cat, dig up clues to murder. Holly may not believe in ghosts, but she does hunt the haunted to determine whodunit.
E. B. Davis


You’ve created a situation in which main character, Holly Miller, becomes her grandmother’s partner in Wagtail’s Sugar Maple Inn, a bed and breakfast for owners and their pets. What conflicts will Holly have with her grandmother, Oma (German for grandmother) as Holly calls her?


Oma and Holly already have a few conflicts. In The Ghost and Mrs. Mewer they take opposite sides on whether Mallory’s death was an accident. Oma is a strong woman and quite opinionated. Holly is just like her, so I expect them to clash sometimes! But in the end, they love each other deeply, so minor disagreements won’t matter to their relationship.


Do you have a German background, an Oma in your life?


My mother’s family is from Germany. My own dear Oma has passed on. She was an avid reader so I like to imagine that she eagerly awaits my books.


Victim Mallory Gooley stirs emotions. Even though she’s had a tragic life, people have good reason not to like Mallory. Why such a complex victim, and what unforgivable sin does she commit against a writer?


Poor Mallory had such a tragic past. I kept wondering what I would have done in her position. I think it helps us understand her behavior. She was desperate to obtain something that she lost and pinned her hopes on one person. The more she saw that slipping away, the more desperate she became.


The unforgiveable sin, of course, was taking credit for a book someone else wrote!


Oma’s Golden Retriever, Gingersnap, fills the role of canine ambassador, as you’ve deemed him, at the inn. What role will Trixie undertake at the inn?


Trixie is definitely a snoop. She has a nose for trouble and is always sniffing out murder. Gingersnap, as Golden lovers will recognize, would much rather stick around the inn kissing all the guests.


Eva Chevalier made an impression on me. As the academic and ghost buster, she’s in an impossible position as far as her role in the reality TV show. But on the suspect list, she in the same awful position. How can a ghost-busting academic also love supernatural fiction like the old TV show, The Ghost and Mrs. Muir, and does she own any Bakelite jewelry?


Eva owns a lot of Bakelite jewelry! Even though she doesn’t believe in ghosts, she loves fiction, and can suspend disbelief for a great story.

What are some of the breakfast treats that are served in the fall at the Sugar Maple Inn? 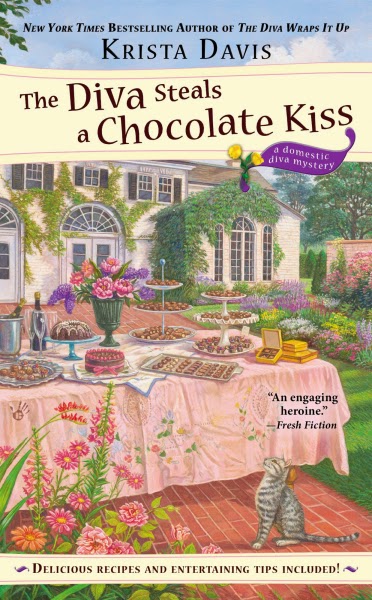 There are so many! Holly is having trouble reconciling herself to the decadent choices available to her now that she lives in the inn. One that she has trouble turning down is Pumpkin Pancakes with Chocolate Chips! A dog version is available without the chocolate. Not your thing? How about Sugar Maple Inn Caramel Banana Oatmeal or Asiago Cheese and Ham Omelet?


Although Holly suspects some of the ghostly images are fakes, much to her annoyance, the occurrences in her Aunt Birdie’s house remain unexplained. But Holly’s attitude toward her aunt is justified. Why is Birdie such a pill to Holly, and yet she can be entertaining and pleasant to others?


Birdie is jealous of Holly’s relationship with Oma. She wants to be closer to Holly but is clueless about how that might happen. She’s harder on Holly because she’s family (aren’t we always tougher on family than on other people?) and Birdie has certain expectations of Holly.


Do deer really shed their antlers every year? Even the five-pointers?


Apparently so. As testosterone increases during the summer, the material at the base of the antlers weakens. They rub their heads against trees and the antlers fall off. It’s not painful to them. It’s just a natural process.


I won’t spoil the ending for our readers, but I did love it. Do you believe in ghosts?


That’s a tough one. I really enjoyed researching ghost theories for this book. I come from a family that leans toward poo-pooing ghosts, yet after my father died, every single one of us saw or heard him. Even the most skeptical among us!


The trouble with ghosts is that it’s so difficult to scientifically prove what someone else is seeing or feeling. While there are plenty of explanations (some of which are mentioned in the book), many are difficult to comprehend or as improbable as ghosts themselves.


I am convinced that there are things we do not know or understand. Ghosts are a phenomenon found in all cultures around the world. I find that fascinating. Does it mean that ghosts are simply a human method for dealing with death (in which case one would expect them to differ greatly between cultures) or that they exist?


The next Diva mystery, The Diva Steals a Chocolate Kiss, will be released in June. Will you tell us about it?


Domestic Diva Sophie Winston is in charge of the sweetest event in Old Town this summer. Amore Chocolates is celebrating its fiftieth anniversary with a chocolate tasting at the mansion of the company’s CEO, Joe Merano—and Sophie is running the show. With cookies, candy, and five kinds of chocolate cake, it’s a chocolate lover’s dream! But when Joe goes missing, the celebration becomes bittersweet. And when Sophie discovers the body of a competing chocolatier in the guesthouse, the event turns downright deadly.
As if that wasn’t enough, Sophie’s been receiving daily boxes of sweet treats. After ruling out her new beau and her exes, Sophie wonders if someone’s trying to send her a message—and if she’s next on a chocoholic’s hit list…
Hope you had a great holiday, Krista. What treats did you bake your dogs for New Year’s Day?


Queenie, Buttercup, and Baron rang in the year with baked sweet potato chips and a salmon recipe that I’m trying out for the next Wagtail book. The dogs are eager taste-testers and are so happy that I’m writing a series that includes recipes for dogs.


The Ghost and Mrs. Mewer was released on December 2. It’s available at all book retail stores. If you read it now, you’ll have plenty of time to dream up a costume as cute as Trixie’s for your dog before next Howloween. 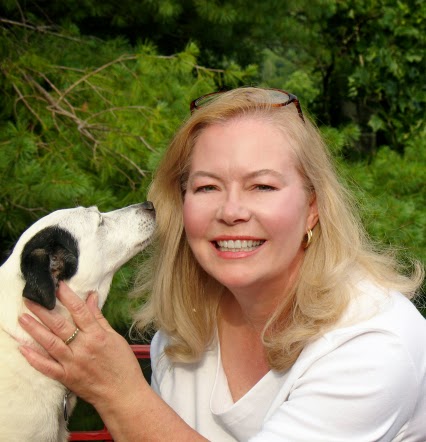 Nice interview, Krista and E.B. Jingle sends wags and woofs to you both and everyone in Wagtail.

Sounds like another winner, Krista. One of my favorite gigs as an author last year was sharing Malice Go-round with you.

Best for you, your critters and your books.

I must apologize to Krista. The other bloggers can attest that to get the double spacing out of the format, I had to run all the paragraphs together on the draft page. Blogger can exasperate me! Now, I wonder if other blogs I've posted have the same format issues.

Warren, the book was a fun read. I love when the pets come up with the clues, but in real life, they do because of their superior senses so that isn't Krista's invention. Of course, it takes a human brain to put all the clues together, which Krista's MC does well.

Thanks for the interview, Krista!


Krista, as a dog and cat lover, this sounds like a fun read. I'm looking forward to reading it. See you at Malice, I hope.

Thanks, everyone! I'm delighted to be here.

Hugs to Jingles, Barb, and to you, too! Hmm, doesn't he need a Ghost and Mrs. Mewer bandana?

Jim, we had fun at Malice-Go-Round last year. I think we made a great team!

Thanks, Warren! It was fun researching ghosts.

EB, no apologies necessary. Blogger makes me crazy, too. Sometimes it has a mind of its own. Thanks for coming up with such interesting questions!

KM, I hope you'll like it. I've received a few notes from people who liked that I tried to address both sides of the are-ghosts-real question.

And for those not familiar with the series, I'll answer the question I get most often - no, the animals don't speak.

Thanks so much for having me!

Hi Gloria! I hope you'll like the book. I have a Ghost and Mrs. Mewer bandana for your beautiful collie if she wants one!