“No matter how excited you are about something you see, act like you
don’t care. This is all about the fine art of negotiation.
Find your inner poker player.”
Sherry Harris
Tagged for Death (Page 6) 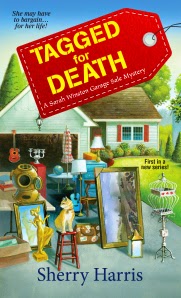 Sarah Winston’s happy life as an Air Force wife crashes around her when her husband, CJ, ends up in the arms of his subordinate, 19-year-old temptress Tiffany. Forced to move off base, Sarah’s self-prescribed therapy involves hitting all the garage and tag sales in and around her small town of Ellington, Massachusetts. If only she could turn her love for bargain hunting into a full-time career.

After returning from a particularly successful day searching for garage sale treasures, Sarah finds a grisly surprise in one of her bags: a freshly bloodied shirt that undoubtedly belongs to her ex, CJ, who now happens to be Ellington’s chief of police. If that’s not bad enough, it seems Tiffany has gone missing. Now it’s up to Sarah to prove that her cold-hearted ex is not a cold-blooded killer. But finding that treasure may be murder.
http://sherryharrisauthor.com/

When I was asked to join a critique group comprised of SinC Chesapeake Chapter members, I had no idea of the quality work I would read. Of course, now I know that one of the members, Sherry Harris, started out as a professional editor. It’s no wonder that her writing shines. Kensington will release Tagged for Death, the first of her Garage Sale mystery series, on December 2.

Thank you so much for having me on Writers Who Kill. Your questions are amazing and gave me a lot of think about.

Do you have experience in the military? Air Force?

My husband served for 21 years. The families of military end up serving every bit as much as the military person does.

Many of Sarah’s problems are due to her ex’s military career and her involvement as a military wife. How hard is it for military spouses and families?

Like with most things in life it depends on your attitude. I knew nothing about the military when Bob and I met. I didn’t know it was frowned upon for a lieutenant’s wife to ask the colonel’s wife to go out to lunch.

My husband and I met in Cheyenne, Wyoming. After our first year of marriage he asked if there were any bases I didn’t want to go to. I immediately said, Los Angeles Air Force Base so guess where we went – LA. You have to make the most of the experience; even if we were at a base we weren’t thrilled about we met the most wonderful people. Had we not moved around, I would have missed the friends I made.
Is there a “them vs. us” mentality on military bases? 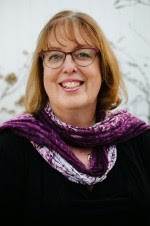 Not that I ever saw or felt. Bases and the towns that surround them have a symbiotic relationship. Bases provide lots of jobs, people on base spend a lot of their money in town. Kids often go to local schools (the school districts get extra money for the military kids) and they play on school and recreational sports teams. Communities fight to keep bases open when there’s a BRAC – Base Realignment and Closure. Lots of local businesses offer discounts to military and their families.

Sarah tries not to judge people because she feels her mother’s negative judgment over her divorce. Is there any cure for feeling parental judgment?

Very interesting question and interpretation of Sarah! Therapy? I don’t think anyone likes to be judged, and getting over parental judgment is probably a very individual process.

Deena Brown is a character everyone can hate. Did you base her on anyone you know?

No! Thank heavens I’ve had so many great people in my life.

Military families become close fast because we are all far away from our real families and need to support each other. We’ve had many a holiday with the wives and kids of the deployed sitting around our table.  I don’t think there’s a stigma. But divorcing a military person means you can’t live on base any longer so you have to move away from friends, you don’t have access to the commissary or health care. It would change your life in many, many ways. My husband always says that the military is a microcosm of society.

Ellington, MA is located about fifteen miles from Boston. Some of your scenes occur in real towns. Is Ellington real? How about the Air Force base? 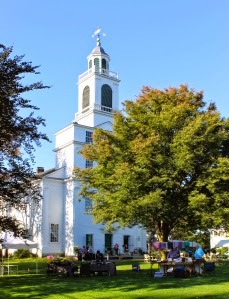 Ellington is a thinly disguised version of Bedford, MA and Fitch Air Force Base is a fictional version of Hanscom Air Force Base. We were stationed there and lived in the area for five years. I didn’t want to move there but fell in love with the area. Most of us who are stationed at Hanscom call it the Air Force’s best kept secret.

We all recycle paper, glass, cardboard, aluminum, and metal, but I’ve never heard of clothing recyclers. How do they recycle clothing?

I actually have no idea. I volunteered at the base thrift shop and often worked in the back room sorting stuff that came in. We put aside stained, worn, and ripped clothing to be taken to the Goodwill where they recycled it or got it to a clothing recycler.

Sarah’s ex is named CJ Hooker, which is apt. But another personality came out when you revealed that CJ’s other nickname is “Chuck,” a name Sarah hates. Do names conjure images and confer traits?

Absolutely, which is why it takes me a long time to name characters. When I was writing The Longest Yard Sale (the second in the series) I had one character named Place (for place holder) and another named Blank until right before I turned in the manuscript.

The only way Sarah can access the military base is by knowing about the security to bypass it. How realistic was your portrayal of base security?

Base protocols are always being updated to match threats. For example, when I lived on base if I wanted to bring a non-military guest on base I’d call the visitors center and give them the information about who was coming, where they would be, and how long they would be on base. Now you have to physically go to the visitors’ center with your request.  My sources wouldn’t answer a lot of my questions – rightfully so – so I made up what was in the realm of possibility. There are lots of patrols, cameras, and probably safety measures I haven’t even dreamed of that protect a base.

As much as Sarah was hurt by CJ, she still wants to help him. Why?

CJ lies to protect Sarah. So even though she’s angry with him, she has a mess of feelings that make her act.

After leaving CJ, Sarah has—what she considers—a night of shame. Why does she feel so guilty?

Sarah met CJ when she was eighteen and considered herself a one-man woman. Her actions shake the core of who she thinks she is. It makes her look at herself and think about her relationship with CJ.

What’s next for Sarah Winston?

In The Longest Yard Sale, Sarah turns Ellington into New England’s largest garage sale for a day. It’s the biggest event in Ellington since the Revolutionary War—hopefully without the bloodshed. Sarah is mad as heck when someone uses the town-wide garage sale to commit a crime and frame her good friend Carol.

Sherry, tell us about your adorable dog, Lily.

She is the sweetest thing. Lily thinks every person and dog who’s outside when we are is there to be her friend. She has a gentle soul with an independent streak. Lily isn’t a lap dog.

Are you a mountain gal or a beach babe? My dream house would overlook the water in Monterey, California or along the coast of Maine. 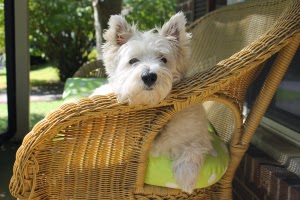 Good interview. And could Lily be any cuter?

There are so many intriguing elements to your series, Sherry, I can't wait to get my copy of Tagged for Death.
And Barb is right - Lily is so sweet!

Welcome to WWK, Sherry. I wish you and Tagged for Death wonderful success.

I enjoyed Tagged For Death and appreciated how Sherry brought the plot full-circle. (that's all I'll say about that--you'll have to read it!)

Sherry is having her release party at the Barnes & Noble at Fair Oaks Mall in Fairfax, VA on 1/11 at 9 a.m. Hope to see everyone there!

Lily is pretty darn, cute, Barb! As is Jingle -- it's their eyes that always get me. They say so much with them!

Thanks, Shari! I hope you enjoy it!

Thanks for having me, Jim!

Elaine, thank you for your thoughtful and thought provoking questions!

Welcome to WWK, Sherry. Tagged for Death sounds like a book I'd love to read. I wish you success and that you sell many, many books. Lily is adorable says a writer with a large collie equally adorable. Not that I'm prejudiced or anything. :-)

Thanks, Gloria! Collies are such wonderful dogs!

A great interview delving into the background of a great mystery! Having been an army wife for 6 years, I could relate to the situations in Sherry's book.

You juggle a complicated set of circumstances, with plots and subplots! And it sounds like you do it very well.

Love the picture of Lily.

Thanks, KM! Lily is a sweetie!

I enjoyed this interview very much and can't to read "Tagged for Death"!

It looks (from Facebook) like you had a wonderful launch. Wishing you and your book great success.

Sherry--I'm sorry I missed your launch! Knee-deep in business receipts and trying to finalize 2014, I looked at the clock at four p.m. and realized what I missed. I would much rather have gone to your launch. Since the weather was horrible, I hoped that everyone went to the mall to get out of the rain and to look for a good book--yours. Thanks so much for the interview!

Thanks, Jim! The launch was a lot of fun!

Elaine it was a great time and I'm sorry you missed it but taxes have to be done! You are such a great support to writers as are all the Writers Who Kill!

Editor is a great background for a writer. You see so many mistakes.

Sherry, you're back! Just let me say again how much I enjoyed your book. That last scene brought tears to my eyes - when does that happen with a cozy mystery?!

Paula, thanks so much! I hope you enjoy Tagged for Death!

Hi, Warren! The editorial background does help me see mistakes but I always manage to miss a few too!

Shari, thanks to all of you for having me back! Wow, that means a lot to me as much as you read and write Shari! Thank you!

Thanks, Sarah! I'm so happy to be here!