I do use real people and events in my books, but... 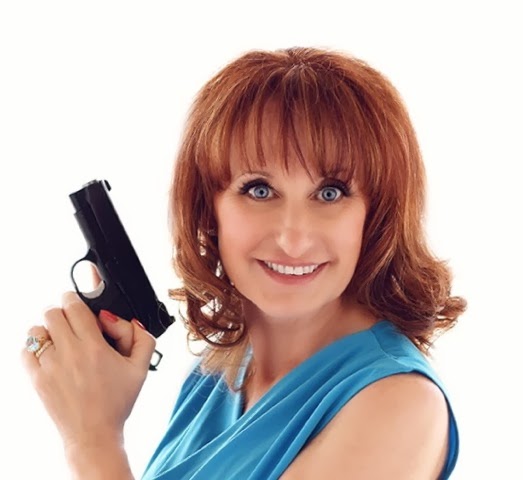 Salad Bowl Saturdays return for 2014 with author Kathy Bennett, a former LAPD officer. She answers a question most fiction writers also get, but given her job experience, her take provides interesting insight. Without further ado (but channeling Ed McMahon) ... here's Kathy.

I do use real people and events in my books, but not in the way that most people might think. Like building a patchwork quilt, I use bits and pieces of people, experiences and conversations to compose my stories. In fact, when I’m speaking at an event I tell people that no one is safe and what you say to me today could wind up in my next book. But it goes beyond that. If I like the outfit you’re wearing, one of my characters might make a similar fashion choice. After all, I was trained to be an observer…and eavesdropping is something I developed on the job as well.

I also gather ideas from the internet and the news. No one person or crime is ever represented. No one person would readily recognize themselves or their situation – and if they do, it's in their mind only. I take what I see and hear in real life and give it a twist.

But what about the crime and the crooks who caper? Do they come from my imagination or are they real cases and real suspects? Again, I’m like Doctor Frankenstein pulling actual suspect personality traits, speech patterns, or actions and mix and match them with criminal activity. But no one individual or crime is ever represented.

One of the elements of my first book, A Dozen Deadly Roses, was actually based on a stalking incident in my own life, although the situation of the stalking was totally different.

In my second book, A Deadly Blessing, I toyed with politics both inside and outside the police department. In that book, two very public incidents led to the plotline of the story, and yet, I think you might be hard-pressed to name those inciting events.

My most recent release, A Deadly Justice, is the most intricate patchwork I've created to date. The story involves multiple crimes with multiple suspects and multiple motivations for the characters to be doing what they do. While the book was a challenge to write, (and keep everyone and their crimes straight), I really liked how the story turned out.

One of the things I do struggle with as a writer is the well-known saying: The truth is stranger than fiction. That saying is so true. I've tried to incorporate into my writing some especially memorable encounters I had while working the streets of Los Angeles. They just don't translate well because the experience sounds too far-fetched to the average citizen. But my police officer readers would believe the stories because they've lived them.

Kathy Bennett is no stranger to murder and mayhem. She served twenty-nine years with the Los Angeles Police Department—eight as a civilian employee and twenty-one years as a sworn police officer. While most of her career was spent in a patrol car, she’s also been a Firearms Instructor at the LAPD Academy, a crime analyst in the “War Room,” a Field Training Officer, a Senior Lead Officer, and worked undercover in various assignments. Kathy was honored to be named Officer of the Year in 1997.

Kathy's debut novel, A Dozen Deadly Roses, and her second book, A Deadly Blessing became bestselling ebooks at Amazon and Barnes and Noble. A Deadly Blessing is the first book in a series featuring LAPD Detective Maddie Divine and was named a Best Book for 2012 by Barnes and Noble. Law enforcement personnel laud Kathy's authentic stories of crime and suspense for “getting it right.”

Kathy's third book, A Deadly Justice, was released November 2013. It's available on Amazon, Barnes & Noble, Kobo & iTunes. She's currently working on the next book in the Maddie Divine series.

Thanks for sharing a former police officer's take on characterization.

I suspect most writers are frankenvacuums: we suck in all the stuff around us and the proceed to produce some unique combination in our writing.

Thanks for joining us on WWK today. ~ Jim

Waving hi to Jim and to Kathy. Kathy, not only is a great writer, she's also a generous person who has helped us writers who can't know what she knows every chance she get. Kathy, one of the most charming stories I read about you was when you, after your police days, had to get out and direct traffic to save some animals. Am I remembering that correctly? I remember so well because you said you had to revert back to your cop voice. Tell us about "cop voice." How that's instilled in you and what you did that day if you recall! Great to see you on Writers Who Kill!

Kathy, Thanks for the interview and thanks to Jim too. I think you did a great job of explaining how writers use real people. After 30 years as a psychologist, I agree that life is much stranger than fiction.

Kathy, Thanks for the interview and thanks to Jim too. I think you did a great job of explaining how writers use real people. After 30 years as a psychologist, I agree that life is much stranger than fiction.

Kathy, welcome to Writers Who Kill. I think most writers mix up characters with different people they know, at least to some extent. And one only has to read the newspaper to agree with you that truth is stranger than fiction. Your books sound interesting. I'll have to order them to read.

Thanks for your insight. I think we all incorporate bits and pieces of things we've seen and experienced in our work, and I'm sure you've got a rich background to use!

Thank you for having me, Jim. I love the frankenvacuum line…and I think we all try to remember those snippets of conversation, or actions that catch our attention.

One thing that police officers have to be good at paying attention to multiple things going on at once. So, I might be talking to a suspect, but also be listening to my partner questioning another suspect. Not only did I need to know what the other suspect was saying, but I had to know that my trainee partner was asking his suspect the right questions!

Donnell! Thank you for your kind comments.

Ha ha! It was a bunch of ducklings. Their mother had been run over by a car and the poor baby ducks were running down a major street in our neighborhood.

I couldn't believe that other drivers weren't stopping for these ducklings. So…I took my personal vehicle and pulled it across traffic lanes. Then I got out of my car and ORDERED a woman not to move her vehicle (there was a duckling underneath). She looked a little startled, but complied.

My 'cop voice' was instilled in the police academy. If we didn't answer up loud and proud, we'd be punished…usually doing push-ups or taking laps around the running track. I hated either activity, so I developed my cop voice quickly!

Oh the stories I bet you could tell…of course, using the Frankenstein method.

Thank you for taking the time to chat today.

Yes, I think one of the ways that coming from a police background might differ from a non-law enforcement officer is that police officers often see people at their absolute worst or lowest point. I try to harness those experiences and emotions.

I haven't used it in a story yet, but one time I had to give a death notification to a woman whose only chile, a son, had been killed in a traffic collision. Internally, I was a wreck and yet had to present an image of strength to the woman. I gave her something/someone to hang onto on the worst evening of her life. I can only hope I brought her some comfort.

Thank you for visiting with me here on WWK.

You know, I'm sure everyone in their own way and experience has models they can use. I'm horrible with numbers, but I bet accountants have clients they could patchwork together to make an interesting character. Or, what about hotel staff, food servers?

I guess it's all in the observations :-)

Thank you for stopping by and visiting with me.