Dying is Easy by Cathy Sonnenberg

“Dying is easy; comedy is hard,” an actor quipped on his death bed. Whereas laughing in the face of death may be heroic, joking about murder gets a bad rap. At a conference, a best selling author spoke dismissively of ‘a light-hearted romp through murder’ being unworthy of a writer’s energy. Is humor truly a lesser genre?

My own foray into humorous mysteries began at the death of my husband. Grief consumes a lot of brain cells. Reading serious literature was beyond me. Romance, when there seemed no possibility of there ever being any in my own life again, was just plain depressing. I had enough misery that taking on someone else's, even fictional, was too much of a burden. Mysteries gave me an intellectual buzz (not all the brain cells were mush) and humorous mysteries added a smile to the puzzle. When I started writing, I naturally gravitated to light-hearted murder. 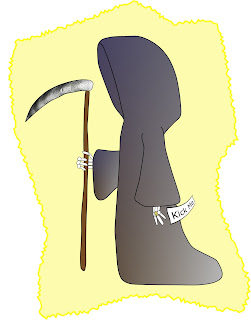 There’s no doubt, in real life, death – especially murder - is as traumatic as it comes. I can’t imagine joking in the face of bereavement or writing a humorous take on an actual murder. But let’s face it, death is as natural as life and unless we are immediately connected to the deceased, our own interests are always more compelling than a stranger’s death. And therein lies the humor. We are not mocking the dead, but the living. Case in point - The Mary Tyler Moore episode in which Mary can't contain her laughter at the funeral of Chuckles the Clown. The story reflects our anxiety that we, too, might laugh at an inappropriate time and place. We loved Mary for being human.

Laughter is healthy but comedy is hard to pin down. What’s funny to one person falls flat for another Just as you might hate Adam Sandler but love the Marx Brothers; you might find Janet Evanovich over the top but appreciate the drier humor of Christopher Fowler. Is finding a few humorists not to your taste reason enough to dismiss the entire sub-genre?

Comedy shows and movies have whole banks of writers. Stand up routines last a relatively short time and are performed over and over again. Writers of humorous mysteries work alone. They not only have to create the characters, plot, sub-plot and red herrings, they have to hit the comedic beat on a regular basis without a whole lot of help.

Rodney Dangerfield lamented, “I don’t get no respect.” Don’t writers of "light-hearted romps through murder" deserve to be taken more seriously?
Posted by E. B. Davis at 12:12 AM

I love humorous mysteries. Even if Janet Evanovich is maligned, I still laugh when I read her books. Kaye George's Choke is chocked full of humor as is Ann Charles's series and Nina Wright's dog series. That element alone will cause me to buy a book, because in all honesty,I buy for entertainment. I'd rather the mystery not be lame, but if it makes me laugh its mission will be accomplished!

Hi Cathy. I remember reading your WIP and laughing out loud. Sure I relish the shudder at thinking about evil hanging around outside my window but I'm grateful to all the authors who make me laugh. We all need to laugh more.

Writing humor well is writing well Acting is a good comparison. Comedies are rarely nominated for Oscars but comedic actor usually take on dramatic roles without a hitch. Dramatic actors often have a hard time with comedic roles. Pace and timing is key to comedy.
In serious work, a touch of comedy allows a change of pace.

I enjoy humor in books. I'm also envious of those who can write it. I'm definitely challenged on that front. As Elaine said, there are all kinds of humor, and it leaves most of us feeling better after we've read it. If you have the ability to write it (which is very difficult), don't let anyone talk you out of it!

Hi Cathy, I, too, read yoiur WIP and loved the wry humor and the twisty finale! I love humor...if I didn't laugh, I'd cry! Thanks for the blog.