A Writer On Vacation

Jan and I are on a three-week plus vacation. Much of the first part of the trip consists of traveling by train. Once we wend our way from St. Paul, Minnesota to Halifax, Nova Scotia, we’ll rent a car and go where we fancy. In between those two cities we spend time in Buffalo, Toronto and Montreal.

What does this have to do with writing?

Two things. It means I must shelve my normal routines. More importantly, it gives me 24 days to watch people. I give you these quick character studies. Feel free to steal them if you want.

In a train station: A short, shabby, slightly stooped woman shared the sleeper car waiting room with us. Jan and I talked with two volunteers who ride the rails and provide natural history commentary to folks in the club car. The woman hovered at the edge of those conversations but did not participate. Shortly before we boarded the train the woman handed Jan a piece of paper that said (and this is the essence, not an exact quote),

I normally don’t look this disrespectable. Something is wrong with my voice this morning and I can’t talk. Maybe it’s my boyfriend, the doctor.

If the train we are on has a dining car (in addition to a club car with junk food) we choose to eat in the dining car. The food is better and one or two other travelers join our table, which allows us (often) interesting conversation. During a breakfast the waiter ushered us to a table with a mother (70s) and son (aged 50). The mother had cared for her husband for several years before his death and now a year after his passing was taking this first trip accompanied by one of her eight children.

Her unpartnered son was a complainer. Nothing was quite as it should be. The train crew had been disrespectful to his mother; the dining car attendant was always in a hurry and wouldn’t take the time to answer questions; there was a piece of eggshell in his omelet—it needed to be returned to the kitchen; the rails were so rough through South Dakota that the train almost derailed while he was trying to sleep. We later overheard him making this same remark to another passenger…

I quickly understood why this guy didn’t have a life partner.

Should Jan or I manage to divert the conversation from the past atrocities committed upon them to their future plans for this trip, the answer would fairly quickly veer off into an anticipated problem, circle back to a recent one or veer off into a detailed recitation of some situation a fellow passenger had experienced on a previous trip.

We responded to one such reported incident with our truthful line that “we consider those kinds of things part of the adventure.”

You betcha. Now in my writing I tend to kill people or otherwise inflict bad things on them. Such a deserving victim, don’t you think?

In Toronto we ran smack dab into a three-day tattoo convention. I have never seen as much body art on display. We didn’t spend time touring the convention itself since the daily admission was $25 a day; otherwise we might have been tempted. From above we could see a sea of booths with examples of proffered tattoos. Some of the people the escalator delivered to the convention had no visible area left to tattoo. Studs were also displayed on many a part. Jan’s favorite was a guy who had a shaved head decorated with numerous studs. I can’t even imagine.

On Saturday we went to see the Toronto Blue Jays beat the San Francisco Giants. (That’s baseball for anyone who doesn’t know but does care.) I sat on the aisle. Next to Jan sat an officious young man in his twenties trying his hardest to impress the woman who had accompanied him. Perhaps she asked a question or two, but most of the commentary she and Jan were subjected to was simply the guy filling what would otherwise have been silence. I fantasized her slipping him a roofie so she could slip out of the stadium and get on with her life.

One really cool thing is the Toronto field has a retractable roof and we got to see it open. It runs on tracks and since we were in Mountie territory, I had a quick flash of Dudley Do-Right saving Nell from Snidely Whiplash after he had tied her to the rails.

Oh that’s right: I was going to allow you to make up your own stories with these characters.

In our hotel room we found a rubber ducky next to the tub. What stories can that duck tell? 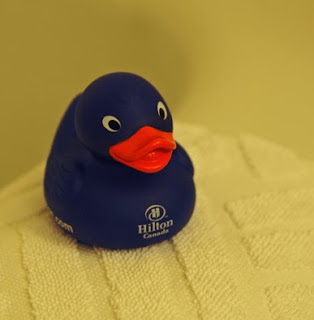 Nice material for the writer. I love watching people. I usually forget to have my notebook handy. But your post reminds me what rich texture, scenes like you describe can give to a novel. Off to stick a notebook in my purse.

Jack Kerley, an author friend of mine, introduced me to the pleasures of an inexpensive digital recorder. I found that after a bit the pocket notebook becomes ratty and the pencil point broken.

Used to be that if you talked to yourself walking down the street people steered clear. Now when I softly speak into my recorder, they think I'm on my cell phone.

I tend to be a magnet for people who love to tell their life story. When not on the job (I'm a former reporter) I'd let those conversations go in one ear and out the other. Now that I'm writing fiction, I'm thinking I should start carrying a notepad again, just for those odd conversational moments. Thanks for the food for thought--and for letting me be a virtual passenger on your trip.

Ha, I just came back from Toronto. My daughter went for the tattoo convention. She herself has a number of tattoos (one whole arm and lots of the rest of her skin) plus piercings and studs. She spent the weekend partying with other tattooed people, including many of the artists she knows from London who were there.

My brother went to that Blue Jays game. He was searched going in (the G20 is in TO all this week and throwing the whole city into chaos) I have family living there and they're all taking measures to avoid the whole thing, either leaving town entirely or taking the week off work so they don't have to deal with the tight security.

But my writing vacations? I take my laptop and in this weekend, started a new novel. But people watching is always fun, too.

Thanks Jim. That sounded like so much fun. Hopefully, when you get a chance you'll email me with more detail. How exciting to go by rail.

PA Brown said: Ha, I just came back from Toronto.

Which goes to show what a small world it is and what a large community of writers exist.

We didn't have any problems with the Toronto preparations for the G20, but we were walking everywhere.