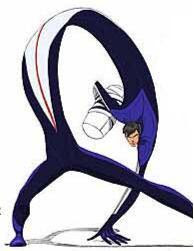 I woke up to the shock news on Tuesday morning that Flash Forward isn’t getting renewed for a second series. You guys (and I mean that as in everyone else in the civilised world) probably knew that weeks, if not months, ago but I’m a little behind on my entertainment news....mostly on purpose (eighteen year olds writing biographies? Surely you have to live a little before you can write the tale of your life?).

I don’t really watch that much TV, but Flash Forward was one of the very few things I Sky plus-ed (I think the American equivalent is Tivo, I think....I’ve no clue what the rest of the world does...maybe they simply watch things when they’re aired like you’re supposed to?). I thought the premise was pretty interesting. The whole destiny/fate thing. I was (and still am) three episodes from the series finale when I learned the dreadful news and now, I’m not sure I want to bother watching the last three. I like the series but I know the whole blackout thing isn’t going to be resolved so it’ll leave me on a huge cliff hanger, to which the resolution will never come. And who needs that kind of drama in their life?

But that’s the downside of having a huge story arc, where every episode is a step closer to the final plot resolution, with a cliff hanger huge enough to keep you waiting all year for première of the second series.

I used to love the stand alone episodes of ‘The X-Files’, though admittedly, they creeped me out something shocking. After all this time, there’s still one episode that has me checking and double checking (then triple checking) the locks on my doors and windows at night. I don’t even remember what it was about, other than a man (I think it was a man, not a creature) who could stretch himself. I can hear you all shouting ‘So what? Thingymejig from the Fantastic Four can do that too!’ and it’s true he can (but he’s a superhero so is automatically struck off the ‘Creepy’ list) but it doesn’t change that one episode from having left a lasting dent in my psyche.

The whole hunt for Mulder’s sister left me a little cold. And that’s the problem with long running series. The stand alone episodes work brilliantly for the first series to introduce the world to your characters (especially if they’re mixed in with a not-so-all-consuming long story arc). You could possibly get away with it for the second series too, but not the third. The audience has invested their time (and hopefully) their emotions in the characters, so if they don’t see any emotional development, they’re going to change the channel.

It works the same for books too but the neat thing about literature, is that you also have the long running series made up of standalone stories, with each instalment narrated by a different character. A lot of long running paranormal series work this way, keeping the long story arc going in the background while the specific stand alone plot takes care of the foreground.

My personal preference is reading a series (even if it’s a series of individual stories) to a standalone novel. I love reading series because once I get to know a character, I usually become a little attached. The flip side to that is when the series ends, I’m devastated. I know the characters aren’t dead (or even real people who can die) but there’s still a sense of sad finality to reading the last few lines and closing the book. It’s kinda like the world dies away. Finishing Robin Hobb’s Farseer Trilogy (of trilogies) nearly ripped my heart out.

That said, if the series main protagonist shows no emotional development after being kidnapped, shot, stabbed, blown up and kidnapped again ( because what self respecting hero/heroine has only been kidnapped once in their literary life?), by the fifth book, I’m thinking, s/he has to get smarter or tougher or I’m going to change the channel, so to speak.

There’s nothing worse than reading a character who never grows or learns from past experiences. For me, at least. I know reading is about escaping your own reality for a while but we’re smart people, we want to read about smart people who are affected by whatever it is that the author has put them through.

So, in closing.......what TV series can anyone recommend? Answers on a postcard....

Email ThisBlogThis!Share to TwitterShare to FacebookShare to Pinterest
Labels: Jordaina