I love short stories. Both reading them and writing them. So whenever I see a submission call for an 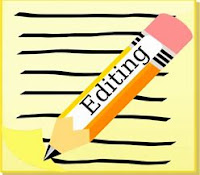 anthology, I seriously consider sending in a story.


Some of them are rejected of course, but some are accepted.


Before publication, I know the story must go through dreaded-but-necessary editing.


But I also know what my initial reaction is going to be. I will open the email attachment and all the comments and edits, in red, will leap out at me, apparently mocking my every effort.


How could this be? After all, I only send in my best work. It’s been through my own edits several times, gone over by at least one of my friends with whom I exchange manuscripts, and critiqued at one of my writing group breakfasts or by my on-line critique group. Often both.


It should have been publication ready! How could there be so many edits? If it was so bad, why was it accepted in the first place? Am I deceiving myself into thinking that I can write, and here is someone—a professional, no less—who has finally exposed my fraud?


I let it sit unread for a few days, reminding myself that I have never had an editing experience that didn’t improve a manuscript. Remember the short story set in the winter with snow where I managed to use the word “swirled” something like eleven times? Or the historical one where I completely bolixed up the value of money in the late 1800’s? Saved by an editor with a sharp eye!


Right now, I have two stories in different stages of editing.


One is a fun story about a woman who buys a robotic assistant to help her prepare for a party she is hosting. The editor and I are pretty much on the same page, and the editing process has been fun, too.


Then there’s the other one. It’s longer than most of my stories. The main character is my beloved Miss Grayling, an elderly maiden lady (is that term still valid?) who lives alone in the Victorian mansion where her family has resided for well over a century. By now, it’s shabby and outdated. Miss Grayling doesn’t see that, so although she has an adequate income, thank you, she does not keep up the property.


Miss Grayling wants things to remain exactly as they suit her, and she has a unique way of dealing with problems. She identifies the person causing the problem and eliminates them. 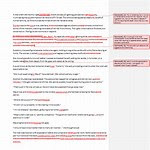 When I took a look at the edited manuscript, it was a sea of red.  Probably more red ink than black. Twenty-two edits in the first two pages alone. Plus suggestions for substantial additions to the plot.


My first inclination was to write back and say I wanted to withdraw the story. But saner thoughts prevailed, and I set it aside for a few days.


Took another look at it, actually read it with the edits and suggestions, and put it aside for a few more days.


Obviously this editor has spent considerable time and effort to make the story the best it can be. I know I should appreciate that.


And I have to admit all the comments and changes make sense.


She stops me from making a cringe-worthy factual error. I fell victim to thinking I knew something that I didn’t know and so I didn’t do the research I should have. Miss Grayling goes to an acquaintance’s home for tea. While I knew that most of the time, tea is served with milk, I also knew my elderly aunts would sometimes have a “cream tea” for their lady friends. What I didn’t know was that the “cream” referred to the clotted cream (or approximation of it---clotted cream is difficult to come by in the US) served with the scones, not cream in the tea.


I have to grudgingly concede that the suggested changes to the plot up the suspense ante considerably and now that I see them, I can’t understand why I didn’t write it that way in the first place. They don’t change the characterization at all. In fact, they enhance it.


To my secret delight, the editor suggested using semi-colons. I have always respected semi-colons, but have been told so often that they are seldom suitable in modern fiction, and I have made an effort to eliminate them. But they fit quite well into Miss Grayling’s world.


I’m still not to the point where I can go evaluate the suggested changes without wincing, but I will get there. And thanks to a skilled, dedicated editor, the story will be much improved.


Maybe I should revisit my other Miss Grayling stories with a critical eye. They could probably all benefit from careful, extensive editing.
What kind of experiences have you had with editors, and have they improved your work?
Posted by KM Rockwood at 12:00 AM

My anthology stories have had a few editor's tweaks, but nothing major. I know most of the edits are for anthology continuity.

A good editor can always find ways to improve a story. A good author learns how to put their ego aside and listen to the advice.

It's been awhile since I wrote a short story. I have had several short stories accepted for anthologies in the past, but not often.

Margaret--continuity is important for anthologies. Even when everybody tries to follow the same style guidelines, issues do crop up. And it's the editors' hard work that brings that continuity to the entire work.

Gloria--you have a lot on your pate with your novel series. It's no wonder you haven't written many short stories.

Good morning! I write short stories, too. I have one friend who likes to make them bloody (with red ink). I think about what she has done and go through the first time for easy needed fixed. The more complicated ones creep in. I have to watch, though, to make sure she doesn't take away my voice. And after all, the manuscript is my work, my vision and I have the ultimate say in whether I like the change or not.

I've been on both sides as an editor and writer. I thank my lucky stars that most of my editors have been terrific.

I hope Miss Grayling will have her own book!

You're right, Vicki. At some point, I feel like it's not my story anymore, but someone else's.

Shari, Most of the editors with whom I have worked have been very professional, and the end result is a greatly improved story. Someday I think Miss Grayling will have her own book, even if I have to self-publish. She's a somewhat demanding character, and has killed off several people so far.