An Interview with David Burnsworth by E. B. Davis

The award-winning diva, C, has got a big problem: someone wants her dead. A team of mercenaries attempts to gun her down in Kuala Lumpur. Lucky for her, Lowcountry Private Investigator, Blu Carraway, is already on the job there for a different client.

Double-lucky for C, they make their move when she’s chit-chatting with him in a bar. Unlucky for the mercenaries, four of them end up dead.

The hunt is on now for the mega-pop star. Where does she go to hide out? The sleepy islands around Charleston, South Carolina—Blu’s backyard. He’s already proven himself once, so C hires the Blu Carraway Investigation Agency to protect her for real.

The job takes Blu halfway around the world and several cities in between. The search for the truth reveals what could drive a person to want someone else dead.

And Blu Carraway ends up right in the way.
https://www.amazon.com/ 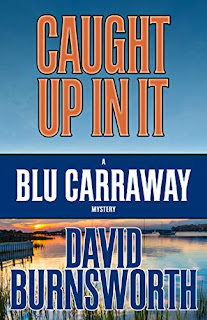 Caught Up In It is the fourth book in David Burnsworth’s Blu Carraway Mystery Series. It will be released next week by Henery Press. You can always count on fast-moving action when you read this series. The book starts in Kuala Lumpur, rounds through L.A. and L.V. and ends in Charleston, SC. Blu’s sidekick/partner Crome assists him in protecting a young, female popstar from the wrath of a businessman who failed to gain millions when she pulled out of deal. In doing so, they must face off against the Russian mob, the Los Vegas mob, and the popstar’s first security team.

Thanks so much for having me!

Is Kuala Lumpur, Malaysia a common place for popular singers to be?

That’s a good question and one I don’t answer in the book. In Caught Up In It, the artist C has been hired to entertain a private party for what I can only imagine was an exorbitant amount of money. She probably wouldn’t have done it otherwise except maybe on a tour.
I was surprised that C or Ariel took back her possibly incompetent security company after Blu saved her from the bar attack. Why would she do that?

Another good question! What I felt was that she wasn’t quite ready to sign off on her security detail at that moment. Blu Carraway, my protagonist and the one who saved her bacon, was already apprehensive for her. But as with some people, myself included, even in the presence of overwhelming evidence, they fail to see the forest for the trees until it’s almost too late. Lucky for C, she came to her senses.

Murder, the herd leader of Carolina Marsh Tackeys living on Blu’s island near Charleston, has colic. Dink, Doofus, and Sally, other horses from the herd, stand nearby Murder. Do horses comfort and keep each other company when sick?

Because I focused only on the herd living on Blu’s island and not necessarily on horses in general, I had to look that up. Horses do show affection for one another. The herd on the island is very close knit. The main ones I focus on in my books have distinct personalities. Murder is the leader and the other horses follow him. Dink and Doofus follow Murder, but only after they receive their treats from Blu. Sally hangs with Dink and Doofus. They are the strongest ones in the herd and so therefore are most likely to step up when Murder is down. 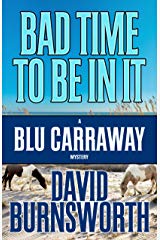 Blu and Crome are trying to quit smoking by vaping. Does it work?

Not for either of them. Not yet anyway.

Blu upgraded his car. Now he’s allowed air conditioning installed in his home. Is Blu getting soft in his middle-age?

He’s my age so he’s no spring chicken anymore. I would say, yes. Plus, he bears the burden of responsibility for those who work for him and who are his friends.

When Ariel tries to hire Blu and Chrome for her protection, why isn’t she upfront about the reason four hired guns almost killed her?

I would say she has business savvy but not worldly. Business is business but money has a habit of being a very good motive for murder.  Blu understands this, but Ariel doesn’t at first.

Pops, who owns a shooting range, flies a Confederate flag, but is devoted to his half-black granddaughter. Does he see the contradiction?

Blu who is half Cuban would say that Pops doesn’t.

I was surprised that Blu and Tess were a couple. Tess isn’t much older than Blu’s daughter Hope. Is it a longer-term relationship?

It appears to be long-term and frankly, it surprised me as well. I think they fit well together. We’ll have to wait to see what happens in the next book.

Are Tess and Harmony no longer investigative reporters? Will they continue to work for Blu?

Another surprise for me was how much Blu’s agency needed someone exactly like Harmony. She can go places and get information in ways that Blu and Crome can’t. By far, she is the strongest supporting character for Blu. Tess doesn’t receive a paycheck from Blu, but you are correct to say she does work for him.

Why does Crome disappear to Key West after each investigation? How can he be a partner in the business?

Crome struggles with responsibility and commitment. Key West is his escape. Blu tolerates him because they are best friends. I would say that someone smarter than me would call it enabling. 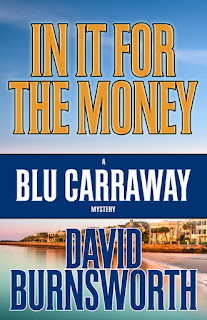 Ariel finally says that her former manager angered investors and pulled her out of a deal, losing them millions. She seems naïve. Killing her in revenge seems like killing the golden goose. Who would kill her?

She’s only the golden goose for those she works for. If she’s working for someone else, she’s making them rich which is counter productive to their enemies. I agree Ariel does some growing up in the book. Although, not enough in my opinion.

Harmony and Crome are a lot alike. Neither wants a committed relationship. Why won’t Harmony get involved with Crome?

Harmony understands that a relationship with Crome would mean she wouldn’t be in control, which is the one area in which they differ. Crome couldn’t care less about controlling someone else and will never put himself in a situation where he could be controlled for any length of time. I would say both of them know it would be a disaster, which could endanger others.

Why do they fly into Charlotte and have a four-hour drive to Charleston? Doesn’t Charleston have an airport?

What I’ve found lately is that airline pricing and flight availability is not necessarily logical. I suppose putting it in the book was my way of showing it. Yes, Charleston has an airport, but Charlotte is larger and has more flights. Sometimes it makes sense to have a long drive to avoid a longer layover in Atlanta or wherever. And sometimes the flights are cheaper when playing this game as well.

When Blu texts Crome, he types “JK.” What does “JK” mean?

“Just kidding.” It happened at a part in the book where Blu suggests something that anyone else would think was sarcasm, but Crome would use it as permission to do something totally wrong but in his mind was the right thing to do.

What’s next for Blu and Chrome?

I’m working on book 4 in the series now. As usual, the guys listen to what I say and then do the exact opposite. I tend to let them because they haven’t been wrong yet. 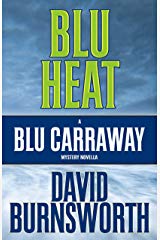 Congratulations! I look forward to reading your series.

I've read some of David's books, and look forward to catching up with the rest of them. Great reads!

Such a great series! Looking forward to the new one!

Best of luck on the third in your series. They sound like winners.