The Scent of Murder by Polly Iyer 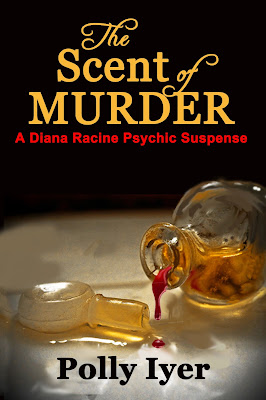 On January 9th, I released The Scent of Murder, the fourth book in the Diana Racine Psychic Suspense series. In 2002, when I wrote Mind Games, I had no idea it would be the first book in a series. I enjoyed writing standalones with a different heroine/hero each time. Did I really want to commit to a series?

Skip over a half-dozen years during which I wrote three more books, queried agents, was rejected by agents, found an agent, was rejected by publishers, and finally came to the conclusion that I wasn’t getting any younger, so I published all four myself, almost at one time.
Even though I still hadn’t thought of a series, Diana and New Orleans police Lieutenant Ernie Lucier, Diana’s partner in life and in crime, got into my head and wouldn’t leave. Okay, I thought, I’ll write a second book. That turned out to be Goddess of the Moon. Readers liked the characters and the stories. What to do? Write a third?

Standalones are self-contained. The characters live and grow in one book. In a series, not only does a writer have to develop her creations, she has to keep them in character from one book to the next. If that isn’t enough pressure, each book should be better than the last. We’ve all read books in long-running series that seem to have lost their spark, almost as if the writer phoned in the story. Hopefully, at only four books, that wouldn’t be my problem, but it was still a consideration.

A few reviews of Backlash, the third book in the series, declared it the best book of the three. In that book, the story revolved around Lucier more than Diana, so taking that route was a little risky. After all, it’s the Diana Racine Psychic Suspense series, and readers like Diana. I breathed a long sigh of relief over the good reviews.

Though my two main characters develop their own personalities over the course of four books, Diana and Ernie must also grow as a couple. Diana is no longer a psychic entertainer, she’s a police consultant … but she’s still Diana: impetuous, daring, and as we find out in book four, unpredictable, though the question arises that she may be more predictable than we thought. Does her reputation progress from being a charlatan psychic―which she never was except to skeptics―to someone worthy of being taken seriously?

Anyone who’s read my books knows I like to target as villains those who use their power to inflict damage on others and/or to benefit from doing so. The Scent of Murder is no exception. The powerful make great villains, and you don’t have to look far to see their counterparts in the real world. Taking them down in my books is the only justice I can control.

The big challenge in book four, in addition to keeping up the quality of the series, was to juggle two independent plots, two sets of villains, and two denouements. The theme in both plots is a missing woman, but that’s their only connection. Would I be able to keep readers focused, or would switching scenarios annoy them? There is also a new character, a ten-year-old boy, that I debated whether to make a permanent cast member. I didn’t know myself until the end. You’ll have to read the book to find out the answer.

By the way, Mind Games is free on Amazon today and tomorrow, if the series might interest you. Happy reading.

Polly Iyer is the Amazon bestselling author of nine books of suspense and three sexy romances written under the name Maryn Sinclair. She started out as a fashion illustrator and storyboard artist, importer, and store owner before embarking on her fourth, and last, career as an author. Writing opened new doors for her, allowed her to make wonderful friends in the community, and gave her carte blanche to put her fantasies into novels of excitement and romance. One reviewer described her stories as “…making heroes out of damaged people.”

Her novels include Hooked, InSight, Murder Déjà Vu, Threads, Kindle Scout winner Indiscretion, and four books in the Diana Racine Psychic Suspense series: Mind Games, Goddess of the Moon, Backlash, and The Scent of Murder.
Posted by E. B. Davis at 12:00 AM

How interesting to pull back the curtain on your process, Polly -- thanks for sharing!

I'm sure you have a similar process in your Tai Randolph series, Tina. It's how we keep it growing from book to book. Thanks for commenting.

Fascinating to read about how your series came about, and your other books as well.

Now off to see if I can't find that copy of Mind Games!

Maybe it's better not to plan too much, KM. Organic is the word of the decade. Hope you enjoy Mind Games.

Polly, I've downloaded the book and have every confidence you'll pull off your series writing challenges. Looking forward to reading it.

Congratulations on your fourth Diana Raince. Jan and I are both looking forward to reading it.

Thanks, Linda. I'm sure you know how I feel now that you're writing a hot series.

Thanks, Jim. I hope you and Jan enjoy the book.

Congratulations, Polly, on releasing #4! I really appreciate your sharing the behind the scenes of the series. Having recently completed #2 in my series, I completely relate to your process. Look forward to reading it!

Thanks, Lida. Best of luck with your series. Now you'll spend your thinking time devising ways to keep the series fresh. BSP: Here's a blog I wrote this week on that. https://bloodredpencil.blogspot.com/2018/01/keeping-series-fresh.html

The Scent of Murder sounds fascinating, Polly. It was already on my TBR list, but it just jumped a couple of notches. Good luck!

Congratulations, Polly. I've read other of your books and liked them. Now I'll have to start
reading this series.

Thanks, Sandy. I'm glad the book is jumping. Too many books, not enough time.

Thanks, Gloria. I've appreciated your reviews in the past. Happy reading.

Congratulations, Polly. I've always admired your work ethic. I love your characters and the complications and predicaments you put them in. My hat is off to you!

Thanks, Elaine, and thanks for your support over the years. My work ethic has slacked off a bit the last year or two, but I hope I'm back on track. As for the characters, that's what it's all about for me.

I can't wait to read this! Thank you, Polly, for continuing to revisit Diane, and for the glimpse into your process.