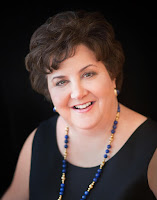 I already was nervous about writing a blog introducing myself to Writers Who Kill readers when Elaine Douts (E.B. Davis) asked me for a nefarious picture for the sidebar. Many words, including judge, author, litigator, wife, step-mom, mother of twins, community volunteer, Sisters in Crime Guppy president and national board member, Southeast Mystery Writers vice-president, and loyal friend have been used to describe me, but I’ve rarely been accused of engaging in activities characterized as wicked, evil, sinful, or criminal.

There was a time, early in my career as a trial attorney for the Department of Labor, when I was co-counsel on a case of first impression dealing with equal pay in higher education in the state of Georgia that the other side, when being kind, referred to me as “That Damn Lady Lawyer,” but it was for my hard work digging into the facts and evidence rather than for monstrous behavior. During the years I sat on the bench as a federal Administrative Law Judge, I’m sure the attorneys appearing before me said different things, but I hope most included integrity and fairness as opposed to fiendish or diabolical.

Since my first book, Maze in Blue, a mystery set on the University of Michigan’s campus in the 1970’s, was published in 2011 and won an IPPY award in 2012, the standard headshot I’ve used, as seen above, has been meant to be friendly and open rather than depraved or monstrous. In fact, even though my two novels are mysteries, their covers hint at crime while making it clear they have cozy elements.

2017 allowed me to call myself a “Cover Girl” when my name for two short stories made the covers of the magazines they appeared in. Believe me, I was on top of the world when my best story to that point, The Night They Burned Ms. Dixie’s Place, my first attempt to be published by Alfred Hitchcock Mystery Magazine succeeded (May/June 2017). It was icing on the cake when Mystery Weekly featured Day After Thanksgiving Soup on its cover. Each time, I smiled and danced with such abandon that anyone would have been hard-pressed to attach a negative adjective to my behavior. 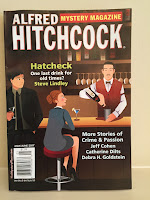 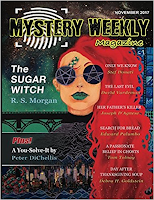 Faced with a busy schedule and the need to submit a nefarious picture, I mentioned my dilemma to a friend while we were at dinner at another friend’s home on a rainy night. The next thing I knew, she had me sticking my face out from behind the wrought iron of our host’s front door while she snapped a picture with my cellphone. Between the weather and my deliberately stern pose, I thought we had my nefarious picture. My friend wasn’t satisfied. She suggested we create a picture around a colored steam machine. A shout-out to Penny H. who, as you can see from the sidebar picture, captured my nefarious side. The irony is, after a life on the straight and narrow except for my murderous writings, I liked the feeling. Stay tuned – every third Monday.

Welcome to Writers Who Kill, Debra. The concoction looks nefarious, but your smile? Not so much. I think you might need to watch the Wizard of Oz and check out how the Wicked Witch of the West does a nefarious smile.

Welcome, Debra. Glad you are writing for us. I think most writers live in their heads rather than act out in public (except for occasional role playing). We want good to prevail over evil, but must portray evil as authentically as we can. As for our pictures--humor above all else! Thanks for joining WWK.

Welcome, Debra, and congratulations on your successes to date! I'm looking forward to reading more from you!

Welcome, Debra. Love the picture. I look forward to reading more of your blogs--nefarious or not.

Jim, E.B., Julie, Margaret, and Grace, thank you for welcoming me to Writers Who Kill. Thrilled to be here. (How do you guys get up so early????) Art, Thanks for reading this blog --- and it is a natural picture, don't you think? Sorry Jim, I'm lucky I could get a smile -- I'm notorious for never smiling in pictures....... so this was as witchy as I could get.

Congrats on joining WWK! Loved your post. I wouldn't say your picture is nefarious, but it IS intriguing. Maybe you're brewing up something evil and you're delighted about it!

What a fun story, Debra! Can't wait to read your posts.

Kaye, That's as nefarious as we could get. Believe me, I don't take great pictures....but I love brewing up evil thoughts.
Edith, Thank you. Enjoyed your post today at Wicked Cozy Authors. dhg

Welcome Debra. I loved your first book and can't wait to read the 2nd one. As you can see from the first picture which is me, I made a scarecrow and stabbed it. O the cover of my first book I had my son dress up in slacks and a dress shirt to pose as a body when my step-granddaughter who does my covers couldn't find a picture of a dead body. She put a garden fork in him on the cover only.

Welcome aboard, Debra! I like your nefarious side - fun to let loose a little! I loved Miss Dixie and I'm looking forward to reading more of your short stories and blog posts.

Welcome to the dark side, Debra! It's great to have you here!

How nice to see your face again, both the usual pic and the new one your friend took. You are moving along in your writing career at a good pace. I do envy you. This was a good, friendly post with more information about who you are and what you write. Thank you.

As a lawyer in Alabama, I may, or may not, have encountered either nefarious counsel or judges before, but I'll never tell! Great blog post.

I'm probably the least nefarious person on the planet, so I'm not sure I'd recognize nefariousness anyhow!

Happy to see you join us! I've read some of your work, and enjoyed it.

Congratulations on joining the blog! I regularly read here. I've always liked your cover with the Mahjong tiles as I play Mahjong. Hugs, vb

Thanks for the warm welcome..KM, Kait, Shari, and Gloria. Vicki, Nancy, and Linda, appreciate you following the block.

I just love reading your blog. There were parts of it, I had to read over and over again because it so clearly brings out your true character. You are such an awesome person and a pure delight to talk to and listen to.