Travel is a great teacher. 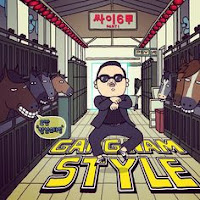 When you travel to a new place, it’s impossible not to pack a few expectations along with your passport.

Rome? One expects traffic, the Coliseum, and model-handsome men on Vespas.

South Korea? The DMZ. The Korean War. Kias.
Gangnam Style.
But when I visited my daughter and son-in-law last month in South Korea I learned a lot I didn’t expect. Here are a few of those lessons: 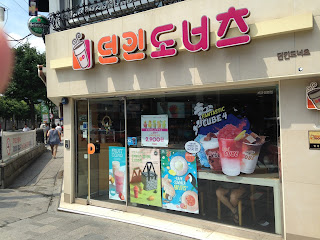 The most humbling lesson? I learned what it is like to be illiterate. Korea uses a complex character based alphabet called hangul. In general, South Korea does a great job of bilingual Korean/English signage in tourist spots, better than China or Japan according to my globe-trotting daughter. The airport and train stations were particularly English-friendly. But once outside these areas, I found myself groping for clues. Did that symbol mean coffee? Was it okay to enter this door? After awhile I just relaxed and relinquished control, relying on my child to guide me. Also, many Koreans, especially young people, speak English and were friendly and eager to help.

Pokemon Go? Try Tourist Go. You, as a Westerner, will be the star of many vacation photos. Those aforementioned helpful young people will want to take a selfie with you. I wondered if this was a homework assignment – ask an English speaker for a photo. My blue eyed, blond daughter took these requests in stride. I still laugh that somehow I landed in Cindy from China’s Instagram feed.

South Korea is more technologically advanced than we are. Modern Korean apartment doors open with keypads that not only spin a cool safe-cracker wheel but also play a little musical ditty I think of as “Don’t Worry! Be Happy! Your Door Is Locked.” Trains and buses are sleek and run on time. When the train approaches the station a “Rocky” fanfare plays. However, traditional courtesies remain: Conductors bow upon entering and leaving the train car.

As you might have guessed from the playful musical embellishments, South Korea has an inner child unafraid of self-expression. Young women who could grace the cover of any sophisticated fashion magazine sport sparkly pink headbands and Minnie Mouse bows.  Guys wear t-shirts with cartoon characters you’d see in American kindergartens. Speaking of cartoon characters, every town has a cartoon “ambassador” to brand their city. I think this is a reaction to being not many years distant from a devastating war and living so close to a country run by a madman. As my professors would say, “Discuss.”

Even so, my daughter reminds me that most Koreans are more concerned about finding a parking space in Seoul than they are about North Korea. 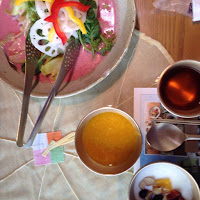 There are not only Hello Kitty cafes in Korea, but also sheep cafes, cat cafes, and raccoon cafes where you can enjoy your coffee while you visit with the animals.

The food was great. I ate a lot of things I couldn’t identify, but it was all good.

There is one trashcan in all of gigantic Seoul train station and no paper towels anywhere. South Korea’s 50 million people share a mountainous country approximately the size of Indiana graced with ancient palaces, temples and natural beauty. Conservation and recycling are a way of life. 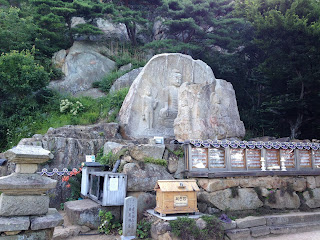 Because of those spectacular mountains, Koreans like to hike. Grandmas in house slippers zoomed by me on the trail up Namsan Mountain in Gyeongju National Park. In addition to the beautiful scenery there, one hikes past ancient Buddhist statues and a temple where you can stay and take part in the life of the nuns and monks. At a rest stop on the trail by a centuries old statue of the Buddha, a nun-in-training greeted us with hard candies and tea. Not only did she speak English, she was from the town where I live!

The most important thing I learned? The world is small.

What have you learned on your travels?
Posted by Shari Randall at 12:00 AM

What a fantastic trip! And your photos are terrific. We had a similar experience with hikers in Australia this summer. About the time my energy dropped to zero, an older couple zipped past and left us in the dust. As a result, we've been out walking and hiking a lot more since we got back. :)

This sounds like a wonderful trip. One of the interesting things about traveling is to gain an outsider's perspective on the U.S.

I remember being in Africa and was asked where I was from. "America," I said. "North or South," came the reply. Talk about self-centered assumptions on my part.

Multiple times on my last trip to Canada I was asked what I thought of Donald Trump. Sometimes before I could answer, I was told exactly what they thought.

wonderful trip for you and great photos.

We were in London and Copenhagen immediately after the 2013 Federal furlough and had a frustrating time explaining to our overseas friends exactly what had happened and why.

Jim - That was the No. 1 topic of conversation with every Australian we met, too. Very strong opinions worldwide, it seems.

My husband and I had the pleasure of visiting South Korea this past spring. Like you, we found the people very helpful. When we asked a woman where we could find a post office, she insisted on walking us down several streets to find it. During our long voyage, which included stops in 42 ports, we saw a good deal of the world. It was humbling and taught us that the U.S. is not the center of the world.

Shari, what a wonderful trip, and I love the pictures. I've been on a Holy Land tour of Rome, Israel and Greece years ago. It was fascinating. I've been to Great Britain twice, and want to go back, and to Italy and Spain. On every trip I learned something new.

In Madrid, my daughter wanted a breakfast with eggs, so we wondered around and finally came to a little corner cafe where we could see he cook fixing an omelet or something so we went in and got a seat at the counter between several men talking or reading the newspaper. We tried to tell the cook what we wanted and he looked confused, so I started flapping my elbows and clucking like a hen. Everyone laughed, but we got our eggs. The man with the newspaper understood English and asked if we were Americans. Then it got into a discussion of American politics to a very limited conversation. We did learn at that time that they didn't approve of President Bush.

Hi Julie - I, too, have been inspired to do a LOT more walking!

Hi Jim - I've been guilty of the "America" thing, too. Travel is definitely good for adjusting one's perspective. And, yes, Donald Trump was a topic of conversation.

Hi Margaret - Thank you! Sometimes it is hard to explain our country. When I see it from an outside perspective, I do end up scratching my head.

Hi Grace - your trip was absolutely amazing and I hope you'll share even more of your experiences here. Gee, I thought the center of the world is wherever I am, right? :)

Hi Gloria - I love your hen story! Laughter is the international language, isn't it? It is interesting to see how many people overseas follow our politics, and have strong opinions on it. We could barely get through a day without hearing the T-word.

I recently travelled to Cuba which had a combination of cutting edge modern and crumbling past, sometimes next to each other.

Warren, I would love to go to Cuba. What a fascinating trip you had! I hope you'll share some photos!

WOW. This is fascinating! Thank you so much for sharing all these details! What a wonderful post, Shari!

Hi Susan, thank you for stopping by. It was so cool to go somewhere so different from my own life. I feel very fortunate to have had the opportunity.

Thank you for taking me to South Korea with you! I'm not sure I'll ever actually make it but you have painted it so brightly, I'm now very tempted!

One of my brothers lived in Seoul for several years, and he had lots of tales of how seriously South Koreans take courtesy, and how important it is to them to present a good impression to the world.

I'm not sure how much traveling I can do anymore (maybe more after I get a new aortic valve in my heart!) so I'm very glad I went some of the places I did when I was a little younger.

I've never quite understood how we get away with calling ourselves "Americans" rather than residents of the US, since there are so many other countries in the Americas. I remember, as a child, encountering someone from Argentina, who pointed out that she, too, was an American.

Hi Sherry! I never thought I'd ever go anywhere in Asia, but it is so fascinating I'd love to go again. Though the long flights do give me pause.

KM, I loved hearing about your brother's time in Korea. I hope you'll feel up to tackling all the places on your wish list. I'm trying to remember to say "I'm from the United States," but it is hard to break old habits.

What a fabulous post Shari! You made me feel like I was right there with you. South Korea is one of the places I dream of visiting. I love Korean TV and movies and I've even written posts about it. Hopefully I'll be following in your footsteps sometime in the near future. 😀

Hi Diana, Thank you for stopping by! I'll look for your posts on Korean TV. I've seen just a bit of Korean TV and I am also a fan of K Pop. They have such great, crazy energy!

I loved hearing about your trip! South Korean is someplace that's hard to picture, so it's fun getting the inside scoop!

Not playing Pokemon Go? Download The Latest Version (Available for iOS or Android)