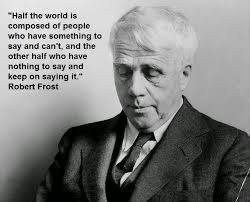 This month is National Poetry Month. Last week getting a head start on the month, Robert Frost came to speak at a local branch library. Well, he didn’t exactly come back from the dead as a one hundred and forty-one year old man, but Sam Allen, a scholar of Robert Frost, who is an interpreter, came in his stead. Robert Frost is one of my favorite poets. Since my friend Laura and I both write poetry, I asked her to go with me. The room was crowded and everyone enjoyed Sam Allen’s performance as an interpreter and answering any questions we had afterwards. Since I read Robert Frost, The Aim Was Song, a biography of Frost by Jean Gould years ago, there wasn’t much new he presented, however he did refresh my memory. 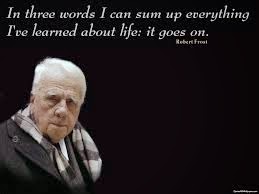 I remember a poetry class I took in college as an older non-traditional student in her forties. Our professor, Betsy Hoobler, asked us to bring in our favorite poem to read to the class with copies for each student. Even at that time Frost was one of my favorite poets, so I found it difficult to pick just one poem from his amazing collection of poems. Finally, I came across one, that wasn’t exactly my favorite, but suited my purpose “A Blue Ribbon at Amesbury.” 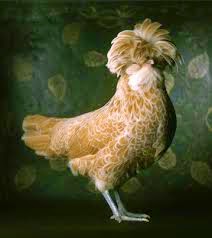 For a period, Frost was a chicken farmer, and the poem was about one of his hens winning a ribbon. Since I had a flock of chickens, although I’d never shown any, I plucked a Polish hen with her feathery top knot from the flock, put her in a cloth book bag, tucked a towel over her and took her to class. For those of you who don’t know this, chickens and all birds when covered and in the dark, become quite still. She remained relatively quiet next to my leg in her bag only moving occasionally. At my turn, I went to the head of the class, handed copies of my poem to those in the front row seats to pass back, and then took my hen out and placed her on the floor at the front, where she clucked, deposited a moist calling card on the floor, and the class erupted in laughter. They laughed so hard that they couldn’t hear me as I read my poem to them. Something ironic happened a short while later, when another professor – a wonderful poet – came in to recite some of her poetry to us. By now I had my hen safely back in her bag. The second poem this professor recited was about her pet rooster that her uncle had cut the head off for dinner. 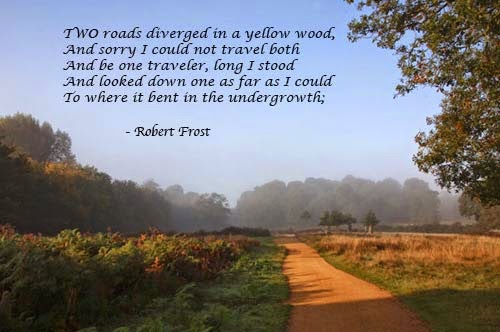 As many men of genius, it took Frost a long time to get recognition of the poet he was. In those years he held many jobs. He went for a brief period to Dartmouth College and later to Harvard, dropping out of each so he never earned a degree. Over the years he held many occupations; teacher, cobbler, editor of the Lawrence Sentinel, working in the mill owned and run by his grandfather, and farmer. 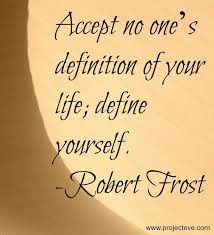 His first published poem, after numerous rejections of poetry submitted to numerous venues, was “My Butterfly” which appeared on November 8, 1894 in the New York newspaper The Independent. For that poem he received fifteen dollars, which then was a huge amount for a poem. However, it was the last poem that was accepted for many years.

In 1895 he married Elinor Miriam White, whom he’d shared valedictorian honors with in high school. He courted her for many years, and she finally gave in and married him. 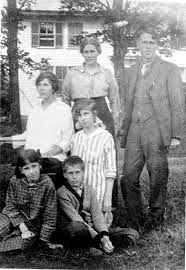 After many rejections of his poetry, Frost and his wife moved to England in 1912. It was there he finally met with success and had two full length collections published of his poetry: A Boy’s Will and North of Boston. They sold well and when he returned to America, his reputation was established. By the 1920s he was the most celebrated poet in America.

Although his life is associated with the life and landscape of New England and was a poet of traditional verse forms and metrics, he remained aloof from the poetic movements and fashions of his time. However, he is more than a regional poet. His poetry is searching and often has dark meditations on universal themes, as well as having layers of ambiguity and irony. 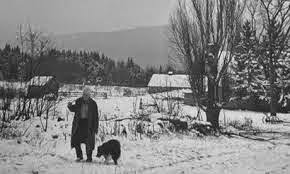 In a 1970 review of The Poetry of Robert Frost, the poet Daniel Hoffman, described Frost’s early work as “the Puritan ethic turned astonishingly lyrical and enabled to say out loud the sources of its own delight in the world.” 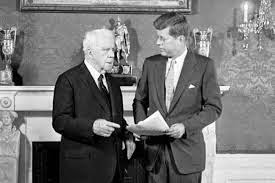 Robert Frost was the first poet to deliver a poem at an inauguration as he did for President John F. Kennedy. Kennedy said about this, “He has bequeathed his nation a body of imperishable verse from which Americans will forever gain joy and understanding.

There have been many biographies of Robert Frost, and he has become probably one of the most loved poets in our country and beyond because even if people don’t always understand the underlying meaning of his work, there’s something about his poetry that resonates with us. He is often telling a story in his poems like in The Death of the Hired Man. Although his poetry seems simple with his rhymes and seemingly simple themes, in truth they aren’t. They’re works of a genius. I personally cannot pick a favorite from among his hundreds of poems. 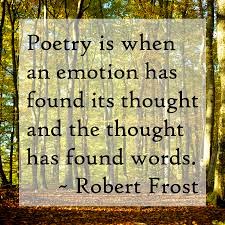 Do you have a favorite poet?

Do you have a favorite Robert Frost poem?

Frost is definitely one of my favorites. I think I can recite all of "Stopping by Woods on a Snowy Evening". Another is Emily Dickinson. And then there's Billy Collins--love him.

Thanks for all the info on Frost. I didn't know all of this.

Kaye, you listed my three favorite poets. When I have trouble falling asleep, I often recite in my mind "Stopping by Woods on a Snowy Evening"
over and over and then sometimes recite Emily Dickinson's "I Like to See It Lap the Miles" or another one of hers. I don't have any of Billy Collins poems memorized by I have three of his books beside my nesting chair.

I am fond of William Blake. May have something to do with my husband being a Blake scholar. I can recite from memory more poems by Frost and Blake than any other poets. I do have a Billy Collins book on my night stand.

Patrick Kavanagh, Maya Angelou, Emily Dickinson, Robert Frost and pretty much everyone else. In my Read 'Em and Eat novels the tables in the cafe are named and decorated for authors. Frost and Dickinson each have a table. My favorite poem: Raglan Road by Pat Kavanagh.

I recall seeing Frost deliver his inaugural poem. My mother had him appear in her college English class. She said he was hard to understand and she didn’t get the poem (she can’t recall which one it was). I think of him as a very accessible poet, using common words for their sound and meaning.


KB, I like William Blake, too, and I have one of his books of poetry, but I haven't read it in some years. I'll have to get it out and read his poetry again.

Terrie, I love Maya Angelou. I once heard her speak at a college campus near me. I'll have to get your books and start reading them.

Jim, I saw Frost read his inaugural poem, too. You're right about him being an accessible poet. Even if we don't always catch the underlying meaning, the poems still come alive for us.

Love Frost, Dickinson, yes! Also Shel Silverstein - your students probably liked him too, Gloria. His poem "Invitation" is perfect for writers:
“If you are a dreamer come in
If you are a dreamer a wisher a liar
A hoper a pray-er a magic-bean-buyer
If you're a pretender com sit by my fire
For we have some flax golden tales to spin
Come in!
Come in!”

Have you read Billy Collins? He can relate to all ages of his readers and especially students in poetry classes who are asked to dissect poems and figure out the "poet's meaning." Try his "Sailing Around the World: New and Selected Poems" (2001).


Beth, I certainly have read Billy Collins. I have three books of his beside my nesting chair. Also, he's often a guest on Garrison Keillor's Prairie Home Companion so I hear him there.

I often think of Robert Frost's poem "The Road Less Traveled" when I have an important decision to make.

One of my favorite poems is "I Know Why the Caged Bird Sings" by Maya Angelou.

Gloria, I love your show-and-tell Frost story. My Frost favorites include "Dust of Snow" and "Desert Places" -- two different responses to snow.


Kara, I like that poem, too. I also love Maya Angelou's poem "I Know Why the Caged Bird Sings." I was so happy to actually see her on stage once at a local college.

Maryann, I don't remember those two poems. I'll have to look them up in my huge volume of Robert Frost poetry. Those two poems would have interested me this past very, very, long winter.

Although I like poetry, I don't read it much anymore. When I was younger I did--now, I'm into books. Frost is one of my favorites. He has an American feel with universal appeal.


E.B. I'll admit I don't read as much poetry as I used to. Like you I now read more books, although not as many as you read, I'm sure. Actually, before I went to college and became a teacher I read at least four or five books a week. Now it's something like six or seven a month. However, I still do write poetry.

I believe the Amesbury Fair is the same as the Topsfield Fair, in Essex County, MA. It's the country's oldest agricultural fair. I can remember going with my cousins as a child. It's still there every fall!

For many of us, Robert Frost is an old, comfortable favorite.

"I took the road less traveled by, and that has made all the difference.


KM, you might be right about that name change, but then he was living in either Vermont or New Hampshire at the time. I always loved going to the fair every year, but I haven't for at least ten years now.

I like how you said he's a comfortable favorite. I so agree.

We learned Frost's poems as schoolchildren, and they still resonant as I go through life: trees, woods, night, snow, animals. "Stopping by woods on a snowy evening" always comes to mind when I'm out with the dogs in the late winter afternoon.

Unfortunately, we never learned any poetry in school. I asked someone I graduated with if any teacher had ever read or had us read poetry, and she agreed we hadn't had teachers who read to us or recited poetry. So sad, but I must have read it on my own because I was writing poetry as a teenager and had devoured books as soon as I learned to read.