An Interview with Annette Dashofy 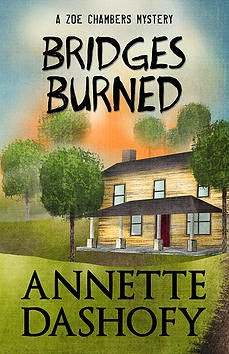 Annette Dashofy’s Malice nomination for Best First Novel is well deserved due to Circle of Influence, the first of the Zoe Chambers mystery series, which has made Annette a bestselling author. But Annette didn’t stop the suspense.

Lost Legacy, the second book in the series, continued the burning emotion. Main character, Zoe, searches for truth about her family’s history, her losses, and character-building confrontations. In the third book, Bridges Burned, Annette brings the emotional intensity back by exploring the bounds of interpersonal relationships.

I’ve come to look forward to reading Annette’s work, anticipating a quality read that puts readers on edge. Henery Press will release Bridges Burned April 7. Look for it at your favorite retailer.

Paramedic Zoe Chambers is used to saving lives, but when she stops a man from running into a raging inferno in a futile attempt to rescue his wife, Zoe finds herself drawn to him, and even more so to his ten-year-old daughter. She invites them both to live at the farm while the grieving widower picks up the pieces of his life.

Vance Township Police Chief Pete Adams, of course, is not happy with this setup, especially when he finds evidence implicating Zoe's new houseguest in murder times two. When Zoe ignores Pete's dire warnings, she runs the very real chance of burning one too many bridges, losing everything--and everyone--she holds dear.

Annette, you’ve become a bestselling author. How does the Malice nomination affect you? Will a win prove anything you haven’t already proven?

I could get all businesslike and talk about how the nomination boosts name recognition and sales, which is great. But the emotional side of the nomination has me walking on air! I feel a little like Sally Field’s acceptance speech. They like me! They really like me! Seriously, as a typically insecure author who lives in her own head most of the time, it’s great to have the acknowledgement that others “get” what I’m doing and enjoy it.

The central issue in Bridges Burned is the development of farmland for housing that will not only change the landscape but also the way of life. Is this an issue in your locale?

Housing hasn’t taken hold that much in my immediate area, but in neighboring townships, I’ve watched beautiful old farms completely annihilated by the kind of development in Bridges Burned. Home buyers move into these big homes and start complaining about the neighbors’ horses, chickens, cattle, which have been there for generations.

Locally, we’re losing our farms to the industrial world of Marcellus Shale. A topic for a future book, perhaps.

Even though money is cheap right now, why would a developer buy more land when the parcel he already owns isn’t faring well?

I think land speculators are hopeless optimists—gamblers if you will—who always believe the market is going to turn around any minute now.

One aspect of writing in multiple POVs allows the reader to experience many characters’ perspectives. Many characters in Bridges Burned second-guess their decisions after events occur. Is this human nature, or were you making a point?

A little of both. I love the heart versus head conflict. Do we follow our heart when we should use reason? Or do we over-think things when we should just DO IT. I’ve been guilty of both at times. I love exploring human emotions on the page.

Pete questions the course of his investigation by measuring his dislike for a suspect against the evidence in his possession. Can professionals maintain objectivity or is it a lost cause?

I think they can. But it’s more fun to write about professionals in conflict! Not to tease or anything, but I think Pete and Zoe hit rock bottom in this one, which means they have lots of room for growth in future books!

Like calling a glass of water half-full instead of half-empty, Pete and Zoe see the same evidence in different perspectives, causing a rift between them. Neither knows the truth. What difference in values causes them to evaluate the evidence so differently?

They’re coming from different mindsets. Pete’s been a big city cop. He’s seen the worst in humanity and wants to protect those he cares about from the evils in the world. Zoe’s been through a lot, but she’s a caregiver at heart. So you have the warrior butting heads with the nurturer. They both want the same thing, but they go about it in different ways.

Zoe figures her solution to a problem is a win-win situation. Why does Zoe seem so sure of her decisions?

I don’t think she’s sure at all. For Maddie’s sake, she doesn’t want Pete to be right, so she keeps plunging ahead, willing things to be the way she wants them to be. But she trusts Pete’s gut enough to have some doubts.

I was surprised you didn’t bring up illegal or slovenly building inspections by the county since Sylvia serves on the counsel. Was this an intentional omission?

There were a lot of aspects of the industry I could have delved into, but didn’t. I wanted to stick with the heart of the story I was telling. Let’s just say, there were other actions taking place OFF the page. Crooked building inspectors might be a subject I play with another time.

Ryan Mancinelli fascinated me. His wife, Ashley, suffers the greatest being sandwiched between her husband and parents. Do you know any veterans suffering from PTSD?

Not to extent that Ryan suffered with it. I had a cousin who served in Vietnam, who carried a lot of internal scars. He and my dad, who was a WW II veteran, used to go off by themselves and talk about their combat experiences, but would never share them with the rest of us. I had that relationship in mind when creating Ryan’s character.

Mr. Kroll and Maddie are characters most readers can sympathize with since they are both in vulnerable positions. They are also the ones who Zoe wants to help the most. What draws readers to these characters? Why do we champion the weak?

It’s the caregiver thing again. We’ve all been in a vulnerable situation at some point, although hopefully not to the level these two reach, so I think we all connect to what they’re going through and want to ease their suffering.

In Lost Legacy, Zoe makes a decision to become assistant coroner, which gives her access to information and expedites her case. Now, she’s stuck with that decision and finds herself unable to perform during an especially nasty autopsy. How will Zoe cope, or will she resign?

Honestly, I don’t know! This is a thread that continues to play out in the next book, and I won’t know until I write that sixth autopsy whether or not Zoe decides to stick with the coroner’s office or chooses to focus on emergency medicine.

Pete is offered a dream job in Hawaii. If he could persuade Zoe to move, would they go?

One of my critique buddies keeps pitching that idea to me! I think Zoe is too much of a country girl to be happy in such a different locale. Might be a fun research trip, though!

Why is Sylvia the only one who can give Pete a kick in the pants? 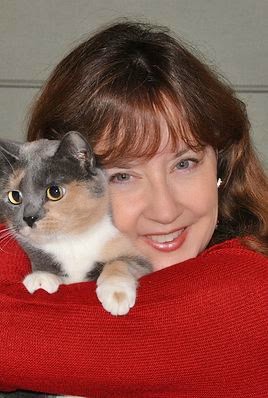 Besides the fact that Pete has seen the damage Sylvia can do with that handbag of hers? Ha. Pete lost his mother when he was fairly young, and Sylvia took him under her wing when he first moved to Vance Township, becoming a surrogate mom to him. One of these days I’m going to write a short story and address their history.

What’s next for Zoe and Pete?

I’ve signed with Henery Press for three more Zoe Chambers mysteries, and I’m working on the next one right now. In it, emergency personnel are being ambushed when responding to fraudulent calls. Characters we’ve already come to know may fall victim, and Zoe and Pete are definitely in the killer’s crosshairs.
Posted by E. B. Davis at 12:00 AM

You've done it again. Given us an excellent interview with a great writer whose series can keep us all wanting more.

Your books are on my TBR pile and I keep looking forward to reading them. No excuses, just saying the TBR pile is well into triple digits. I am working on a deal that allows me to stay alive long enough to read them all.

Hi, Joyce! *waving back* And thanks! EB always asks the BEST questions, Warren. Jim, I understand completely. When you ink that deal, let me know. I think I need you to negotiate the same one for me!

Great interview with a great author for a great book. No, that's not too many "greats" in one sentence.

Let me know, Jim, if you broker a deal. I have a spot on the beach where I could read forever.

When I interview authors, I'm lucky because most of the time I get advanced copies. It's a treat!

Thanks again, Annette, for granting an interview, joining us, and writing page turning books. Keep up that intensity!

Annette, I loved your first book and planned to get your second, but like Jim, I have a huge TBR books. I'm definitely going to get the 2nd and 3rd at Malice. I nominated you, by the way.

Oh, thanks so much, Gloria! Be sure and catch me at Malice and say "hi." That goes for all of you. I suspect I may be a little glassy-eyed and overwhelmed during the whole event, but I don't want to miss anyone!

Welcome, Annette! I too love the heart versus head conflict. I'm so glad you mentioned that!

Hi Annette, I am reading Circle of Influence and it kept me up way too late last night! Looking forward to meeting you at Malice.
Best wishes,
Shari

I'm so sorry, Shari. Ha. No, I'm not! I love learning I'm responsible for a reader's lack of sleep! Be sure to stop me and say hello at Malice. I look forward to meeting you, too!

Great interview! I enjoy Annette's books, and am glad to know another one is on the way.

Thank you so much, KM!