An Interview with Susan Boyer


For me, each case was a puzzle. I needed to find all
the pieces, orient them the right way, and fit them
together until the picture became clear and complete.
—Liz Talbot
Susan Boyer
Lowcountry Boneyard
(Kindle Location: 809)

I write supernatural mystery, so of course I’m a Susan Boyer fan. Her protagonist, Liz Talbot, doesn’t rely on her dead best friend, Colleen, to solve cases, but if she can help, Liz accepts, which saves her life on occasion. Lowcountry Boneyard sticks to the action-packed investigation with few detours. Nate, her work and love partner, takes some of the workload off Liz, but he also increases her stress by issuing an ultimatum about their relationship. Most of the action in this edition takes place in downtown Charleston, S. C., a switch from previous books. But Stella Maris Island, the beach house, family, and dog still appear and appeal. Lowcountry Boneyard will be released on April 21st. Look for it at your favorite retailer. 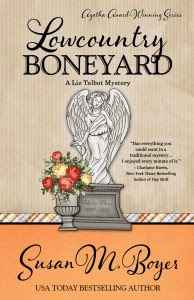 Where is Kent Heyward? The twenty-three-year-old heiress from one of Charleston’s oldest families vanished a month ago. When her father hires private investigator Liz Talbot, Liz suspects the most difficult part of her job will be convincing the patriarch his daughter tired of his overbearing nature and left town. That’s what the Charleston Police Department believes.

But behind the garden walls South of Broad, family secrets pop up like weeds in the azaleas. The neighbors recollect violent arguments between Kent and her parents. Eccentric twin uncles and a gaggle of cousins covet the family fortune. And the lingering spirit of a Civil-War-era debutante may know something if Colleen, Liz’s dead best friend, can get her to talk.

Kent is an intriguing character and the focus of the case. She’s an heiress. Why was her father so opposed to her artistic talent and career as a painter? It’s not as if she has to earn a living.

Well, I can only give you Liz’s opinion, of course. She thinks there are several things going on there. He’s overprotective, has a low opinion of artists in general, and he wants Kent to have a traditional Charlestonian matron’s life. But more than that Liz suspects that Colton Heyward has no illusions about his in-laws. He knows plenty and reckons a great deal more. Kent’s love of painting is one she shares with her maternal grandfather, C.C. Bounetheau. Liz believes Mr. Heyward would discourage anything that might strengthen Kent’s ties to the Bounetheaus.

Have you ever experienced being close to a fatal situation and knew you could have been the victim?

Not that I’m aware of. But I have experienced situations where I believed if I’d arrived on the scene a few seconds earlier or later, it could easily have been a fatal situation. Once, a truck going in the opposite direction on the Interstate lost a load of lumber. Some of it came flying across the median and struck the pavement not very far in front of our car. That was scary.

Liz’s mother, Carolyn, cracks me up. If Liz has nude lips, Carolyn always suggests Liz apply lipstick even after a near fatal car accident. But after her morning runs on the beach, Liz skinny dips in the ocean. Is Liz rebelling against her Southern belle mother’s appearance-oriented culture? How about when she wears white capris after Labor Day?

I don’t think Liz so much rebels against her mother as she just sees the world differently—though Liz is a girly-girl, too. But while Liz primps before going out, her mother primps first thing every morning before making breakfast and freshens up regularly. Liz humors her mamma most of the time if she’s in her presence as a matter of respect. But Liz is going to live her life on her own terms.

Would you give our readers a quick tour of downtown Charleston since most of the story’s events take place there? 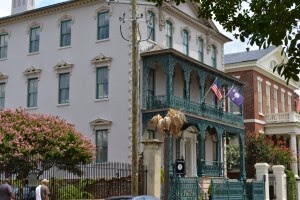 Oh, wow. I don’t think I can do the Holy City justice in a paragraph—that would take a book. As a general overview, the City of Charleston is a peninsula formed by the convergence of the Ashely and Cooper Rivers. The three main streets that come to mind, which run the length of the city are King, Meeting, and East Bay. Broad Street crosses all three, and serves as a boundary between the bustling business district to the north where you’ll find all manner of shops, galleries, restaurants, et cetera, and the historic residential neighborhood situated South of Broad. Of course there are residential neighborhoods north of Broad as well, but when folks think of historic homes in Charleston, they think South of Broad. Lower Legare Street, where the Heywards live, is one block west of King Street.

Nate, Liz’s significant other, acts the ass in this story. Why do men compete against each other even when one is history? Is Liz’s capitulation his victory measured by her sacrifice?

Who knows why men act the way they do? I don’t want to give away too much of the story here. I will say that in Nate’s case, Liz believes he carried some insecurity born of her history. Also, her family interacts with each other much differently than his, and that plays a role in his understanding her motivation.

Merry’s new boyfriend seems to fit right into the Talbot clan. Why?
I think Merry would be careful to choose someone who would fit in with her family. Family is very important to the Talbots. They’re very close-knit.
Colleen and Liz converse in public. Because Colleen is a guardian spirit, unseen by anyone but Liz, she is aware that others will view her as “Not Quite Right.” How does Liz deal with this problem?
She develops a habit of wearing her earbuds in public most of the time. This way, when folks see her talking, they assume she’s on the phone. Unfortunately, there are situations where good manners dictate Liz can’t wear her earbuds. Accidents happen. 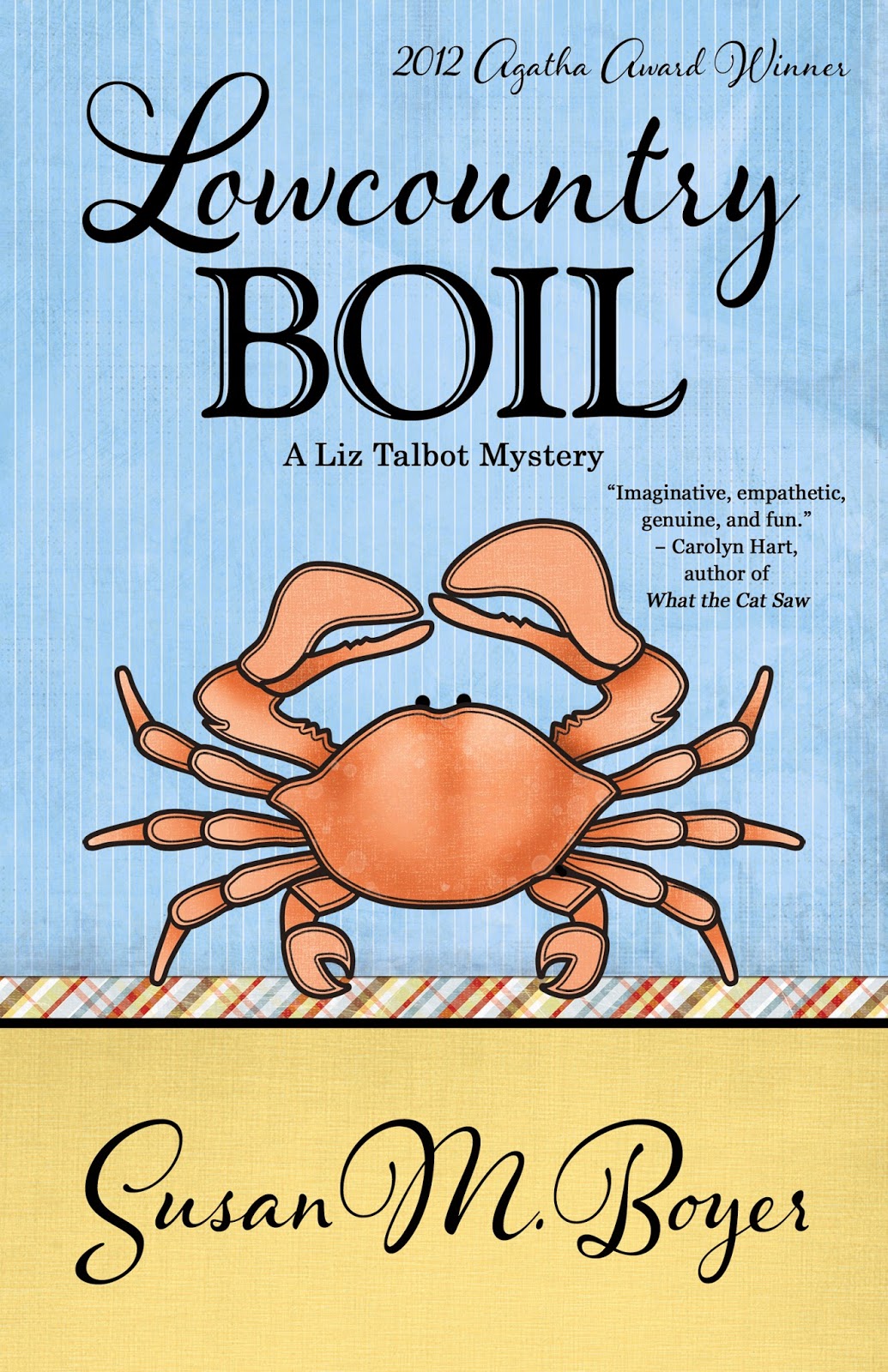 Liz’s beach house is broken into. She employs the use of advanced technology to monitor her property. The description of the systems that can been accessed and disarmed via smart phone seemed complex but fascinating. Did you research alarm systems?

Yes, and in fact we have one with that very feature. I’m fascinated by technology, so Liz is comfortable with it.

To make readers understand and give credence to Colleen’s supernatural existence, how did you define Colleen’s world and its parameters? She is now eating and has substance. Why does Colleen insist she isn’t a ghost? Did you plan what she could and couldn’t do?

The lowcountry of South Carolina has such a rich history of ghosts, spirits, et cetera. Personally, I believe in these entities. I basically inserted my own belief system into Liz and Colleen’s world. Colleen is careful to explain to Liz the difference between guardian spirits—Colleen is a guardian spirit—and ghosts. Ghosts are lingering spirits who for one reason or another haven’t crossed over to the next life. Guardian spirits, on the other hand, have passed on, and been trained and sent back with a mission. Yes, I carefully planned the limits of what she can and can’t do. I don’t ever want Colleen to solve Liz’s cases for her. That would make Liz’s job far too easy.

Does Southern gentility make families more dysfunctional than in the north where it is lacking?

Laughing here. I think there are both functional and dysfunctional families everywhere. And I think there are both people with manners and those sadly lacking them all over. The thing that’s perhaps not uniquely Southern, but it’s certainly common here, is our need to put a good face on things—to avoid unpleasantry whenever possible, sometimes by extraordinary and comical means.

Is your main character, Liz, related to Kendel Lynn’s main character, Elliott Lisbon? Both women seem to obsess about germs on their hands! (Better fess up now because I’m going to ask Kendel the same question.) 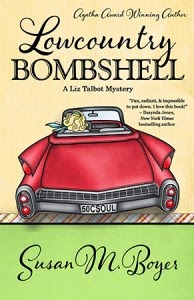 Ha! No, Liz has never met Elli, though I know they’d like each other. If they’re related, I’ve never come across the evidence of it. Liz gets her obsession with germs from me. I confess, I’m a card-carrying germophobe. That said, Kendel will whip out her hand sanitizer just as fast as I whip out mine.

Yes, she’s taken Tae Kwon Do lessons and is considering Krav Maga. Her daddy taught her to shoot, but she’s also had lessons at the gun range, and goes in for target practice regularly.

What’s next for Liz, Colleen, and Nate?

LOWCOUNTRY BORDELLO releases in November. There’s a lot going on in that book, and it takes place during the Christmas season.
Posted by E. B. Davis at 12:00 AM

Hey Susan, welcome back to WWK.

My (much) better half has read the book and thoroughly enjoyed it. No better recommendation can I make.

It sounds like you have created a consistent environment and setting including what can and connote be done with psychic powers. I think that is especially necessary with a heroine who has psychic abilities.

Elaine, thanks for having me on WWK today! You ask great questions. Jim, thank you. :) Your better half is a godsend.

Thank you, Warren! I've tried to kep the parameters of what Colleen can and cannot do consistent, and also make sure Liz is the one doing the work of solving the mystery.


I can't wait to read this book, Susan, since I loved your other ones. I hope you'll be a Malice so I can get it there and have you sign it.

I've read already and I honestly think it is the best one yet!

Hey, Gloria! Thank you so much! I absolutely will be at Malice and I would be honored to sign a copy for you. Looking forward to seeing you!

Thank you so much, Rowe!!

I enjoyed your missing person's case, Susan. Well done, and of course Liz's personal relationship, too. But best of all--the supernatural element that I love! Great combination. Thanks for the interview.

Thank you, Elaine! It was a fun interview to do!

Great series, Susan. Thanks for filling us in on some of the details that go into it!