Gazing Into My Occluded Ball

Everyone seems to have a crystal ball or two into which they find undistorted visions of the future. My prognostications have always suffered because of the occluded ball I was handed at birth. I eschew black and white answers, seeing instead myriad shades of gray. Have I equivocated sufficiently to now introduce the subject of this blog? 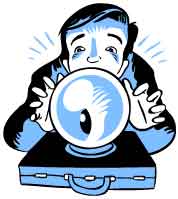 A numbers guy looks at the future of publishing.

I wrote a couple of posts last year that touch on this subject: The Harsh Economics of Agent Love and Career Risk and Self-Publishing, but since then Borders entered Chapter 11 Bankruptcy and Barry Eisler turned down a half-million bucks from St. Martin’s Press for a two-book deal in order to self-publish. He and Joe Konrath talked about it on Joe’s Blog.

Since I’m an author, I am most interested in how to take the content I produce, get it to the consumer (i.e. reader) and be paid. Others in the business have different concerns. To foresee the future we need to understand the past, so let’s start with the traditional publishing model.

Before online shopping the only way you could buy a book was at a bookstore or by mail order (usually through book clubs). After online shopping, each bookstore needed to figure out how to induce customers to shop in person for something they could buy less expensively online. That pushed most bookstores toward a value-added business model. Indie bookstores tried to earn their keep by knowing their customers or successfully developing a particular niche. Big box bookstores developed a proposition based on massive inventory, and (perhaps) lower prices. Walmart, etc. chose high volume on a few titles and everyday low low prices. Grocery stores, airport kiosks, etc. base their value proposition on convenience.

Publishers traditionally paid authors a certain amount for each book sold. Didn’t matter who sold it; didn’t matter who bought it, as long as it was new. Authors liked bookstores because they provided opportunities for consumers to purchase their product. They liked Amazon and other online retailers because they also sold books. Most authors don’t like Walmart because they aren’t represented in the limited titles they carry.

Publishers were the venture capitalists for an authorial business. They funded a lot of authors with advances that never paid out. Sometimes they struck a gusher and made huge profits. Occasionally they nurtured an author into a self-sustaining business whereby repeat sales were guaranteed.

In addition to being the venture capitalist for authors, publishers are in the manufacturing business, producing bound copies of ink on paper. Because of the multitudinous distribution channels, publishers printed lots of copies of a book, got them into stores (using distributors) and took them back if they didn’t sell (which they sold for pennies on the dollar to remainder companies who then stocked them on the bargain shelves in the same bookstores who had just returned them).

Before the internet, the system worked (albeit not the most efficiently). Along the product chain from author’s scribblings to the book in the reader’s hands all the tasks were divvied up in a fairly stable manner with little overlap. Many publishers had readers go through the slush piles of proffered manuscripts to find candidates for publication. Publishers also provided editors, copy editors, cover designers, marketing strategy, placement fees for bookstores, etc.

Online retailers, led by Amazon, provided readers with a mechanism to purchase books at a discount and have delivery in a few days. Bookstores still provided immediate gratification, and physical browsing, but the pressure on their model increased exponentially.

That in turn caused pressures on the publishers. Many people blame the “bean-counters” and “corporate raiders” for turning publishers from benign entities who nurtured authors to profit-driven mega corporations. While finance staffs implemented the changes, we need to look into the mirror for the real change agents. Yes, folks, we—the purchasers of books—caused the changes. What we buy and how we choose to buy it drives the whole business, not the other way around. For example, big box bookstores did not drive out the independent bookstores. We who purchased books from big mall bookstores drove out the independent bookstores.

All of which brings me to my occluded ball. Even though I personally prefer having a book in my hand, I have concluded that consumers’ preference for their Kindles, Nooks and other electronic readers over printed material are driving and will drive massive changes in the publishing industry.

Next week’s post contains my sense of the future of publishing and what that means for authors.

I reluctantly bought an ereader when my publisher put me in ebooks and I love the ease and convenience of buying ebooks. I read far less print books these days.

Nice to have you blogging again, JIm. I agree that consumers drive the marketplace and what cheapest sells most. I look forward for your forecast for the future.