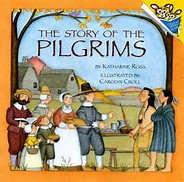 When I was teaching third grade in social studies I taught my classes about the Pilgrims coming to America. Years before I started teaching when my children were young I signed up for a children’s book club and we received a new book every month. One of those books was about their trip on the Mayflower and settling there. It was a simple book that could be read quickly, but I didn’t think it was enough to really let them know what the Pilgrims had to go through so after that book, I read to my students from a chapter book that started out in England before they went to Holland. Somewhere out in my garage where there are so many of the books I had in my classroom stored are those two books. 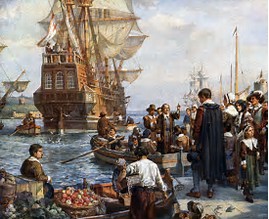 Before I started the books, I bought gray vinyl that looked like leather and then cut it to fit around pieces of white printing paper. Then I sewed it down the middle, folded it and wrote on each cover the name of one of the Pilgrim children who came over on the Mayflower and lived through the first year. I passed them out to my students to write in as if it was the journal of that child they were assigned to. They wrote as if they were writing to their Aunt Patience and turned it in at the end of the day. I responded to their entries as Aunt Patience with thou and thee in my replies sometimes scolding a little girl who took off her shoes and stockings to wade in the river, etc. The first year I did this I gave the journals of two Pilgrim brothers who almost blew up the ship with gunpowder to two of my brighter students, a girl and a boy, with great imaginations because I looked forward to reading what they would come up with. They were ornery boys who came on the Mayflower whose last name I think was something like Billington, but I may be wrong. 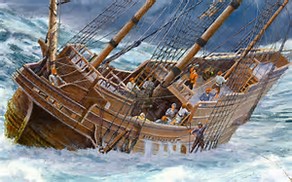 As I read about that horrible trip coming across the ocean with so many packed into the hold and the storms that tossed the boat, and people getting sick from it, I sat on a table in front of the room and had each child sit on their desk, and we swayed back and forth as if we were in the hold of the Mayflower. Some even pretended they were barfing. I told them what it would be like down below and the fact they used chamber pots, etc. and often the biscuits and food they had brought would get wet when the waves swept overboard and came down below. 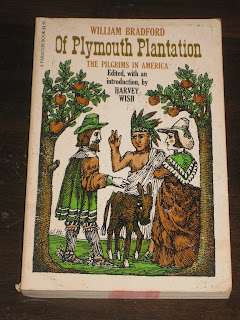 On my own and not to the students I read William Bradford’s Of Plymouth Plantation, The Pilgrims in America edited by Harvey Wish. How interesting that story was of their time in England, and then moving to Holland and coming back to England to take a ship to the new world. I loved his old spelling from that period. I was able to fill in some information that wasn’t in the book I was reading to them. Only two people died on the way over, one a cocky young man who was a worker on the Mayflower who hated the pilgrims and thought they should all be thrown overboard. But he got sick, died and was thrown overboard. Later another one who was the servant of one of the wealthier passengers who got sick and died and was thrown overboard, too. 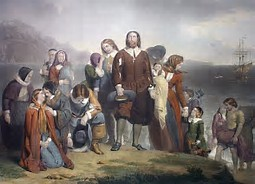 After the Pilgrims landed I continued to read about that first year in New England in Plymouth. Some of their parents died, and they would write out sad they were or maybe the next day they would write as if they were having fun. They wrote about Squanto, and the other Native Indians. Some of what they wrote was touching, some funny, and some quite interesting. Of course, I didn’t save those journals when we were finished with the subject, but I wish I could have.


One time at a parent teacher conference a parent told me she’d heard my son had come over on the Mayflower. My son, John Alden, had written his name on the inside cover of the book we’d got from the book-of-the month club. Needless to say, we had a good laugh over that. My husband and children are descendants of John Alden and Priscilla Mullen’s 2nd son. 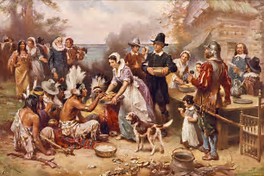 One summer when I went camping with two of my sisters in New England, we stopped in Plymouth and got to go onboard the replica of the Mayflower. How those people survived that long trip with only two dying, is beyond my imagination how more could have survived such a trip.


After we visited the Mayflower we went to the reenactment village of Plymouth, something we really enjoyed. We talked to Priscilla Alden in the house she and her husband lived in as she worked on a spinning wheel. I asked her where her husband John Alden was, and she said that he was out in the field scything hay for the winter. 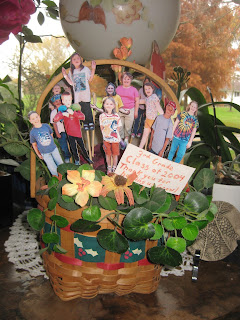 When I went to a graduation party of one of my former students, I took along a large binder full of classroom pictures. One of the parents who also came to this graduation party asked if she could take it home to show to her mother who had mentored me for six weeks before I got my diploma. Unfortunately, she never returned it so I took a picture of this gift given to me at the end of the school year when another mother had taken pictures of all my students and cut them out and put them in this basket. Over the years some of the students on wooden picks have fallen out or disappeared.


How much do you know of the Pilgrims coming to America?


Have you ever read William Bradford’s book or diary?

Email ThisBlogThis!Share to TwitterShare to FacebookShare to Pinterest
Labels: Teaching students about the Pilgrims.

I bet your students had a great time in your class.

Warren, they did and so did I.

I bet your students learned a whole lot more from you and your fun projects than they ever did from textbooks!

KM, I'm sure they did. When I was substituting after I retired and had to teach a lesson in Social Studies, something like this topic was usually no more than a page or two and that was all that was in the teacher's lesson plan for that. Sometimes they had students color pictures of the pilgrims or whatever topic they were working on. Another thing that bothered me if I happened to be subbing for 3rd grade is that almost no teacher had a chapter book they were reading to their students. A lot of third graders aren't into reading chapter books, but they still listen to the teacher reading a chapter or two a day and can't wait to hear more the next day. There were a few teachers who read to their students fortunately, but not many.

What a great teacher you were! I love these assignments.