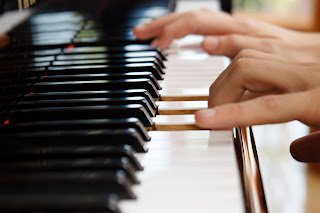 Pianists know they must practice every day, playing scales and various exercises that stretch the fingers and give them the flexibility and dexterity that they will need to play complicated compositions. Long ago, I read in one of Madeleine L'Engle's wonderful journals of life and writing about this need for writers.

“Nobody can teach creative writing–run like mad from anybody who thinks he can. But one can teach practices, like finger exercises on the piano; one can share the tools of the trade, and what one has gleaned from the great writers: it is the great writers themselves who do the teaching.” –A Circle of Quiet

For years now, I've created my own finger exercises, as well as borrowing from other writers who've written books about writing, and used them in my journals. I turn to these when I have only tiny stolen moments to write, such as while waiting for a doctor/mechanic/meeting, or when I find myself facing resistance on my current project, or when I've finished one thing and don't know what to work on next (this rarely happens to me anymore since I always have a long list of projects to tend to). Here are a few of the ones I've found most helpful.

Invent a character. I do this when in a public place, such as that doctor's office. Choose a stranger and invent an entire backstory, personality, name, and occupation for that person. If you have plenty of time, go on to put them in dialogue with someone.

Describe a person or a scene in detail using only metaphors.

Describe a scene through a character's consciousness, using all five senses but not one sense verb (“saw,” “smelled,” “heard,” “felt,” or “tasted”). Extend this by also omitting any pronoun referring to your viewpoint character (such as “he,” “him,” or “his”).

Write an action scene entirely in short, quick sentences to give a sense of a fast pace. Then, write it again in a few long, involved sentences so that the action builds in a reckless, headlong pace.

Write a paragraph or a scene entirely in simple, plain words that come from Anglo-Saxon (such as “walk,” “yearly,” “leaf”). Then, rewrite it entirely in Latinate words (such as “amble,” “annual,” or“foliage”), and notice the change in pace and tone.

Describe a landscape or the decoration of a room without using any color names.

Write a scene in dialogue between two people who want opposing things and who are hearing only what they want to hear and speaking to that, as if it had actually been said, instead of what the other person is saying.

Write a scene where one person in a marriage is afraid the other is having an affair while the other is actually afraid they have cancer and keeping their medical appointments secret. Each of them is trying to appear as if nothing is wrong and cannot tell the other what they're afraid of.

Describe yourself, using only specific objects or sayings and songs from your past. Do this now with a fictional character.

As you can see, I could go on and on with these writers' finger exercises, and I have through the years. They're a part of the way I keep my writing brain nimble and dexterous and develop my skills. I have used them in teaching creative writing classes, as well, and the students have found them helpful. Give them a try, and then invent your own.


Do you ever practice your writing, other than work on your current project?
Posted by Linda Rodriguez at 12:30 AM

What a wonderful use of time, and great suggestions, Linda! Something that must appeal to every writer in how to use those tiny chunks of non-productive time to keep stretching the creativity muscle. We have to talk about using all five senses but no sense verbs. That has me flummoxed. Intriguing post.

I will do writing exercises when I want to work on improving a particular area. I don't do daily exercises. I am never between projects, as I always have multiple going. I always have something I am writing new or revising, and I don't find all the time I need to do that without feeling pressure.

This, of course, says loads about me, and very little about the value these writing exercises might be if I actually did them!

Linda, I do so love this post and these exercises. These are good things to do--good ways to keep those writing muscles limber, so to speak. Sharing this for sure!

I send a daily morning email to my kids which is my writing warm-up: news from the political front in Ohio, the dogs, weather, the boring parentals have a life.

Juggling multiple projects right now: new writing in the morning and revisions in the afternoon.

Interesting! I think we'll try some of these at the YA book club at my daughter's school. They're wanting to start sharing some of their own work with each other, and simple practice exercises are a fun way to start. Thanks!

Thank you, Linda, for the exercises. Anyone who thinks writing is easy hasn't gone through what it takes to improve the skills needed to produce a good written piece. I'm still working on it.

These are great exercises. I forget that my imagination needs a workout, too--- and this kind of thing keeps writing fresh.

Kait, using all five senses without sense verbs is a exercise I often give students to teach about "show, don't tell." It helps put your mind in the space to show more vividly. "A siren's klaxon wailed in the distance" vs. "He heard a siren in the distance."

Great exercises - and suggestions for even the most reticent of writers

Jim, I use these for bits and pieces of time when I might not have a chance to work on the current project(s)--like you, I tend to have multiple. When i'm really under the gun and writing all day and into the evening to finish a book by deadline, these sometimes fall by the wayside, but I always pick them up again.

Thanks, Art! I'm glad you find them useful. They're especially helpful when I hit an area of resistance--good for getting me writing.

Margaret, I love the idea of a daily letter as warm-up. I've often dreamed of writing a daily "diary of daily life-type" blog that I could later publish as a book--rather like May Sarton of beloved memory. But I never seem to do it. :-( Sometimes, however, I do write a daily poem as warm-up for weeks at a time.

Tina, I think helping your daughter's book club begin writing is a fabulous idea! Yay, you!

Grace, I'm a firm believer in constantly working to learn my art and craft better, not only through exercises but also through reading and analyzing great writers and those who are great at one particular aspect. Life is short and art is long, as someone famous said (I can't remember who right now).

Carla, that's also why I write different kinds of things--to keep all the imaginative muscles exercised and not just a few of them.

Thanks, Debra! I have a huge trove of these that I've developed to use for myself over the years and in teaching. One nice thing about getting old is that you tend to collect useful things. ;-)

Linda, what wonderful suggestions for increasing our writing ability. Thank you, so much.

Thank you. You are a great teacher.

These exercises are fabulous! I just used the Anglo-Saxon v. Latinate exercise to get me back into writing a scene that had me stuck. Great tools for the writer's toolbox. Thank you for sharing them.

Following Margaret's idea of writing a daily morning email, I sometimes ask my protagonist to write me a letter telling me how she's feeling, what she's thinking about, what's going on, etc. I often hear surprising things.

Gloria, I'm so glad you found it helpful.

Thank you for your kind words, Warren. We miss you here in KC.

Shari, that's a particular favorite of mine. I find it so versatile, and it helps us remember how complex and flexible the English language, our primary tool, is.

Molly, I adore freewriting to go deeper into characters (as my students will tell you). I didn't put any freewriting into this list of exercises because I usually teach it as an elemental basic tool in the writer's kit.

I have to admit I often make up stories when I have to spend time waiting, but I'm usually the protagonist in them.

KM, I started this exercise with my youngest son when he was small (and very precocious). We would choose a person we saw as the car drove past and make up a name and a whole backstory for that character, often funny. (But never cruelly so.)