I’m entering the publishing business a step at a time. My first toe in the water was after Ant Farm successfully weathered the Kindle Scout process and Amazon (their Kindle Press group) agreed to publish the eBook. Rather than search for a publisher to produce a print version of the book, I decided to do it myself. I’ve documented that process previously as well as provided my analysis of why I use both CreateSpace (for Amazon sales) and IngramSpark (for all others).

When I took back the publishing rights to Bad Policy from Barking Rain Press, I used the paperback template I had prepared for Ant Farm with a few minor tweaks. I did have to produce eBooks for the first time, and since it had been out for three years, I chose to start by making it available for Kindle only. Why?

Kindle Only or ePub as well?

Living exclusively within the Kindle universe provides two major advantages: (1) The book is included in Kindle Unlimited and the Kindle Lending Library, (2) For a few days within each 90-day renewal period I can put the book on deep discount and still retain the 70% commission, (rather than the 35% commission Amazon usually pays on books priced under $2.99), or alternately, during those days I can offer it for free. The disadvantage is those people who prefer to read electronically using ePub files either don’t get the book or they need to figure out a way to read Kindle files on one of their devices.

While Bad Policy was under Barking Rain Press’s control, it earned over 80% of its royalties from Amazon. The rest came from Apple, Barnes & Noble, Kobo, and others. I gambled that I would balance those lost non-Kindle sales with the extra royalties from Kindle Unlimited.

It’s still early days, but so far Kindle Unlimited has provided 20% of my eBook royalties since I took over from Barking Rain Press. The first promotion I ran for the Kindle eBook met my expectations.

Fast forward to Doubtful Relations. My print strategy remains the same with a minor variation. I had read multiple discussions on the topic of whether white pages or cream pages were better. Everyone had opinions, both sides’ arguments had merit, and people seemed to be evenly split on the issue.

I constructed a Facebook poll to test the question; it also resulted in a 50/50 split on preference. I decided to print CreateSpace with white pages and IngramSpark with cream. When people buy directly from me at bookstore and other events, I’ll offer them a choice and find out what happens. Of course, those who buy on Amazon will get white; those from a bookstore or other online retailer will get cream. Who knows how this will turn out, but it costs me nothing to run the experiment. 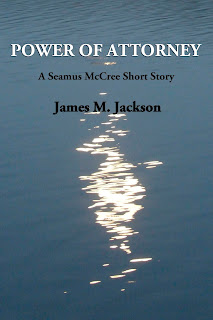 For the eBook, I chose the wide distribution approach rather than listing it only with Amazon. I figured most new readers would come to the republication of Bad Policy having read Ant Farm (Kindle only) or through a promotion targeted to Kindle readers. Doubtful Relations, however, follows Cabin Fever, which is available from Barking Rain Press in all formats. People who enjoyed Cabin Fever will likely prefer to read it in whatever format they chose previously (about 15% of eBook royalties weren’t from Amazon). I can change to a Kindle-only strategy sometime in the future to pick up Kindle Unlimited readers, but I don’t want to lose the Nook, Kobo, and iBook readers to the series.

As a special thank you, I’ll send anyone who orders Doubtful Relations by the end of August (and sends me evidence of their purchase) a free new Seamus McCree short story "Power of Attorney" you can read electronically (Kindle, ePub or PDF). You can conveniently find “buy” links to a variety of online retailers on http://jamesmjackson.com/Novels/doubtful-relations.html.
Posted by Jim Jackson at 12:00 AM

Excellent post, Jim. It's been a while since I've seen this topic revisited. Great information.

Thanks, Jim. We can count on you to do your research well, give considered opinions and share your insights with us.

This in addition to you writing a fantastic series!

Thanks Kait and KM -- You know the geek in me has to come out from time-to-time. I figure if I expose my thinking and share what I learned it can help others, and when I screw up someone can point it out so I don't keep doing the wrong thing.

I find this overwhelming, but will refer back to this column in the future. Thank you for a current overview of this aspect of publishing.

Margaret -- Welcome to the realities of Indy authors where you are now responsible for everything that publishers did for you (or to you, depending on your perspective!) Just another example of why many authors are better suited to staying with traditional publishers. All publishers have to stay nimble as rules change -- Indy authors can be more nimble, but they need to be aware and that takes away from writing and sales time.

Thanks for this, Jim. Like Margaret, I find it a bit overwhelming but I'm SO GLAD you're willing to share your experiences. It helps.

I am most unadventurous when it comes to my publications, although I did try a distributor for about a year who published all my books on all the platforms. I still yearned for control, and eventually put them all back into Amazon exclusivity. If I'm on the ball, which is rare, I will run a .99 or freebie. This usually jumps my sales as it did in the month of July and August. It takes a lot for me to be proactive on a monthly basis. I love your experimentation and your reports. We all gain from them.

I'll keep this one to guide me on my adventures into self-pub (am thinking hard about doing that for my next novel). Thanks for sharing, and best wishes for great sales on all your platforms. Marilyn (aka cj petterson)

Julie, Polly & Marilyn (aka c.j.) -- I've learned from those who went before me and hope to keep learning both from my experiments and from others'. And unlike in my fiction, these are not life and death decisions!

Jim, thanks for all the information. It will come in handy someday. You inspire me to try something different in my pursuit of publication.

Jim, I've never been sorry I went Indie. On the first several books in addition to Create Space and Kindle, I also went to Smashwords for B&N and other e-books, then I went to D2D. While I get checks for my print and digital books trough Amazon print and Amazon digital, I have yet to get a check from the other two, so on my last book I didn't put it up anywhere else. I always have my books in the back of my car and I sell them for only $10.00 from
there. I think you're wise doing what you're doing.

Jim, thanks so much for your generosity in sharing what you've learned. I'm in the first months of going Indie, and loving (almost!) every minute of it. But it's continual learning, and hearing stories like yours makes the way so much easier.

Gloria -- Selling print copies is a whole different ball of yarn. I also carry books with me wherever I go.

Hi Jim. Thanks for your thoughtful analysis. I hope you continue to keep us posted. I currently have all five books in my one and only mystery series on all platforms. And as of now, my sales on Amazon are only 65% of my total sales. Those Nook readers are exceptionally loyal! But I know I'm missing out on a potential KU audience. Loved the information. Congratulations on your success.

Cindy -- Those are excellent cross-platform sales. I am going to contact you off-list to learn how you do that.