Book Club in a Rut? Try the Bison Surprise.

Something old, something new, something fictional, something true.
This is the homey formula that guides reading selection for my book club, a group that has been together for over seven years. We're not the most organized group, but there is one thing we do well: eat. So that formula for book selection should probably add this step ....and don't forget to bring something delicious.
Like pairing a wine with a meal, finding the right combination of food and book for a night at book club is an art. Some novels easily inspire accompanying noshes, but others are a stretch. If you are looking for a book to inspire a literary potluck (and lively discussion) try out latest choice: American

Nations: A History of the Eleven Rival Regional Cultures of North America by Colin Woodard. The title is a mouthful, but it inspired one of the club’s best feasts yet.

For this, our "something true" nonfiction book, we gathered a potluck that was big, even by our standards. This book club feast almost beat The Great Downton Abbey Party of 2012.
There isn’t just one America, Woodard argues, but rather several Americas. The original North American colonies were settled by people from distinct regions of Great Britain, France, the Netherlands, and Spain. Each group had unique characteristics. Forget the fifty states. Woodard thinks the United States is actually comprised of eleven American nations. The mystery is how these American nations have stuck together in one grand experiment. The book is a thought- (and recipe-) provoking read.
Each member brought a dish inspired by their assigned "nation": Yankeedom, New France, First Nations, New Netherlands, Tidewater, Deep South, El Norte, Midlands, Borderlands, the Far West, and the Left Coast. We enjoyed dishes from the Far West's Cowboy Chili, to El Norte’s enchiladas, to Left Coast Kale Salad. Deb essayed pimiento cheese, a Southern specialty, and Karen brought a traditional French carrot salad. Barbara brought the cheese and rye bread favored by early settlers of New Netherlands. Borderlands girl Martha even brought her special recipe Dr. G’s moonshine. The lesson learned from the more traditional dishes is that early Americans were too busy working to worry about calories. Hearty was the word of the evening. 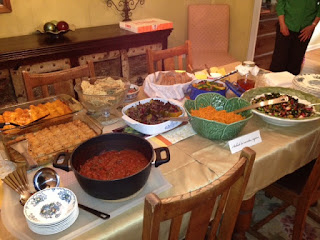 What region was I assigned? Yankeedom. What did I bring? That traditional New England specialty - a box of Dunkin Donuts. In my defense, Dunkin Donuts is modern New England cuisine. There’s one on every corner from New Haven to Bar Harbor. (If you invite me to dinner, I’ll be happy to bring something…but I probably won't make it myself. Except for my lemon cake. My lemon cake is amazing.)
If you’d like to try a dish inspired by Woodard’s book, try Janet’s First Nations Baked Stuffed Pumpkin. My daughter calls it Bison Surprise. Delicious, beautiful, and easy – just the thing for hungry readers.

Wash the pumpkin.  Cut out a lid and scrape out the seeds until the pumpkin cavity is clean.  Saute onion until softened, add ground meat.  Stir until meat is browned.  Stir in spices.  Remove from heat and stir in cranberries and nuts.  Mix in apples.  Bind with egg.  Spoon filling into pumpkin cavity and replace lid.  Set on a baking sheet and bake in a 350F oven about 1 ½ hours or until pumpkin is soft.  Slice and serve. Enjoy!
Posted by Shari Randall at 12:00 AM

I like the concept of your old, new, fictional and true for the book club selections. It keeps the group from getting in a rut.

I sympathize about bringing something to eat, however, I would probably find my selection in the nearest grocery store rather than at a Dunkin Donuts.

I tried one book club. To my disappointment, I found that over half the members had not read the book, couldn't discuss the book and wanted to gossip. So, I've stayed away from book clubs. I'm glad yours has been successful.

Woodward's concept seems interesting, but I must confess, I don't read much nonfiction unless it is writing related. So many books, so little time.

I made pumpkin soup one time. I served it in scooped out small pumpkins. It looked appetizing, and since I'd been too liberal with the brandy, it turned out to be quite a fun dish. All my guests loved it.

Hi Jim, Yes, having a guiding formula that requires different kinds of books helps shake things up (though I'd be happy with a mystery at every meeting). Reading outside the comfort zone keeps fresh ideas coming.

EB, you'll have to post your recipe for pumpkin soup. Nothing wrong with a little brandy! And I'll confess I don't read much nonfiction. Occasionally I'll read a good one - like American Nations - and be blown away by the way a good writer makes history or science or medicine into a page turner.

Yum, Your group sounds more serious than most.Book groups are great for authors to speak at.

I belong to two book clubs, one quite serious and the other where reading is optional. The serious one takes a vote of the members who have read the book to evaluate the book's popularity. A leader, one chosen for each book, sends out questions in advance for discussion. Also, a refreshments person is designated for each meeting. For the reading optional book club, we meet at a bookstore, talk about books and other matters,then adjourn to go out to eat. Both clubs have been satisfying experiences and have invited authors to meetings.

Warren, thanks for reminding me. I'll need some advice. My book club wants to discuss my short story (and the anthology it appears in) at the next meeting. A first for me to be the author at a meeting! I hope folks will share advice for speaking to a book club.

Paula, hi! It sounds like you have two good groups. It's important for people to get what they want out of the book club experience. I like both your approaches, especially since going out to eat is involved.

Like Paula, I belong to two book clubs, too, and both have been satisfying. The first one meets at a restaurant at 11:00 a.m. in the bar area where no one is at that time of the morning. We pick our books for the following year in December at our Christmas meeting in someone's home. We try to pick a mixture of books, too, especially since one member prefers non-fiction. One of the members sends discussion questions in advance if they're available. Most of the members read the book or as much as they have time to get read.

In the second book club, one member picks the book for the following month and then hosts the meeting either in their own home with dinner or if they don't feel they can have it at their house they pick a restaurant where we can meet and members buy their own meal. Wine is always served no matter where we meet. Most of the people in this book club read the book, too, but not always. I have to admit, if I really don't like the books picked, I might not read the whole book, but mostly I try to finish every one picked so I can join in the discussion.

One of the things - besides making new friends - I like about book clubs is that books are often picked I never heard of or might not have read if I had heard of it, and I've more often than not found I enjoyed the book. Even more I like the additional insight I get on the book from other readers views - something I might not have noticed when reading it.

I am impressed by the people with more than one book club - I have a hard time with just one. There is another kind of book club that I've heard of: the BYOB (bring your own book). Members will take a book they have enjoyed and each member gives a mini presentation to the group about their pick. No pressure, and you can get an introduction to a new author or series that way.

I have a fun book club, but boy do we disagree on books! We DON'T disagree on food though.

My only experience with a book club was the kind with people who would rather gossip - and they all knew each other.

However, I have a great experience with food! Love cooking and I think I'll use this recipe with Acorn squash and cut it for two eaters. Yum. Sounds good!