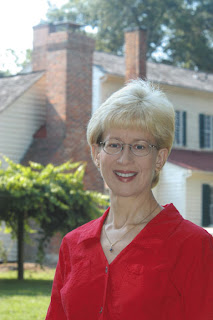 An Interview with Suzanne Adair

1.  Your novels are notable for the accuracy of the period of history they are based upon. How important is that? and how do you do it?

Period accuracy is extremely important, Warren. One goal of historical fiction authors is to transport readers into the past and allow them to vicariously partake of experiences that happened long ago. Inaccuracies destroy the story’s spell. That’s probably why readers who are history buffs or are in history-related careers feel that reading inaccurate historical fiction wastes their time.

I read a lot of primary and secondary research material about the American Revolution and the periods around it. My research is never-ending. But I realized early on that just reading about the war wouldn’t suffice at helping me figure out what people who’d lived more than 225 years ago had experienced and how they reacted to it. I’m a woman of the 21st century. I have access to electricity, safe drinking water, instant communication, powerful medications, and a bunch of other things that people living during the war didn’t have. Danger and scarcity shaped their decisions. How could I capture 18th-century sensory impressions and mindsets?

The wrong way to create characters for these stories would be to dress 21st-century Americans in 18th-century clothing and drop them into a novel. Georgian-era people lived in a different culture, and that gave rise to different priorities, logical processes, values, and so forth. What provided me with tremendous insight into an 18th-century America that didn’t have electricity or antibiotics was becoming a Revolutionary War reenactor.

Revolutionary War reenacting puts me right in the midst of the sights, smells, sounds, tastes, and textures that someone back then would have experienced. Those sensory impressions and reactions inform my writing.

2.  Your relevant history blog describes historical events in readable and interesting ways. Your blog has readers from all over the globe. Where do you find writers who provide such interesting content?

In 2010, I queried my readers about what they’d like to see on my blog and learned that their enjoyment of history wasn’t confined to just the period of the American Revolution. Essentially, if I could feature the fun, fascinating bits of history—what was deleted from high school class—my readers would love it.

However I couldn’t possibly write fast enough to keep up with their hunger for history. Fortunately there’s a lot of historical fiction and non-fiction out there. Most of the authors writing it don’t get enough exposure. (I meet these authors through my historical research, author activities, and online discussion groups.) So I decided that I’d create a feature for my blog and spotlight those authors in that feature.

Humans don’t learn from their history mistakes. Have you noticed that one of the first items to be given the boot when budgets are cut is history—as if history is unimportant? So I also decided to show why the past is relevant. Thus was born “Relevant History” in early 2011.

3.  How can readers find out more about you and your writing?

Thanks for the review and interview, Warren!

Bio:
Award-winning novelist Suzanne Adair is a Florida native who lives in a two hundred-year-old city at the edge of the North Carolina Piedmont, named for an English explorer who was beheaded. Her suspense and thrillers transport readers to the Southern theater of the Revolutionary War, where she brings historic towns, battles, and people to life. She fuels her creativity with Revolutionary War reenacting and visits to historic sites. When she’s not writing, she enjoys cooking, dancing, hiking, and spending time with her family. A Hostage to Heritage, her second Michael Stoddard American Revolution thriller, was released April 2013.

Book description:
A boy kidnapped for ransom. And a madman who didn't bargain on Michael Stoddard's tenacity.

Spring 1781. The American Revolution enters its seventh grueling year. In Wilmington, North Carolina, redcoat investigator Lieutenant Michael Stoddard expects to round up two miscreants before Lord Cornwallis's army arrives for supplies. But his quarries' trail crosses with that of a criminal who has abducted a high-profile English heir. Michael's efforts to track down the boy plunge him into a twilight of terror from radical insurrectionists, whiskey smugglers, and snarled secrets out of his own past in Yorkshire. 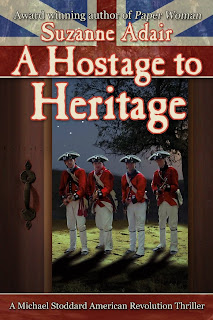 Lt. Michael Stoddard of his majesty’s eighty-second regiment first appears in the book riding his horse, Cleopatra, in pursuit of two rebels.  He fails to catch them resulting in one of the many frustrating tasks Stoddard is ordered to complete.  A ten-year-old boy from a noble family is abducted. Stoddard knows that if he cannot recover the child, safe and sound, he has no friends among the gentry and no financial resources to cushion the blow that failure will inevitably cause.  He could be discharged from the army and it is impossible to live on the tiny pension he would receive. His investigations are complicated by the fact that in North Carolina the war for American independence is not going well for the British.  Individual alliances are unclear. The war is used as an excuse by both loyalists and rebels to settle old scores.
Stoddard has to suss out who is lying and who is telling at least part of the truth.  Enemies from his past appear and disappear unexpectedly.  Motives become entangled with emotions, personal, family and even national histories.  Even those closest to Stoddard have secrets that have to be unraveled before he can save the child and thereby save himself.
This is another excellent book set against the background of the southern
conflicts of the American Revolution by Suzanne Adair.  I really enjoyed it.

Warren, a timely topic for me as I went to a meeting last night to oppose the closing of the Mountain Gateway Museum in the NC foothills. History is essential to understanding the present. IMHO. I applaud the author for her excellent well-researched novels. She sets a high bar for the competition.

Liz, nice to see your here today. Thanks again for your support!

Georgia, thanks for stopping by,and for your kudos. Horrid, isn't it, all the proposed closings of historical sites in NC? Closer to me than the museum in the foothills but also on the chopping block is the Revolutionary War battle site called House in the Horseshoe. Surely the people who are trying to push through all these closings don't grasp the importance of history.

I still have to get CAMP FOLLOWER, but I thoroughly enjoyed the your first two books in that series and look forward to reading the new ones, too.

I agree with you about history, Suzanne. Because the text books at 3rd grade level were so pathetic, I always did a lot of research and built whole units about different periods of history including the early colonists which included reading relevant children's books and having them take on the persona of one of the children who came over on the Mayflower and lived the first year. I read the fictional diaries of children and Margaret Pumphrey's tales and had my students keep journals in fake leather bound books I made as if they were Francis or John Billington and other children of that era. I, as Aunt Patience, wrote back to them in the vernacular of the day - I read all of William Bradford's journals, and it wasn't long before they tried to write the same way. As they were coming over on the Mayflower, we'd sit on our desks and toss and turn with the storms. I told them the horrors of being trapped down in the hold, etc. They recounted their stories settling into their new homes sometimes expressing sorrow when a parent died, etc. It took weeks, even a month for this unit, but was so much better than one or two pages in a text book.

A final note, one of my former students is now a full tiem reenactor at Williamsburg. I hope to get down to see him someday.

Gloria, that's such a great story. Thanks for sharing it. No wonder your former student is living the history in Colonial Williamsburg. Both my sons were raised in the reenactment environment. They both enjoy history from all time periods today because they received hands-on history every weekend that we went to an event. I wish I'd had a history teacher like you!

Actually, Suzanne, I got in trouble with one of my principals over this because what I was teaching wasn't part of the curriculum for 3rd grade social studies. Fortunately, she was gone the next year and that principal in reading about the problem suggested that I put what I was teaching under reading. So that solved that problem.

The very thing that I realized quickly reading PAPER WOMAN was the excellent research and how much I could learn by reading anything written by Suzanne Adair.

One of the things I enjoy most about all the books is the fact that none of the female characters are the simpering idiots that so many authors want us to think women in the 1780s were, yet they aren't 21st century feminists hiding in homespun and lace kerchiefs. It's also great to get information on the southern theater of the Revolution, since it sure wasn't taught to us when I went to school.

Well-done historic fiction is always a pleasure. It can transport me to another time and place so completely that I'm surprised to look up and see that I'm still in the 21st century.

Gloria, as you've demonstrated, there are usually ways to get around the boneheads. How long did it take the books you'd suggested to be accepted as "legit" reading for the curriculum?

One of the things I enjoy most about all the books is the fact that none of the female characters are the simpering idiots that so many authors want us to think women in the 1780s were, yet they aren't 21st century feminists hiding in homespun and lace kerchiefs.

Thank you, Linda! Women during the Revolution couldn't afford to be fragile damsels. They'd have died. Instead, they exhibited the innate strengths that women throughout history have possessed. These strengths didn't arise from any particular cultural/social movement.

The misconceptions and lack of history knowledge in readers and reviewers play a role in how female historical fiction characters are received. Several reviewers for Paper Woman said that a respectable woman during that time wouldn't have run a printing press, as Sophie does. You have to wonder where they're getting their information. When the men went off to war, women assumed operation of family businesses and farms because they had to do so to stay alive -- but also because they had the innate strength to do so.

KM, that's a goal of historical fiction authors. Create that time machine. :-) Thanks for stopping by.

Suzanne, I too love your authentic characters. And Gloria, I'm fascinated by your teaching. That reminds me of a 7th grade teacher who told us to write a newspaper article that might appear in a British newspaper during the revolution. I really felt disloyal as I described sneaky colonists shooting from cover instead of marching forward properly - but the teacher complimented me. (I think I was the only one who took the British side.)

Hah, Norma, now you see why my sons and I have reenacted on the British side all these years!