What Makes a Book Good?


We are enjoying the company of our grandchildren. Each summer they visit us for a week or so without their parents. Lola, who will be nine about the time school starts, and I were talking about books. She’s a reader, and I abet her by giving her lots of books for Christmas. She started our conversation on this topic by exclaiming, “This is such a good book. It’s only the second chapter and already something really bad has happened.” 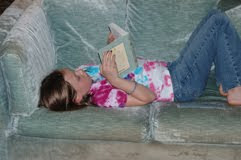 Aha, I thought, a chance to learn what makes a book good from a nascent reader—Lola hasn’t yet had a teacher like Mrs. Zarroli who Ramona talked about on Friday to learn from, so hers is an unadulterated experience. I asked Lola a bunch of questions and here’s what she said.

What’s a good beginning? I like bad things to happen at the beginning, even if I don’t understand them. And a good book has to have a mystery.

What makes interesting characters? The people in the book have to take risks. They have to be sneaky and stuff like that. In this book they had to break into the principal’s office. They take on a lot of stuff that we do not. If something goes wrong then something really bad is going to happen to them.

There is a pair of sisters that are so unalike. One is grouchy and the other is very nice. One likes fairy tales and the other doesn’t. Sometimes one is nice and sometimes the other isn’t. But they have to do stuff together. A good character in my opinion is brave and smart; they can trust people; they can take a lot of risk. If they’re funny that’s good too.

And I don’t like it when (for example) Sabrina magically pulled out of her pants pocket a whistle called the wind and blew away the problem.

What makes a good book’s ending? Usually it ends well, but sometimes the best books don’t end well and that can be good too.

There you have it from an eight-year old. We don’t need to graduate from high school, be an English Lit major in college or earn an MFA degree. Kids know good stories when they hear or read one: You need a good early hook and there has to be a mystery. You need interesting characters; they can’t be all alike and there has to be conflict. The characters need to be larger than life and take risks—risks that we wouldn’t normally take.

The plot has to make sense. Deus ex machina is a big no-no, and the ending can be either a good thing or a bad thing as long as it’s satisfying.

What’s so hard about that?

Young Lola could teach writing workshops. Her comments are terrific.

That was great. She covered all the points. You may have a future writer on your hands.

Lola is a writer, although she thinks of herself as more of an artist because she illustrates her stories and prefers to verbalize her stories rather than to write them. (Who can blame her when she's at an age where her verbal vocabulary far exceeds her spelling vocabulary.)

The only question is what she'll choose to do with her talents. It will be fun to watch them mature.

Absolutely loved your granddaughter's comments, Jim. Makes me want to start some of my books over. What a smart young lady.

As a former school librarian, I really appreciate this post.

Lola has positively nailed it. I think I need her help on my WIP.