THE DEATH OF MRS. CLAUS 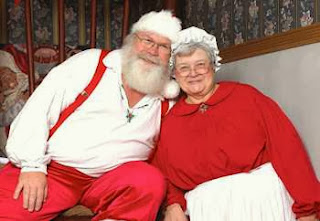 “No, Eddie, you can’t have any of these cookies,” Edith Marble said as she carefully placed the decorated Santa cookies in a plastic container putting wax paper between each layer. She reached up and pushed a wisp of gray hair out of her eyes. “They’re for Sarah’s Christmas Open House tonight, although why she’s having it this early with Thanksgiving only just over a few days ago is beyond me. Next thing you know she’ll be having it before Thanksgiving,” Edith grumbled. After just putting on a big Thanksgiving dinner for her family as well as her brother and his whole family, Edith didn’t feel like making Santa cookies with leftovers from Thanksgiving still in her refrigerator.
Eddie, her black, tan and white border collie beagle mix, sat on the floor beside her eagerly waiting for a bit of cookie. His brown eyes followed her hand and when she set aside a cookie with the corner broken off, he gave a little yip to remind her he was there, but she ignored his pleas although she continued to talk to him. He was her companion, after all, and living alone as she did, he’d become her confidant. As soon as she put the lid on the plastic container, she broke off a piece of the imperfect cookie and gave it to him. “That’s all you get, Eddie. You’re starting to put on a little weight and that’s not good for you.”
She put on her boots and a heavy coat, hat and gloves as Eddie waited eagerly at the door ready for his walk. “No, Eddie. Not today. Maybe later, but I have to deliver these cookies to Sarah Clauson first. There’s no way you can go into her house and you can’t stay in the car. Who knows how long I’ll be if she wants to show me all her decorations both inside and out.”
When Edith arrived at Sarah Clauson’s home at the end of a short cul-de-sac, a neighbor was using a snow blower to clean the circle in front of the Clauson home. She stopped and waited for him to finish in front of their drive, but he turned off the blower before moving it out of the way.  She rolled her window down and called out. “Hi, Mr. Jones. It’s nice that you take care of the end of your road. I imagine the snow really builds up sometimes.”
He nodded and shouted to her from where he stood. “Snow doesn’t build up much with the traffic coming in and out over the Christmas season because of all the decorations my damn neighbors put up every year. I hate it. I’ve complained to the township trustees, but do they do anything about it? Hell, no!”
“I imagine it could be annoying,” she shouted back, “but it’s only for a short while each year.”
“Hmph,” he grunted as he walked over to her car. “It gets earlier and earlier every year. They started decorating before Thanksgiving. Actually, I think it was right after Halloween. Disgusting! Harriet and I have to keep our blinds pulled to keep the blinking lights from coming in the windows.”
“I don’t think I’d like that, either,” she said, commiserating with him.
“You wouldn’t.” Even with his hat that covered his head and most of his face, she could see his scowl. “But that’s not even as bad as the music. Makes me hate all Christmas songs. If I hear one more time Here Comes Santa Claus, I think I’d shoot him if he ever really did show up. So why are you here, Edith?”
She smiled at him hoping he wouldn’t take his anger out on her. “I’m bringing Christmas cookies for the Clauson’s open house tonight.”
“That’s tonight, huh?” He groaned and threw up his hands. “Hordes and hordes of more people and my driveway will probably be blocked like usual. It’s just too much. How can a neighbor put up with all this?” He waved his hand at the Clauson home, shook his head and went back to plowing the rest of the circle so Edith could get in the Clauson driveway.
Several tire tracks in the drive showed others had already been in and out since the snow started falling last night. She pulled up to the garage and carried the container of cookies carefully to the side door of the garage and went in. The car was gone so Carl must have gone somewhere, she thought. A yellow cat came up to her meowing piteously.
“Rudolph, what are you doing out here? Poor kitty did you slip out when Carl left?”
She knocked on the door leading into the house, waited a while and then knocked again. When Sarah didn’t come, Edith tried the door. It was open so she walked in and up the two steps leading to the kitchen with the cat following.
“Sarah,” she called out. I’ve brought the cookies I promised.”  She looked around the kitchen. There were Christmas decorations everywhere, and most were of Santa Claus. She called out again. “Sarah! It’s Edith. I’m here with the cookies.” When there was still no answer, she set the container on the kitchen counter and went into the dining room. Light from the windows showed more Santa Clauses everywhere around the room and a table centerpiece with Santa and his sleigh and reindeer. “Sarah?” she called again. Trepidation filled her as she started wandering through a house filled with Santa paraphernalia and even a life sized Santa which spooked her when she walked into the hall leading to the bedrooms.

The call came from Sheriff Braddock later that afternoon. “We arrested the son-in-law,” he said.
Edith could hear the little smile in his voice. “Did he admit to it?”
“Not at first, but the sales receipts showed the day before so this was all premeditated.”
“So he was the one who put the ad on Craig’s List and waited for the right person to go for the bait,” she said.
“Uh huh. Said he already told several people before Carl called that it was sold.”
“Carl didn’t recognize the voice? I suppose he disguised it.”
“Right. We found the Belsnickles in large plastic crates in his garage,” Sheriff Braddock said.
“That was dumb. I supposed he was going to remove them before long,” she said.
“He actually had an antique dealer in another town willing to buy them. He gave us the name, but I’m not sure we can get the dealer for anything. It’s Alex’s word against his.”
“Did he say why he did this?”
“Gambling debts. Also, he seemed to think Mrs. Clauson would have gone with her husband.”
“How sad. Poor Nancy. Poor Carl. All for a gambling addiction.” Edith’s heart ached for them.
“Yeah. Oh, by the way, Mrs. Marble. Thank you.”
Edith hung up with a smile. She was glad she was able to help, not that she doubted her sleuthing skills since she’d done it before. She looked down at Eddie. “After all if Miss Marple could do it, Eddie, I can solve crimes, too.”

I love your disclaimer, Gloria. It may have worried readers if you hadn't added it at the end. And the liability issues, panic in the elementary schools...no, your disclaimer solved those problems and put everyone's worry to rest. Thanks! Loved your story. Elaine

What a delightful and timely story, Gloria. Thanks for such a terrific Christmas gift. Also, congratulations on the publication of your third Catherine Jewell mystery. Best wishes for continued success with your series.

Thanks, Elaine. I didn't really think kids would read it, but just in case. :-)

Thank you, Paula. Now it's starting all over with a new book. I've been taking a bit of a breather before actually starting it although I do have the plot idea.

Great story, and I appreciated your disclaimer at the bottom. I enjoyed it!

I just finished reading the short stories in The Killer Wore Cranberry (I won the copy this site was giving away) I was reading one a day, and was thinking I would miss them. This one filled in perfectly!

KM, I'm glad you enjoyed the story. It's the third of written using this protagonist, Edith Marble. Keep reading a new one every week until the first full week of January when we go back to blogging.

Thank you, Carol, and Merry Christmas to you, too.

Thank you, Pat. I'm glad you liked it.

Hi Gloria, Just had time today to sit down and enjoy your story! I loved Miss Marble/Marple - hope to see more stories about her.

Shari, actually this is the third one I've written with her. None of the others are published yet, but someday I may have enough stories about her to put up an anthology entitled "Edith Marble Investigates." The first stories were written for the Al Blanchard Crimebake contests.

I enjoyed your holiday story, Gloria and the disclaimer. Also, congratulations on publishing your third Catherine Jewell book! It's on my holiday wish list.

Thank you, Kara. I'm glad you liked the disclaimer. :-) I also hope you enjoy LADIES OF THE GARDEN CLUB.

Sob! Well-told story . . . and thanks for final reassurance of Mrs. Claus. Merry Christmas!