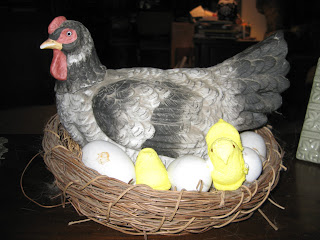 In a few days it will be Easter, a holiday filled with joy for the religious meaning, because it’s finally spring, and for youngsters, who look forward to the Easter Bunny and candy. For my family it means getting together for dinner after church. There’s always a ham, colored eggs, sweet potatoes, and dishes and desserts others contribute. This year it will be at my house.

When my grand kids, nieces and nephews were younger, I made up an Easter egg hunt with teams, who had to look for plastic eggs with clues in them. There would be the purple and pink team, the green and yellow team, and the orange and blue team. Each team was given an egg in their colors with the first clue leading them to the egg with the next clue. The clues were riddles leading them all over my small farm – the hay mow, an old unused outhouse, in the reeds by the pond, and on and on until the winning team found a basket of candy hiding in the house – maybe in my clothes dryer. Teams with tiny participants unable to read were allowed to have adults help them. It took me a long time to write the riddles and distribute them the day before Easter, but the kids – and adults who participated – loved it. Now they’re all too old for that. 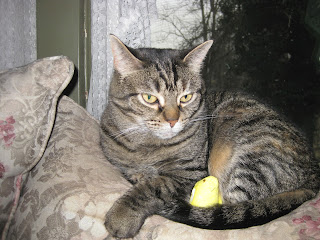 This year it is the 60th anniversary of Peeps, those little yellow sugary confections considered “THE candy of Easter.” Not for me, though. I much prefer chocolate; rabbits, eggs, chickens, anything chocolate to those marshmallow type chicks.

Peeps are made at Just Born factory in Bethlehem, Pa., and they hatch 5 million Peeps a day this time of the year. Not only do they appear in most Easter baskets, it seems they have developed a Peeps pop art culture with people making dioramas with them and other types of Peep art. Some people even use them in cooking, even in not to be believed dishes like sushi. According to Ross Born, the third-generation operator of Just Born, Inc., It’s the “Peepsonality” of consumers who not only eat them, but also play around with them.

At my Third Thursday book club, I took in the Peeps I didn't use for my pictures. There was a lively discussion on whether or not they liked Peeps.  Linda Bailey liked them, but only if they were stale and rather hard. Some remembered roasting them like marshmallows over a fire. Maybe I'd like them if they were roasted, but I won't find out because there were no Peeps left when the book club was over. 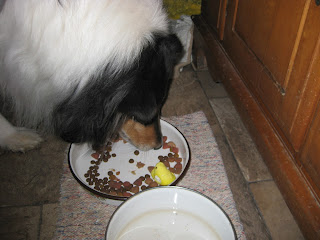 Carla Damron thinks Peeps are evil. She says "They are a demonic plot. Notice how they have infiltrated every holiday. Soon, I believe they may take over the world!!" To prove her point she sent me several pictures she considered harassment by her friends because of her antipathy for Peeps. Last year when she came to her office, she found it taken over by 'Occu-peep Columbia.' Peeps were everywhere in various poses and costumes. She sent me several pictures of this occupation. So I think she may be right. She also told me one year her husband gave her Peeps and a hammer. She claims even a hammer won't destroy the little buggers. 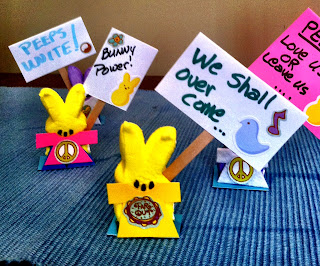 Hmmm. So that got me to thinking. Maybe I’ll decorate the top of my sweet potato casserole on Easter with them. Or better yet, maybe I’ll just plot a murder with them – only on the page, of course. Poison could be injected in them. Of course, one would have to make sure only the one it was intended for would eat the Peep. That means there could not be any kids around. That’s easy enough for a writer to do. Kaye George in her book CHOKE had a victim choked with a sausage. It could be done with Peeps, too, I imagine.

But for now, I’ll put all thoughts of murder aside to concentrate on the beauty and joy of Easter and its true meaning, and just how I’m ever going to get my house in order before everyone arrives for Easter dinner.

Besides eating Peeps in their natural state, how would you eat them?

Or what kind of art would you make from them?
Posted by Gloria Alden at 12:00 AM

Gloria, so glad you have showcased Carla's great preoccupation. For so long, I know she's felt like a voice in the wilderness, warning us about Peeps. Maybe you and she could collaborate on a novel where Peeps are used as the murder weapon! Happy Easter.

I actually liked Palm Sunday better than Easter. We got to make the palm fronds into swords – they stood up well and had sharp edges! Easter we had to dress up—good pants, shirt and tie, sportscoat. What little kid wants a noose around his neck or an extra appendage parents could grab as you went careening past them.

As for favorite candy, I am addicted to jellybeans—and not those fru-fru designer varieties. I’ll even take your black ones if you don’t want them.

Loved this on Peeps. I only became aware of the Peeps conspiracy a few years ago. I thought they'd only infiltrated Easter. Oh, no....

Paula, I laughed when I read Carla's response to my blog when I posted it for review and even more when she sent me her pictures. I wish I had more room to have posted all three pictures she sent me. I had read about the invasions of Peeps, but until I saw those pictures, I had no idea how serious it was.

As for a murder weapon, well my series is going month by month, and I'm only starting on September now (my 4th book in the series) so it will have to wait until book 10 or 11. :-)

Jim, I like Palm Sunday, too, but more for the parading into the church with our palms and singing "Hosanna," and then the later the rather emotional, for me at least, reading of the Passion. My dad and later husband always made our palms into crosses, something I've never quite mastered with that neat little twist in the middle. I imagine my boys used them as swords, too, but I don't remember that. I've never cared much for jelly beans, any more than the Peeps. Give me chocolate.

What a fun post, Gloria! The still-growing Peeps culture boggles my mind. I'd rather eat chocolate or those black jelly beans that I'd heard only come out now for Halloween.

Kath, you became aware of the Peeps conspiracy before I did. It was only this year when reading about the Peeps 60th anniversary in the newspaper, and then they didn't mention any conspiracy. It took Carla to tell me about that.

My kids are not to old for a scavenger hunt!! They loved it when you did that for them!! Matter of fact, I do not think I am too old for them!! LOL You only get old when you stop living!!!

Ronda, I'd rather eat chocolate, too. If the black jelly beans contain licorice, they would be good for stress, I think. At least I read that years ago.

Sue - ain't gonna happen this year. I'm not going out in this sloppy weather to hide plastic Easter eggs, and it's supposed to rain Sunday. Maybe next year.

My favorite Easter candy is the Robin Eggs. I like them better than traditional Whoppers, because of the candy coating that turns your tongue blue, or pink, or whatever combination of colors you eat.

My favorite way to eat Peeps is when they're a little stale. They have more substance & are chewier then . . . Yum!

One of my granddaughters is crazy for peeps. Luckily, her birthday is in March and they're usually available for her.

I wonder why they remind me of Twinkies.

Thanks for the reference! I did a lot of research with sausage for that book. (I didn't actually put it down anyone's throat, though.) So if you use Peeps as a weapon, you'll have to stock up for research purposes.

Easter is very early this year, so I'm sure Orthodox Easter is late--probably in May.
My favorite candy was jelly beans, and when jelly bellies came along, I was hooked. Now the kids seem to like the carmel Cadbury eggs.
Peeps! Yuck. To use them as a murder weapon, I think smushing a bunch of them together and smothering the victim might work. Then the killer could arrange more of them on top of that in some interesting or gross way. Something that points to why the victim was killed.
Patg

Alyx, I've heard more than one person say they liked them better stale, too. I think the only way I might like them is roasted over a campfire.

Kaye, I'd forgotten exactly how that murder was committed in CHOKE since I haven't read it since it first came out. Yes, a March birthday is good for your granddaughter. That way you don't have to freeze them to have them on hand.

I like your idea, Pat, of smushing them as murder weapon by smothering the victim, and then arranging them in a way that leaves a clue to the murderer. Hmmm.

Hi Mom, I remember those easter egg hunts and what fun it was. I also remember those gross PEEPs. Not a favorite of mine! I will sadly miss the family gathering this year.I love the picture of my "Brat" cat and Maggie with the PEEPS! Thanks for the big smile. I miss the pets, but I miss you more...Love, Mary

Of course, the E. B. in E. B. Davis stands for Easter Bunny, you already suspected that. My favorite Easter candy is the birds' nests by Russell Stover. They are now called coconut nests, and the company has cheapened their product. I called them birds' nests because it used to be that the nest was made of milk chocolate and coconut. The nest was filled in with three jelly bean birds' eggs. Now--no jelly beans, the cheap SOB's. Anyway, I can't eat peeps because all I can taste is the sour dye in them. Not that I haven't bought them to fill in Easter Baskets, but I can't eat them. Have a Happy Easter, everyone!

Brat Cat misses you, too, Mary, and I wish you could be with us, too.

Well, of course, E.B. stands for the Easter Bunny. What else. :-) I'd forgotten about the little birds' nest candy. With chocolate and coconut, I loved them, too.

This blog gives me hope. The evil occupation may one day yet be stopped!

I'm doing my part, Carla. Thanks for bringing this evil occupation to my attention, otherwise I would never have known about it. :-)