Christmas Story
Wishing a happy holiday to everybody. My gift to all of you is the story below.
Warren Bull

Many years ago in Beckley, West Virginia, a coalmining camp, there lived a family named Wilson with four sons and one daughter.  Like all of their neighbors, they were poor. However they were healthy and happy, enjoying each other’s company all year long but especially at Christmas time.
They liked the caroling, the church service and, although they did not have much they liked giving each other presents for special occasions.
In the town there was a company store that sold things people needed like flour, salt and work shoes.  But the store manager, James Hall, tried to spruce up his stock for the holidays.  One year in addition to wreaths and ribbons, he displayed an eight-piece tea set, even though when it found it in his storeroom he didn’t remember how he had acquired it.
When young Amy Wilson saw the set she thought it was the most beautiful thing she had ever seen.  The saucers and cups were ivory and cobalt in color, trimmed in gold.  The storeowner, abandoning his usual disinterest, showed her that when a teaspoon gently tapped a cup, it made a sound like a bell. The teapot showed an exotic animal Amy had never seen before. The owner explained it was a dragon. 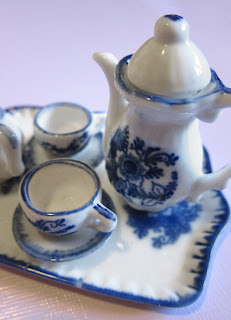 Her older brothers noticed that she stood looking at the set as if mesmerized.  It cost more than anything any of them had ever owned.
Ma and Pa Wilson gave useful gifts at Christmas. Each child got new shoes and warm clothing big enough for them to grow into during the year.  If there was any extra money they might get nuts or even an orange.  They didn’t expect gifts from the children but they encouraged the children to do something special for each other such as doing chores assigned to someone else.
On Christmas Eve morning Ma got a call that a neighbor was ailing. She left a stew simmering and went off to help.  Pa got a call offering the chance to work overtime, servicing machines at the mine. With money always scarce he gladly took the job and told the children not to expect him until early on Christmas morning.
The youngest son, David, had saved the dime he got for his birthday and pennies he earned doing odd jobs for the neighbors so that he could, for the first time in his life, buy a Christmas present.  Since he could only afford one present, he decided to buy something for Amy.
He prowled through the aisles of the story, asking the price of dolls and hair ribbons before settling on a round cherry-filled chocolate candy as his gift.  He clenched the paper bag holding his present tightly and when he got to his family’s modest cabin he slipped the candy into Amy’s stocking hanging on the hearth. Then he went off to bed thinking about how happy and surprised Amy would be tomorrow on Christmas day. 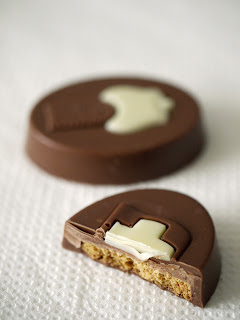 His older brother, Caleb, came in later from chopping wood for a neighbor. He noticed the round bulge in Amy stocking. He knew his older brothers and parents were not home yet. How could there be a gift for his little sister?  To satisfy his curiosity, he reached into Amy’s stocking. Caleb pulled out the chocolate.  It looked so good that, without even thinking about it, he popped it into his mouth and swallowed it.
Caleb was immediately horrified by what he had done.  He saw that only his two younger siblings were home.  He figured out David must have somehow come up with enough money to buy Amy a Christmas candy.  Caleb knew he had to replace the gift. He counted out the money he had received for cutting wood and added all that he had saved from doing extra chores.  As he headed out the door he passed his older brother, Ben who was headed toward the cabin.
Ben was every bit as curious at Caleb.  When he saw his younger brother walk rapidly away from the cabin, Ben waited for a few moments and then turned to follow Caleb to see what he was up to.  Ben followed Caleb to the store and waited outside until he left.  Once, Caleb left the store carrying a paper bag, Ben entered and asked the storekeeper what his brothers had purchased.
Upon learning that David had bought a round chocolate candy for Amy earlier that day and that Caleb had rushed in searching for a round gift before deciding on a saucer, Ben made a pretty good guess about what had happened.   Ben had enough to purchase three cups and two saucers.  He left the store, whistling Silent Night.  When he got home he noticed that Amy’s stocking held a round shape.
Smiling, Ben slipped a cup into Amy’s stocking to join the saucer Caleb had already put there. Then he placed his own bag next to the stocking and labeled it: To Amy.  Ben went to bed secure in the knowledge that on Christmas morning Amy would be the proud owner of three of the most beautiful cups and saucers that she had ever seen.  As it turned out he was wrong.
The oldest brother, Adam, had headed home only to see Ben trailing Caleb through the snow.  Adam worked in the mines with his father and hunted on weekends.  He easily avoided being seen by his brothers and waited until both were through before entering the store.
The storekeeper greeted him with, “I was wondering when you’d show up.  You Wilson boys have all been in my store tonight starting with the youngest and ending with the oldest.”  Bemused, he told Adam about each visit and every purchase.  Although Adam did not fully understand what had happened, after hearing what the owner said he took out money he had saved from various jobs all year long and bought the rest of the cups and saucers.  When Adam got to the cabin he added one cup and one saucer to Ben’s gift. He printed Amy in big letters on the bag he brought from the store and fell asleep dreaming about Christmas Day.
Ma and Pa each came in early on Christmas morning.  Amy awoke when they came in but she knew it was too early to celebrate the holiday so she went back to sleep. 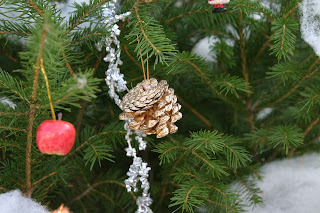 Christmas morning was full of surprises. Amy was amazed and delighted that her stocking held a beautiful cup and saucer with a note that said, “from David.” David was even more surprised that the chocolate he bought had transformed into a cup and saucer.  Caleb smiled knowingly until he found that his gift had changed from one cup into a cup and a saucer.  Ben was no less amazed to find out that his gift had also multiplied by itself.    Adam was happy to see that his brothers had each sacrificed to make each other and Amy happy.
Ma and Pa allowed as they had never seen anything prettier than the cups and saucers.
Not long after breakfast someone knocked on the cabin door.
“Who could that be?” asked Ma.
Pa got up and answered the door.
“Merry Christmas,” said the visitor.  It was the storekeeper, carrying something wrapped cloth.
“Mr. and Mrs. Wilson, your boys cleared me out of tea cups and saucers last night from the fanciest tea set I ever had.  Unfortunately they left me this.”
He uncovered the teapot showing a dragon.  “Nobody will buy this teapot without the matching cups.  It’s just taking up space that I could fill with something that would sell if I could get rid f it. The least you could do for me is take it off my hands.” He set it on the table.
“Can you sit a spell, Mr. Hall?” asked Ma. “I’m sure I have some tea left we can sweeten it with honey.”
“Thank you,” said the shopkeeper.  “But I have an errand or two to complete before I can join my family.  On the way I thought I’d see if you could be convinced to relieve me of this unsellable item. I’d hate to have to haul it back to my store again.”
“Thank you,” said Amy.  “It’s beautiful.”
After the storeowner left, Amy removed the lid of the teapot.
“What is that wonderful smell?” she asked.  “It reminds me of oranges.”
“Let me see,” said Ma.  She reached into the pot and pulled out a packet.
“It’s spiced tea.” She pulled out another packet.  “ And sugar.  Even if he couldn’t have sold the pot, which I don’t believe, he surely could have sold the tea and sugar.”
“I’ve never known that stingy man to give anything away,” said Pa.
“Just because you haven’t known about it doesn’t mean he hasn’t,” said Ma.
“You’re right,” said Pa.  “It’s Christmas.  Let’s have a cup of tea. I’ll get my fiddle and we can sing Christmas Carols.”
For the rest of the winter every time it snowed Mr. Hall found the steps and porch of his store swept clean. He never saw anyone sweep it.  No matter how much wood his potbellied stove burned the woodpile outside never got low.  He never could catch anyone adding to it.  He had his suspicions, though.
THE END
Posted by Warren Bull at 12:00 AM

That was a beautiful story!! To prove it I'm crying all over my keyboard.

And here's a Christmas miracle from your story. When my mother died, I inherited a beautiful blue and white dragon tea cup and saucer. With this story you've given me back my parents and added something special to the cup and saucer. Which is coming out of the china cabinet to be properly used from now on!
Thank you!

The true meaning of Christmas. May we all find it in our hearts every day of our lives.

Thank you for the beautiful story, Warren!

Thanks for the wonderful story, Warren. Here on Hatteras Island, I went to the grocery story and found two little boys selling mistletoe. Of course I bought a sprig. One of the little boys offered to carry my bag of groceries to the car. I offered him a dollar, which he refused. It was one of my best Christmas gifts this year.

Christmas is over, the house is quiet and snow is falling - a perfect time to reread your beautiful Christmas story again. Thank you, Warren.

What a lovely story! Thank you for sharing, Warren.