The Power of Dialog 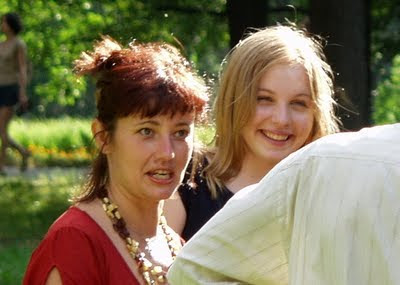 The Power of Dialog

One way writers can quickly demonstrate the nature of a character they are writing about is to put that character into a particular situation and simply have him or her speak. I purposefully left out everything but the characters’ words in the four examples below to demonstrate how a character’s speech alone gives a sense of the character’s emotion, background, the tone of the writing, and a hint of possible conflict and/or humor to come. Don’t you get a vivid mental picture from these snippets? Of course the authors amplified and expanded their work in each case, but I wanted to show effect of the dialog in isolation.

Bette Davis is unforgettable as “Madge” in the movie Cabin in the Cotton, screenplay by Paul Green. When talking to a possible suitor, “I’d like ta kiss ya but I just washed my hair.”

Susan Ferguson’s unnamed character in the short story “Pearls” in her short story collection Gaze suggests to her writing group that they have a retreat at her farm. “What do you think? It would be primitive. It would be cold and there won’t be enough water. And flies— this time of year there will be hundreds of dead flies. And no furniture. Well, some furniture, but no beds. Not beds like you’d expect. Sofas. And there’s no phone. But we should do this. It will be fun.”

In Death on Demand, Carolyn G. Hart’s hero, Max Darling, hears his ex-girlfriend answer the phone with the name of her new bookstore, “Death on Demand.” He responds with, “Do you provide a choice? Defenestration, evisceration, assassination?”

In my short story “A Detective’s Romance” from my short story collection, Murder Manhattan Style, the character Mary Beth enters the office screaming and then explains. “Sorry about the rebel yell ya’ll. I thought I spotted some Yankees before I remembered I was in New York. Nearly everybody here is a Yankee. Of course, I’m not talking about Lou Gehrig, Joe DiMaggio and their lot.”

What is your favorite example of how compelling and enlightening a character’s words can be?

"My dear, I don't give a damn." Rhett Butler to Scarlett O'Hara
Gone With the Wind
Margaret Mitchell

Warren, I loved Bette Davis's line--it says so much. And your story, Mary Beth's paragraph, is so telling. I MUST read the story. I love the character already.

Rhett's line is another classic. Who could ever forget?

One of my favorites is Blanche DuBois's from Streetcare: I have always depended on the kindness of strangers.

Ellis, Great. As I recall that is very early on and part of our introduction to the character.

Both Rhett's and Blanche's are two of my favorites, too. Interesting that these are both from the screen, rather than the page. But plays and movies are good things to study for dialog since they rely on it more than novels and stories.

Actually Kaye--mine is from the book. The screen version is, "Frankly my dear, I don't give a damn." Looked that one up before I posted because I was afraid that I'd get it wrong. But the truth is, I think the movie dialogue is more memoriable.

Warren, I love dialogue driven books. I love it when the author gives the reader credit to use his imagination and doesn't beat him over the head. That doesn't mean I like to be confused either.

Here's a few lines from Harlan Coben's JUST ONE LOOK. I simply turned to a page in the book and looked for dialogue. See if you can't pick out the tone the author is trying to convey for these characters.

"So for now you do nothing?"

Daley put down the pen. He leaned forward, his forearms on his thighs. "May I speak frankly, Mrs. Lawson?"

"Most of the cases--no, more than that, I'd say ninety-nine out of a hundred--the husband is just running around. There are marital problems. There is a mistress. The husband doesn't want to be found."

"That's not the case here."

He nodded. "And in nine-nine out of a hundred cases, that's what we hear from the wife."

Thanks for the responses. "The game is afoot."

One quote I often think of is from Alice in Wonderland. "Curiouser and curiouser!"

In Dennis Lehane's MYSTIC RIVER, a tough guy calls his wife to let her know he's waiting outside the park for news about his missing daughter.

Wife; "On the fucking street. Why aren't you in there?"

"They? Who the fuck are they? Is she their daughter?"

"You get in there. Jesus. She could be hurt. Lying in there somewhere, all cold and hurt."

The wife is a step-mother and Jimmy had wondered about the relationship between his second wife and hsi daughter.

Pauline, that dialog shows the type of person she is and her relationships with her family members.

Granted it's a first line in the first person, not part of a conversation as such (although it can be argued it starts a conversation with the reader), but Moby Dick's "Call me Ishmeal" sets up a heck of a lot. It's not necessarily his real name, suggesting a symbolic use both possibly specifically and generically as an "everyman"; the mere fact that it is a name from the Bible, suggesting not just more symbolism but, more concretely, that the narrator is a member of a "God fearing" society.... Here we know from the start that we'll be getting more than just a rollicking sea story (no mere Typeee here, or even a Billy Budd, though that has meaning beyond its surface too).

Jamesdorrwriter, Yes, I considering using that as an example. It sets the expectations for the entire work. Very good example.