Is it Drama? Or is it Melodrama?

A long time ago, in a land called High School, I was given a writing assignment: write a story full of drama. For a week, the teacher let us write during class. On Friday, she read some of the results out loud.

What is drama? I wondered this at the time, and wonder still sometimes. Does drama require excitement, or is it an in-depth look at characters? Does drama mean overt conflict and a fulfilling denouement?

To high school students, “drama” translated to shootings, explosions, girls breaking up with boyfriends, touchdowns with 0 seconds left on the clock, drowning children rescued from overflowing creeks, a rodeo, and a mean school librarian opening her card catalog to find it full of baby snakes. (That writer got sent to the principal, if I remember correctly. Hopefully, he got send to the school counselor, too.)

The best story ended with a car plummeting off a cliff. 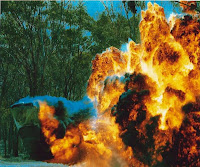 It was the best for two reasons, the teacher said. First, it contained internal and external conflict: the driver (a killer on the run) chose death over jail. Second, the car didn’t zoom off into air and land in a huge fireball. At the edge, one of the tires got caught in a tree stump and, for a few seconds, the car hung at the precipice. It was just long enough for the driver to think he was thwarted, and for the reader to think he might get captured. But the driver jerked the wheel, the tire spun and…fireball.

The class liked that story. (It was not the most popular; that was the baby snakes story, of course. Remember high school?)

My story was not read aloud. I’d written about a girl who had told a terrible lie and got caught by her father, who told terrible lies on a regular basis. This was the girl’s first lie. She stuck to it until Father pulled out the family Bible and demanded that she swear on it that she was not lying.

I wanted to dramatize internal angst, because that’s what I liked to read at the time. But how could I make internal suffering dramatic?

I decided that, when faced with her Father and the outstretched Bible, her knees knocked; her heart hammered; her sweet round face flushed the color of a rose. She tried to swear, but the untrue words would not pass her trembling lips. Her outstretched limb fell from the Good Book like a withered vine dropped from off a tree.

Yeah. That was my idea of drama. All these years later, I remain grateful to my teacher for NOT reading that aloud. And for the comment she wrote on my story:

What’s the difference between drama and melodrama? According to various reference sources on my professional bookshelf, melodrama is a work containing overblown emotional content combined with over the top action. In writing, that may mean too much sentiment and clichéd phrases; overusing adjectives and adverbs; indulging in emotionalism rather than credible responses.

Or, to put it simply and harken back to the beginning of the post, drama is a rational reaction to an event; melodrama is how a teenager would respond.

Don’t get me wrong—I like teenagers. One of the reasons I like teens is because of the melodrama. Now that I’m an adult, I understand that if I get a bad haircut, it will grow out; if I wear the wrong skirt, I won’t be shunned for life; if my boyfriend dumps me, my life isn’t over. I remember those feelings with sentiment now. I think it’s valuable as a writer to recall that time, when feelings meant more than sense or logic.

When reading a book for adults, however, I expect the writing to reflect sense and logic. That means that emotional moments deserve accurate, respectful descriptions, not a pile-on of adjectives and adverbs. If a character is suffering, I want to be moved by the conflict, not steamrolled by sentiment. I can’t feel empathy if I’m rolling my eyes.

In other words, I will connect more with a character who simply removes her hand from the Bible than one whose limb falls away like a withered vine. I want to feel the suffering, but as a mature adult reader would. When a man walks away from his lover, tell me her heart felt torn in two to see him go; don’t tell me it felt caged like a bird within her chest, beating uselessly against the bindings that would not loosen, not now, or evermore.

But, like many things in writing, drama and melodrama pose a conundrum. When I asked my teacher to give examples of the two, she thought for a while. Finally, she asked if I had seen Gone With the Wind. When I said, yes, of course, this is the South, what kind of question is that?, she said, “The burning of Atlanta is drama. ‘Frankly, my dear, I don’t give a damn’ is melodrama.”

Which, to be perfectly honest, didn’t help at all. Can you imagine GWTW without the melodrama?
Posted by Ramona at 12:10 AM

I remember in high school describing someone as having thoughtful brown hair. The teacher asked me if I was really that sentimental. Sentimentality was the no-no for my English teachers and I think their idea of sentimentality corresponds with the melodrama you refer to--fancy words and images when the simple fact or act is drama enough.

I tend to associate melodrama with a send of humor or comedy.

I like #s 3 & 4, arresting, forceful, powerful, expressive. The same online dic has melodrama as:
A drama, such as a play, film, or television program, characterized by exaggerated emotions, stereotypical characters, and interpersonal conflicts.

Kaye, I think the real difference in drama and melodrama is in presentation. Melodrama takes an incident and describes it with a lot of sentiment and emotional language, what we would also call histrionics. Drama is more straightforward.