A Christmas Journey by Warren Bull

A Christmas Journey by Warren Bull

It was Christmas Day with no presents; no tree; no home; no holiday meal. Kenny looked out the window of the passenger rail car. It was covered with raindrops that slid down the glass like kids on sleds whizzing down Daredevil Hill.  He pretended the drops were racing and urged his favorites on. The rain-covered window gave halos to lights the train passed.  Kenny decided red, green and yellow traffic lights could be wreaths of holly with berries, leaves and gold ribbons. 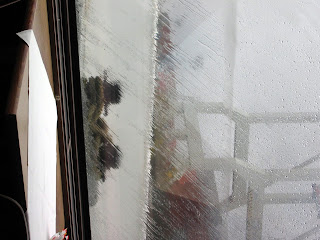 Mom slumbered, moving with the rhythm of wheels on the tracks, as if she were a child being rocked in her mother’s arms. Mom fell asleep a few seconds after she sat down. Kenny hoped the new job they were headed for would pay enough so she wouldn’t have to sprint to a second job as soon as the first job ended. 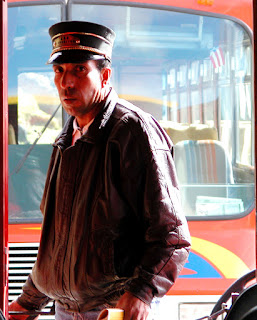 The Conductor walked by and smiled at him again. Kenny looked around the car at the few people riding along with him. A man in some sort of uniform snored in a seat far back behind him. Kenny had noticed that when the man entered the car he stepped slowly and carefully as he passed. The odor of beer preceded him and followed behind him down the aisle. Kenny thought the man was smart to let the engineer do the driving. A woman in a long, plain dress, wearing her hair in a tight bun had walked by looking at the floor. He didn’t see her when he looked around. Maybe she moved to a different car. The final passenger was an old man with white hair that needed a trim. He was clean- shaven and dressed in neat, clean but worn clothing.
The old man sat across the aisle from Kenny and Mom. He nodded off before the train left the station. Almost as if he could hear Kenny thinking, the old man’s eyelids fluttered and then opened wide.
“Hi, there,” he said to Kenny. “I slept soundly. I’ve been working hard so I needed it.”
“Like my mom,” said Kenny.
“Yes, My name is Chris. What’s yours?”
Kenny scrunched up his face.
“Mom told me not to speak to strangers.”
“She’s wise to do that. You never know. Do you think she might have been talking about strangers on the street or when somebody you don’t know comes to the door? She might make an exception for when you’re riding on a train. I can’t steal anything and run away. There isn’t anywhere to run to on a train.”
Kenny smiled.
“I think it would be all right. My name is Kenny.”
“Good. I’m glad you decided to talk with me. It’d be a long, lonely trip if you hadn’t.”
“Mom tells me to be polite too,” said Kenny. “Why are you riding on a train on Christmas Day?”
“I just finished a big job and I need to get back home. The train will take me part way and I can sleep when I need to. How about you?”
“We’re moving to a city where Mom’s going to start a new job. There will be kids for me to meet and a good school. I hope Mom likes her job better than the jobs she left. She had to work all the time and we didn’t have much money.”
“I hope so too,” said Chris. “So tell me, what did you get for Christmas?”
Kenny looked down. “Mom explained that because we’re moving Santa might not be able to find us for a while. I’ll get something someday.”
Kenny looked up. “It’s okay. Really it is.”
“Whoa, talk about a big job,” said Chris. “Think about what Santa has to do.”
The Conductor strolled toward them coming from behind Kenny.
“Did you ever wonder about how Santa can get to every house in the world in just one night?” asked Chris.
The Conductor stopped. He frowned and tilted his head.
“It ‘s a pretty gigantic job,” said Chris.
“Yeah,” said Kenny.
The Conductor shook his head.
“I’ll tell you something you might not know,” said Chris leaning toward the youngster.
The Conductor waved his hands back and forth and mouthed “No.”
“Santa has helpers,” said Chris. “When he can’t get to someone, he’ll send somebody else.”
The Conductor let out a breath and lowered his hands.
“You never know who might fill in for him. It might be someone like Joe, the Conductor, or even a total stranger. In fact I have a little Christmas gift for you. Sixteen cents.”
Chris reached into his pocket, took out some coins and looked at them closely. He picked out three coins,
“Here you go.” He handed them to Kenny.
“Um, thanks,” said Kenny taking the coins and moving his hand toward his pocket.
“Hold on there, Buckaroo,” said Chris. “Look at those coins before you stuff them in your pocket.”
Kenny examined the coins. His eyes widened.
“Wow.”
The Conductor came over to see the coins.
“I know that one,” said the Conductor. “It’s a buffalo nickel.” 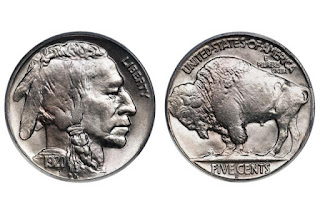 “Look. It has an Indian’s head on the other side,” said Kenny.
“That dime is called a Mercury dime,” said the Conductor.
“Yes. The figure is actually a winged Liberty head,” said Chris. “It’s silver.”
“Really?” asked Kenny.
“Sure thing,” said the Conductor.
Kenny picked up the penny.
“It has Lincoln on it,” said Kenny.
“Turn it over,” said Chris.
Kenny studied the coin.
“What’s around sides of the back?”
“Those are stalks of wheat,” said Chris.
“I haven’t seen one like this before,” said Kenny.
“It’s much older than you are,” said Chris. “Do you see what you might have missed if you’d just stuffed them into your pocket?”
“Yeah.”
“You can learn a great deal by paying attention. Something that looks ordinary at first glance might actually be remarkable. I have something for your mother too,” said Chris. He handed Kenny a sealed envelope.
“You can not tell her about it until half an hour after you get off the train. Promise?”
“I promise,” said Kenny, folding the envelope and cramming it into his pocket.
“The next stop is yours,” said the Conductor to Kenny. “You might want to wake up your mama.”
Kenny rubbed his mother on the shoulder. She opened one eye slowly.
“We get off at the next stop,” said Kenny.
When the train halted Kenny and his mother gathered their things and walked off the train and onto the platform. The Conductor brought their suitcases. He waved away the offer of a tip.
“No Ma’am. That cab over there will take you wherever you want to go for no charge. It’s my Christmas present to you. Now, don’t go and hurt my feelings by refusing.”
The cabdriver hustled their suitcases into the trunk. He opened an umbrella and held it over Kenny and Mom as they walked to the cab.
“Do you know of a good, inexpensive motel in the downtown?”  Kenny’s Mom asked the cab driver.
“Yes, Ma’am. I know just the place.”
Once in a small but immaculate room in the motel, Mom turned toward Kenny.
“Things are going to be a little tight until my first paycheck. It’s a new job so I don’t want to ask for an advance on my wages. We’ve always made it through tough spots together and we can do it again. Why are you staring at the clock?”
“Did we get off the train half an hour ago?” asked Kenny.
“About an hour ago, why?”
Kenny pulled the crumpled envelope out of his pocket and handed it to her.  She opened the envelope and gasped.
“Who gave you this?” she demanded.
“A man on the train. He sat across the aisle from us.”
“What did the two of you do together?”
“We talked,” said Kenny.
“Just talked?”
“Just talked. The Conductor talked too.  The man gave me sixteen cents as a Christmas present. Do you want to see?”
“Yes, but not now. He didn’t touch you?”
“No. He gave the envelope to give to you and said I had to wait for half an hour after the train left before I could give it to you.”
Kenny mom said down on he bed. She peered into the envelope again.
“What was his name?” asked Kenny’s mom
“Chris,” answered Kenny. “I don’t know his last name.”
Kenny’s mom reached into the envelope. She took out five one hundred dollar bills.   She spread them like a fan in her hand.
“I wonder,” she said softly. “I don’t really believe it but I wonder. Could his last name? Could it really be Kringle?” 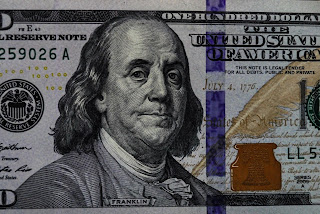 I love Christmas stories with mystical, happy endings! This is a great one.

Thanks, Warren. I enjoyed it.

What a beautiful story, Warren. Thanks for sharing it with us.

A great Christmas story. Thank you!

Thank you for the uplifting story, Warren!

It sounds like fantasy, Warren, but my mother's experience adds authenticity to your story. Her father was a stockbroker during the 1929 crash. He lost a few friends when they committed suicide due to their financial straits. He didn't. He went to work on the Pennsylvania railroad--probably as a conductor--don't really know. They moved from apartment to apartment after failing to pay the rent, sometimes in the middle of the night. There was a program she wanted to attend, but her parents didn't have the money. Walking home from school one day she found an envelope that contained enough money to pay for the program. Providence? God's gift, Chris Kringle? She never knew, but she always remember and told the story. Have a wonderful holiday, Warren. Thanks for the story.

A very touching Christmas story, Warren. Thank you. And filled with a message about the true meaning of Christmas giving.

Wishing you a very merry Christmas.

Lovely story, Warren. Touching, heartwarming, and just right for the holidays. Thanks for sharing.

By using Car Rental 8 you can discover the cheapest rental cars at over 50,000 locations worldwide.