This is the second installment of my Christmas short story. Please see the first installment here. Hope you enjoy it! E. B. Davis 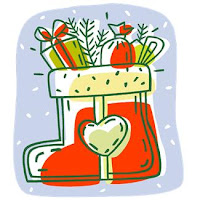 A few days after Ashley’s driving lesson, Janet sat at her kitchen table wrapping gifts while enjoying a Christmas CD. With Ashley at school, her hours alone felt oppressive. This Christmas marked the third without her husband. Their strong marriage had survived the lean times and had grown during the flowering years of Ashley’s birth and childhood. As big as Steve had been, his death had created an equally big void. Tears fell from her eyes. She gasped at the sudden feeling of loss. Finding a man as loving as Steve wouldn’t be easy.

Closing her eyes, she examined her feelings and discovered unacceptable self-pity. Taking emotional control, she rose from her chair to provide a diversion, grabbed a tissue from the box on top of the refrigerator and wiped her eyes.

Her jingle bells hung on the kitchen door’s knob. She gave them a shake. Jingle bells reminded her of Christmas like no other sound. After years of decorating her parents’ home, her mother, knowing of Janet’s love of them, had given the bells to her. They symbolized the Christmas’ of her youth when everything was new and possible. Leaning against the door, she conjured visions of Christmas at her parents’ house and candle-lit church services. Smiling through memories, she knew the magic of the season still lived within her.

That magic spurred Janet to accomplish the tasks on her list, one of which was a dreaded trip to the mall. But, she reminded herself, it was a necessary means toward an end. She finished wrapping and tidied up before driving to the mall.

Her Christmas list contained three items, including the exchange of a gift that she’d bought for a friend. She found no parking spaces in the mall’s front lot. Refusing to compete for a space against other drivers, she drove to the back lot and found a space nearby the Crofton’s Department Store’s loading dock. The gas leak worried her. But if other cars were parked there, she reasoned, they must have contained the leak.

Three inches of snow covered the parking lot. Janet sighed, thinking again of the past. Store personnel used to make sure the parking lots and sidewalks were clear for customers out of consideration. Now, no one bothered. So much for customer service, she thought.

Carefully walking by the deserted loading dock, she smiled, remembering Dimples, and looked for him. Another man now stood on the dock. He must have thought her smile belonged to him, judging from his visual examination of her. Embarrassed, she nodded in his direction and kept walking to the mall entrance.

Several hours and shopping bags later, Janet entered Crofton’s and went to the returns counter to wait her turn in the long queue. At the counter, she told the sales associate, “I can’t believe my friend lost so much weight. She needed to lose it, but at this time of year, I didn’t think she’d succeed.”

“That’s great for her. But I’m afraid that I can’t refund this gift. It’s a food item.”

“But it’s unopened. I can’t possibly give my friend Belgian chocolates when she’s succeeding so well on her diet. See the package? The wrapper is just as I bought it. She normally loves them, or I wouldn’t have purchased them in the first place.”

“We’re not supposed to give returns on food items.”

“That’s ridiculous. It was expensive.”

“You’ll have to talk to the store manager,” the sales associate said.

“He’s upstairs in the corporate offices.”

“Not at this time of year. There’s too much going on for him to leave his office.”

“Well that’s backward. No such thing as customer service.” Janet blew out her breath in exasperation.

“I’m sorry. It’s not your fault,” Janet said, feeling sheepish at taking out her ire on the clerk.

Loaded down with bags from her shopping trip, her arms ached under their weight, and the bags’ handles cut into her hands bringing with the pain uncharitable thoughts concerning the store manager’s lack of customer service. The doors to the elevator opened as she approached.

Two Doberman-natured women lunged at the doors, knocking into her bags. One of the bag handles broke, dumping sweaters onto the floor, now covered in melted snow and street dirt. The women scooted by her. She saw one punching the close door button, which for the first time in history actually worked. The doors closed before she could pick up the soggy sweaters and transfer them to an intact bag. Tired and angry, she sighed to relieve her stress, leaned against the wall, and punched the “up” button again. When Janet finally emerged from the elevator and walked to the corporate office, the magical spirit of the season had vanished. She felt like Dr. Seuss’s Grinch.

After informing the receptionist that she needed to speak with the store manager, she found a seat in the waiting area and dumped her bags on an adjacent chair. She noticed a security camera mounted behind the receptionist’s desk pointed in her direction. What nerve, Janet thought. Customers were presumed guilty. She fought the temptation to stick out her tongue at the camera and flip it the bird.

No sooner had she leaned back to rest, then the receptionist directed her toward the store manager’s office, down the hall. The receptionist didn’t bother to get up, but pointed down the hall, “Third door on your right.” The store’s management had taken the concept of self service too literally, Janet thought.

“Thanks,” Janet snarled. She picked up her bags and walked to the office where she found a closed door. Lowering her bags to the floor, she knocked on the door. The door opened abruptly.

“Did you just kick my door?” a man asked. His cheeks folded inward toward his nose and mouth, which creased into a frown. The tall, thin man crossed his arms and hid his chest under a shield of rumpled, white dress shirt.

He looked at her as if about to dispute her word. “What can I do for you?” he asked, but remained standing in the doorway, not allowing her to enter his office and sit.

“I need to return a gift that is now unsuitable to give a friend, but the sales associates said that food items aren’t returnable.”

“Definitely, not! There are health regulations.”

“But it’s unopened Belgian chocolates. The package is just the way I bought it.”

“It’s expensive! She would normally love them, but now that she’s lost weight—”

“But I’ve returned other food items here in the past.”

“Not with me as manager.”

“Yeah, well, that’s probably true. The last store manager made sure the parking lots and sidewalks were clear of snow. The last store manager had the custodial department clean up melted snow and dirt from around the elevators. Look at my presents!” Janet reached into a shopping bag and took out the wet and fouled sweaters. “One of my shopping bags broke and dumped these gifts on the floor in front of the elevators. Are you going to reimburse me for their cost or at least the cost of dry cleaning them? The sweaters were brand new. See the tags. I just bought them.”

“Did any store personnel see the incident? Did you go directly to anyone to report it?”

“No, no one saw it. But the last store manager came down to the department rather than make customers traipse upstairs. If I hadn’t been forced to come up here, if only you’d allow refunds for perfectly good, unwrapped chocolates, this wouldn’t have happened.”

“You can’t prove a thing, and returns on food violate the law. Maybe you should read your receipts before trying to return anything. It clearly states that food items aren’t returnable.”

“And maybe you should buy new equipment for your loading dock. I bet the EPA would be very interested in your gas spill the other night.”

“What are you talking about? We have no gas stored anywhere on the premises. I’d watch what you say, if I were you. Any damage to the store’s reputation, and we’ll slap a lawsuit on you as fast as Santa slides down the chimney. Now, I have a store to run. Good day.” He started to close the door, stopped partway and said, “Have a merry Christmas.”

Aghast, Janet watched the store manager slam the door in her face. Had the man with the dimple lied to her? Marching out of the hallway, her peripheral vision caught the receptionist watching her. Janet knew she looked like a cartoon character with steam hissing from her ears, but she refused to glance at the unsympathetic receptionist as she left, feeling betrayed by the store management and by Dimples. When she found the ladies’ room, she ducked inside, placed her bags on the floor and found her cell phone in her pocketbook. As she dialed her friend, Bea Goodwin, she glanced in the bathroom mirror. Who was that unhappy and disheveled middle-age woman?

Yes, I'm afraid things get a lot worse for Janet before they get better. Thanks for reading Pauline!

I agree with Pauline--suspense mounts.

I can hardly wait,