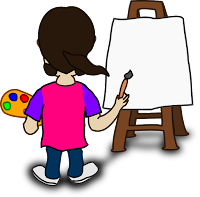 One of my mother’s favorite bromides was “Don’t judge a book by its cover.” As personal philosophy, the words have a strong moral base. As a marketing tool, they are worse than useless. Everyone judges books by their covers, even those who say they don’t.

It used to be that most people browsed bookstores and/or libraries to find their next read. How to choose? An author you know and like is always a good bet, but what if you are looking for something new? A trustworthy friend’s recommendation can get you to check out a new author. Or a review in the paper (my 95-year-old mother still reads them). For many people, the first thing that catches their attention is the cover.

Today, that cover is likely to be an electronic representation of the physical cover. Maybe it’s viewed on a computer, but it could be a tablet or smart phone, which I understand more and more people use to shop. If I search for a book on my phone, the height of the cover is about one inch.

If you are a well-known author, shouting your name on that valuable bit of electronic real estate is your best bet. When former president Bill Clinton and mega-seller James Patterson linked up for last year’s top-10-selling book, they included both names in large CAPS. The title, also in capital letters is prominent – but the President portion of the title is the most prominent—in case we forgot Clinton was president?

This cover included a version of the US flag, the Capitol dome (not the White House) and a generic man. I didn’t read it, but Goodreads reports 78 editions and over 57,000 ratings, so a lot of people have.

For designing the cover for False Bottom, the sixth Seamus McCree novel, I needed to keep the trends of big title, big name, and simple graphics in mind. Here’s another recent example from one of my favorite authors, Barry Eisler. Title: BIG. Author name: BIG. Graphics: minimal but giving the sense of a group of people running.

One thing book cover designers need to keep in mind is any series branding. That’s a problem for me since the Seamus McCree series covers have been designed by several different people.

Holy moly, what a mess: Titles range from single color to two colors and include white, yellow, red, and gray. Author name is at least consistent with James M. Jackson, but color is white or black. How do I reflect recent book cover trends and keep within the eclectic style? Should I start fresh and redesign the entire series? The time and effort and sales don’t justify a total rework.

My first draft (left) pulled the title colors from Book 5, added one graphic, played with the word Bottom. A somewhat boring background color. By the third draft (right), I had darkened the image and added texture (from a photograph of light shimmering on a lake!)

Death runs through this book and I thought the cover might remind people of wood—a coffin to go with the Celtic cross grave monument? The monument came from a picture I took at the Gettysburg Battlefield and represented the Irish Brigade—an historical fact I liked, and it tied into Seamus’s Irish roots and a continuing character, the Happy Reaper, who sports a Celtic cross tattoo.

Comments from the Guppy Chapter of Sisters in Crime Marketing subgroup included muddled, confusing, what genre? Everyone agreed they could read the title, but most didn’t like (or understand) the symbolism of the title reaching toward the ground.

By draft five (left) I had returned the title placement to horizontal, emphasized FALSE, and used a color border at the bottom to make the author name more prominent. I replaced the single-color textured background with fog and trees, shrank the Celtic cross and also eliminated much of the decoration on it (the regimental dog was asleep on the base of the cross in the original).

I sat with that version of the cover for several months before I considered how it would work with a print book. The colored bar at the bottom would need to wrap around the spine and back. I could place the Wolf’s Echo logo in that color on the spine, but the color would run through bar code, making it look wonky. I could increase the height of the band to solve the problem, but that didn’t feel right.

And so I played around with other ideas, and here is the current thumbnail (right).

For those who like print, you’ll see something that looks like the version below. The back will include a teaser of the story (some of the hardest 100 words to write) and a short blurb from a wonderful author.

Would the cover make you curious enough to pick up the book and read it’s blurb? 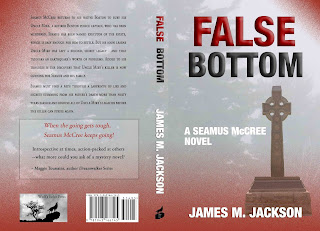 I like the final result. False bottom has so many connotations.

Thanks, Margaret. I thought the title was a great fit for what is going on in this novel on many levels.

My only comment is that, since neither the cover nor the title scream "Mystery!" you might consider adding a descriptor before the word "novel" on the cover.

With the Celtic cross, if I weren't familiar with your work, I would be inclined to think this was an historic novel set in Ireland.

The final cover is excellent. I would definitely pick it up, and it looks great in thumbnail. Well done, Jim.

KM -- My earliest Seamus McCree novels did say Mystery. Then my writing morphed more toward suspense/thriller and I changed it to novel. Point taken on the cover potentially being an historical novel set in Ireland. The blurb will take care of that misconception and because of the keywords, the book won't show up on historical novel searches.

Definitely, ended on the best cover. Great to see the progression. Excellent work.

Good final cover. It has a misty look to it, making it clear that there is mystery involved her.

I like the final cover, too. I enjoyed all the books of yours that I have read.

As for covers, my step-granddaughter makes all my covers and they all have flowers on
them since they go by the month starting with June and the tenth book I'm working on
is Daffodils in March. And yes, even if I keep writing my series which I intend to do,
I will eventually be writing another book for June and continue on. I always have a
back cover telling what the book is about so those who have not read my books can see
that they are mysteries. In my tenth book I have murdered two young men.

Gloria -- I love your story about having family pose as the dead guy for one of your covers!

Hi, Jim! I liked reading about your process as I'm going through a cover design for a short story collection. The first artist completely missed my vision even though I sent samples to work from. I have switched to another artist. I like what you did with yours.